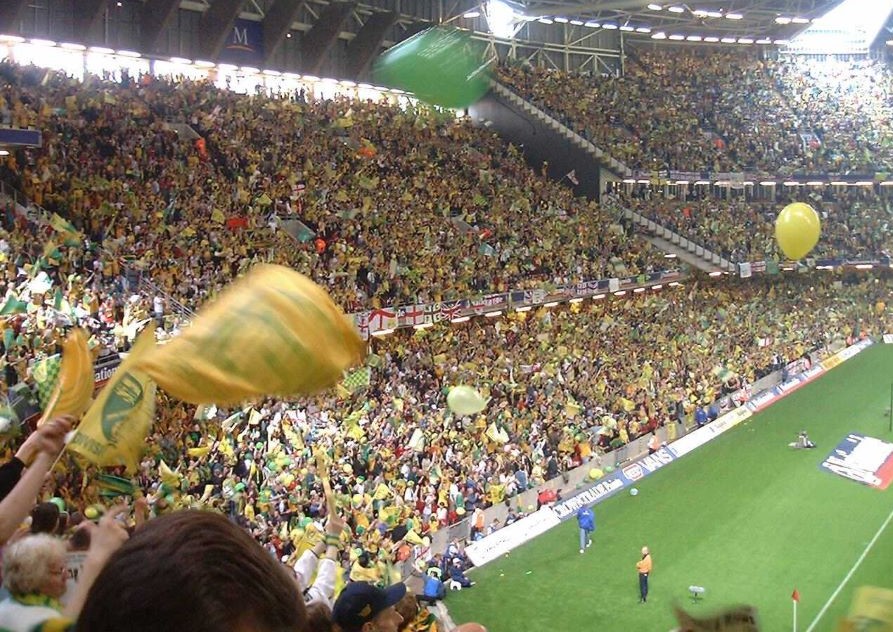 Next up for the Canaries is a trip to the second city under-achievers Birmingham City and a return to a Championship staple – the midweek away fixture.

When thinking back to past games between the two it is hard to look beyond the Play-off final of 2002 but as we shall see there have been plenty of important clashes against the Blues throughout our history.

I say history, but actually, our first-ever meeting with Birmingham came as late as 1963 and a League Cup meeting. Norwich were defending cup holders at the time and kept their proud record alive with a 2-0 victory.

A couple of seasons on from that League Cup win, we would play our first league games, Birmingham coming out on top during the 1965-66 season with a draw and a win.

This was the first of a run of meetings in the old Division Two, which cumulated in promotion for both clubs at the end of the 1971-72 season.

Before that there was one standout result, Norwich thrashing the Blues 6-0 in the spring of 1970 but, that aside, matches had generally been pretty even with seven draws in the first 13 meetings, including three consecutive 2-2s.

The 1971-72 season had become a three-horse race between ourselves, Birmingham, and Millwall, for the two promotion places. Despite picking up only two points against our rivals, including a heavy 4-0 defeat at St Andrew’s, Norwich prevailed – winning the league by a point with Birmingham finishing runners-up and joining us in Division One.

It was Birmingham that settled better to life in the top-flight, doubling Norwich, including another four goals conceded at St Andrew’s. They finished 10th while we survived by the skin of our teeth in 20th.

On 9 April 1983, the Birmingham home support witnessed yet another four-goal haul in their home fixture versus Norwich. This time, however, all the goals were scored by those in yellow and green – the Canaries picking up a remarkable 4-0 away win following a 5-1 home win in the corresponding fixture in September 1982.

An aggregate 9-1 win, I think I’m safe to say, is a Canary top-flight record.

In contrast, there were very few goals in the FA Cup saga of 1985. FA Cup replays are a dying breed these days but back in the 1985 tournament Norwich and Birmingham faced each other four times. Norwich eventually went through in the third replay 1-0 (after a 0-0, and two 1-1s).

So, we played Birmingham four times in January 1985 but it would be a decade before we faced them again, losing an early-season encounter 3-1 in August 1995.

That defeat was Norwich’s first loss in the second tier since a 1-0 defeat to Hull in April 1986 and a wake-up call that an immediate promotion back to the Premier League would not be a formality (as it happened it was not and we finished a disappointing 16th – one place below Birmingham).

Both clubs would see out the century in the Second Division before meeting in football’s biggest domestic game – the 2001-02 play-off final.

Norwich had been away from the Premier League for seven seasons, while Birmingham had never played in it.

As such it was a massive game for both and it showed in a tense and nervy affair that went to extra-time. Iwan Robert’s diving header brought joy but this was short-lived as Geoff Horsfield equalised 10 minutes later.

The game went to penalties and we all remember the heartache at the Millennium Stadium when Darren Carter hit the winning kick for the Blues.

Looking at it objectively, perhaps it was deserved with Birmingham beating Norwich twice in the league that season, including yet another 4-0 St Andrew’s win.

The winning manager that day in May 2002 was former Norwich defender and Hall of Famer, Steve Bruce.

Other notable player connections include Bruce’s fellow Hall of Famer, Noel Kinsey, who made 243 appearances, scoring 65 goals, for the Canaries during the early post-war period.

Kinsey signed for Birmingham in 1953 winning the Second Division championship in 1954-55, helping the club to their highest-ever league finish in 1955-56 as well as scoring in the 1956 FA Cup final.

The first Premier League meeting came on 27 November 2004 and was a credible 1-1 draw in the Midlands. The home fixture was the penultimate game of the season, where a Dean Aston penalty combined with Emile Heskey’s late effort hitting the crossbar saw Norwich continue their late remarkable winning run, putting themselves in pole position for survival (they, of course, ultimately fell short).

Norwich went down in 2004-05 and were soon joined by Birmingham to resume our fixtures in the second tier.

Since relegation, Norwich have held the upper hand, losing just once in the last 11 Championship games. A run that has included four wins in the last five. The only blip was the opening day of the 2018-19 season when it needed a late Onel Hernandez goal to secure a 2-2 draw – a late equaliser that set the tone for that magical season.

In context, it proved to be a huge victory in Farke’s Norwich career.

Since the 2-2 draw on opening day in August 2018, we have played Birmingham four times, winning the three league meetings and drawing the recent Carabao Cup game, only to eventually go through on penalties.