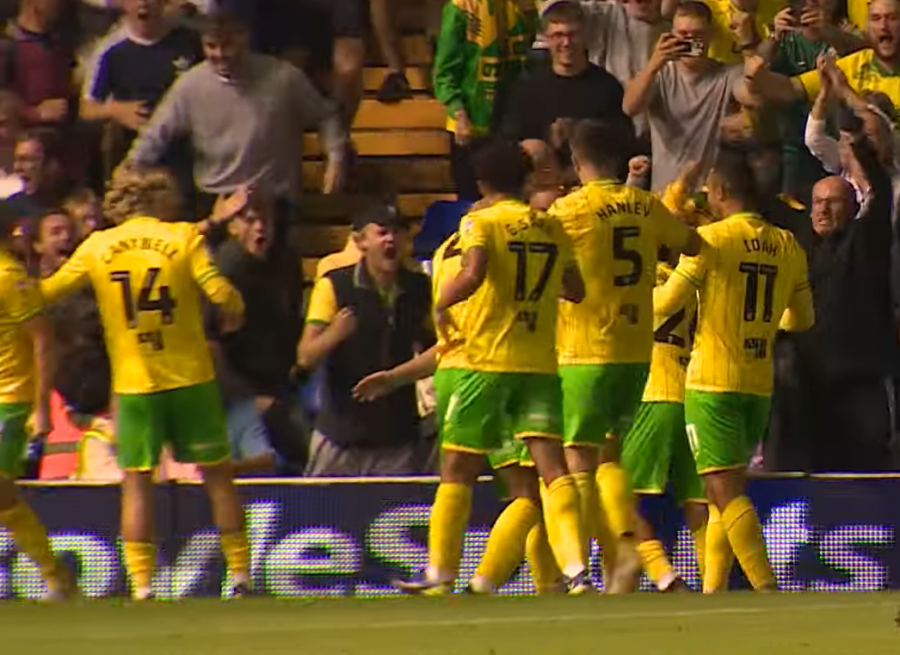 I wrote on Sunday morning about there being few more satisfying ways to win a game than a backs-to-the-wall smash and grab.

Well, last night was the perfect demonstration of one that matched it. Maybe even trumped it.

Who doesn’t love an injury-time winner?

That we did it via a similar route to the win at Sunderland made it doubly satisfying, and even more so when it took us up to second after winning four games on the spin.

Yet, still social media and, as I understand it, Canary Call was riddled with folk telling us how fortunate we’ve been, how Dean Smith is still not the man for the job, and how this mini-run is merely “papering over the cracks”.

I had a brief but cordial Twitter exchange with a self-confessed Smith-outer yesterday morning, who cited the ‘easier’ opposition City have played so far, how Dean Smith is yet to establish an identifiable style and how he still doesn’t know his best team.

All of which contain elements of logic, as does his assertion that the real acid test comes when we play Burnley, Watford and co, but you can’t choose who you play and what order you play them (unless you’re Liverpool 😉 ) and, as the saying goes, you can only beat the opposition put before you.

Twitter was ablaze with similar levels of negativity and I can only assume that some were a tad miffed when Onel’s shot whistled past John Ruddy.

Yes, we’ve only beaten teams in the bottom half of the table. Yes, there is plenty of scope for improvement. And, yes, there are much tougher tests ahead.

But to suggest we’re in a false position and only second in the table because of the weakness of this season’s Championship ignores the relentlessness and ridiculousness of this league.

Of course the quality is several steps down from the Premier League – no one knows that more than us – but its gruelling, unrelenting nature and the Saturday-Tuesday-Saturday grind make it virtually impossible to deliver performances of excellence week in, week out.

I’ll not be thanked for saying it I suspect, but even under Daniel Farke there were games that were ‘won ugly’ and where the performance level was secondary to the final outcome.

As dewy-eyed as many still are about our favourite German, it wasn’t all raindrops on roses, whiskers on kittens and perfect tiki-taka. Sometimes his teams too had to dig in and grind out a result. You don’t win two Championship titles without doing so.

Dean Smith teams are no different.

Obviously, we’re a little disappointed that it was so stodgy last night, particularly in the first half, and that the passing didn’t get even close to flowing. And it’s clear too that two or three who had revelled under the Carrow Road lights have struggled away from home. But that’s why we have a big squad.

Messrs Dowell and Sinani may have used up their lives last night or may be given another chance on Saturday, but will know that if the form doesn’t improve then there are others itching for a chance.

That’s how it works.

And we’re lucky enough to have options on the bench and beyond who can make a difference, as was demonstrated perfectly again last night.

Hernandez, as much as we all love him for all the qualities he brings, does appear more effective when coming off the bench and when he’s able to match that uber-energy up against a full-back who is starting to flag.

That he won the game for us last night and went on the mother of all celebrations made us all love him that little bit more.

But it wasn’t just Onel. Teemu Pukki made a difference, so too Gabriel Sara, and in the closing minutes, Todd Cantwell and Adam Idah helped turn the screw until the Birmingham dam finally burst.

And for it to all unfold in front of the travelling hoards, many of whom will have been at Sunderland on Saturday, made it just that little bit more perfect.

So, let’s try and savour the moment because my god we’ve earned it. We’d have given anything for four games without a defeat last season, let alone four straight wins, so to not enjoy it and instead turn it on its head and drag out the negatives seems just a little bit daft.

Am sure there will be ample opportunity for us moaners to moan as the season unfolds, but now is not that time.

Four from four, up to second, quality on the bench and a team that’s finally, after a very long time, discovered what it’s like to win a game after going behind.