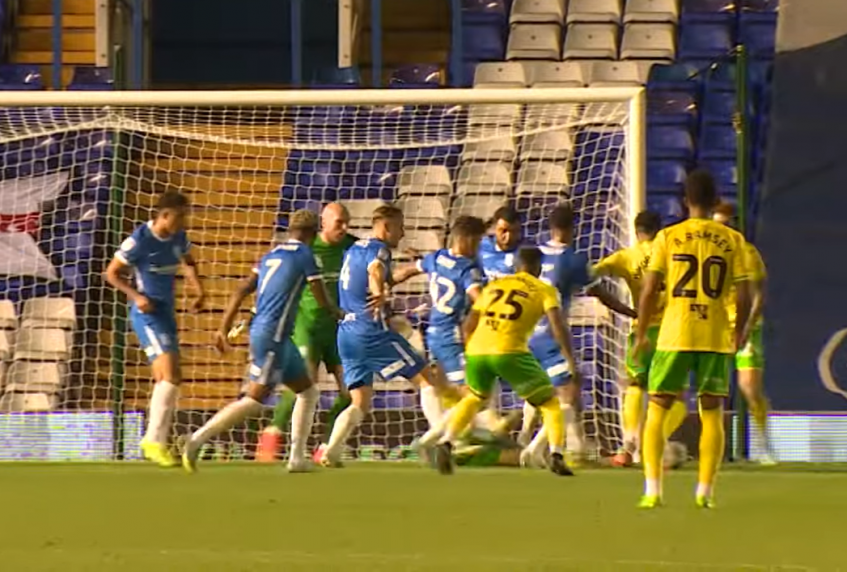 So… another scrappy game away from home in the Championship in which Norwich have managed to wrestle three points from the opposition.

This was a game that epitomised the Championship and the questions Norwich will have to answer if they are to achieve their goals this season. And they passed the test… just about… with some heroics from Onel Hernandez.

In this piece, I will delve into the narrowness of Birmingham’s set-up, wing dynamics and the change of plan mid-way through the second half.

Birmingham’s plan largely followed what they tried to do to City in the cup but with better players in their starting XI.

They played a 5-3-2 formation and looked to sit incredibly narrow, limiting the chance of penetration through the middle and ceding territory outside. They then looked to get in City’s faces by being aggressive in duels.

Their threat going forward was all about crosses into the box with the experienced pair of Scott Hogan and Troy Deeney offering the threat.

I perceive John Eustace to be an excellent manager and the way he set Birmingham up proved this. They came with a game plan that looked to frustrate and limit Norwich, mainly due to how limited their squad is, and to get anything from the game they had to be dogged.

And they were that in abundance and were excellent defensively – as evidenced by the amount of through balls Norwich were able to play. According to Whoscored, City only completed one through ball, and their progression was severely limited as a result. Norwich struggled to open them up and create chances with a limited 0.6 xG in the first half.

Wing dynamics is a concept best described as how players in the wider areas operate with each other. To have the most optimal dynamics you need balance as with everything else in your system.

I’ve spoken previously about the need for balance in the build-up and the need for a variety of where you are attacking to create gaps between defences. Wing dynamics is a further area in which you must seek balance.

To do this you need players that will do different things – for example, one player that will look to come inside and one that will naturally maintain the width. This can come with various tactical nuances, but the general premise is you need a variety.

This brings me to where I feel City struggled last night.

As mentioned, before I felt the build-up was a familiar issue with the right-footed left side of defence – too often the ball would not be effectively moved from side to side, and not stretch the opposition’s defence when they sit in a narrow low block.

But there was a further issue last night. Having both Aaron Ramsey and Sam Byram on the left-hand side meant both players were looking to cut inside onto their predominant right foot.

This facilitated Birmingham’s narrowness and it made space even more compact; making an already stubborn opposition that much harder to break down.

This can be seen above. Both players have similar profiles on the left side and want to cut inside to use their stronger right foot. As a result, City’s attacks become narrow and lacked the width to create space.

Norwich also moved the ball too slowly and lacked penetrative passes. A mixture of a narrow Birmingham side and the lack of balance across the attack meant City were severely limited.

Birmingham then exposed the lack of a defensive midfielder in Norwich’s side on the counter and made the most of a slice of luck to go 1-0 up.

It was there for everyone to see that it was increasingly likely that Eustace’s plan would work if something wasn’t changed. Thankfully Dean Smith wasn’t willing to let the game slip away and acted.

He looked to introduce some verticality to their attack with the introduction of Teemu Pukki and Onel Hernandez, and this changed the game. Suddenly Norwich was able to play quicker as they had more direct options behind the Birmingham defence.

This allowed City to bypass the issues they were having in the build-up that had limited chance creation, and is a testament to Smith’s ability to change a plan if it isn’t working. This, combined with the abundance of quality and variety on Norwich’s bench, is a positive sign.

The increased verticality can be seen in the number of long balls that were completed against Birmingham (35) compared to the vastly different game state against Huddersfield in which we weren’t limited in the build-up and were able to sustain pressure (22).

This shows that City were able to identify their struggles and come up with a solution to win the game. It may not always be pretty but it achieved the three points when, at one point, it looked like we were going home with nothing.

On an evening that was frustrating and a painful watch at times, Norwich found a way to come away with three points.

The factors that limit this Norwich side, as previously discussed, are yet to be resolved, and the struggles in build-up and efficient chance creation still are yet to click into gear.

Also, at one point in the game, I watched Kenny McLean chase back on the defensive transition and he looked slow, which made me wish for Isaac Hayden’s swift return to shore up our main defensive weakness.

I keep questioning during these matches that for all our dominance, do we do enough to win it And then we go on to win it! I’m, therefore, inclined to think that there are improvements to be made but we are also doing a lot of things well.

For me, Smith is underappreciated by Norwich fans. He is developing a system that will be effective at Championship level and will hopefully make us competitive at Premier League level.

The comparisons that conclude this football is in stark contrast to Daniel Farke’s are wrong. We follow similar patterns but with a less dogmatic approach to ideology.

This was in Norwich’s favour last night and won them the three points.