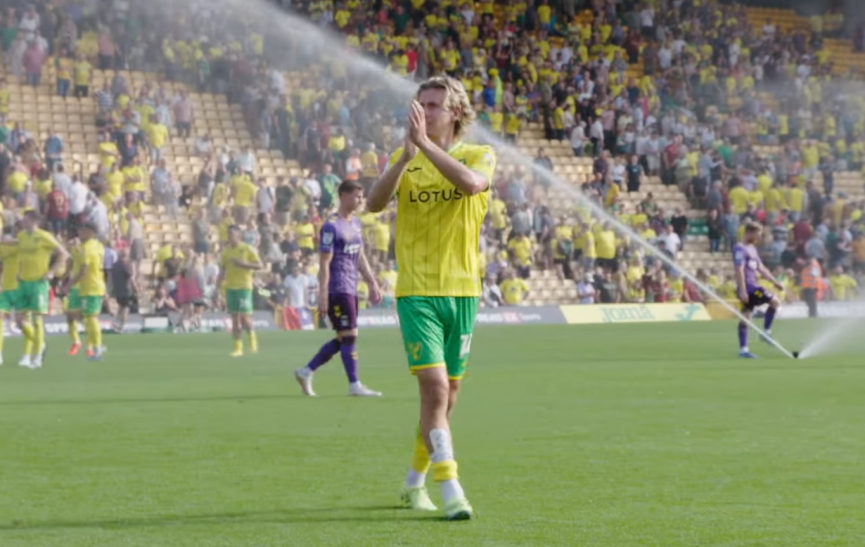 It’s not often it can be said that Todd Cantwell has gone under the radar. That’s not his style.

But he has, or at least his road to redemption has.

It feels like, almost without noticing, we have our old Todd back. The one who clearly loves playing in the yellow and green, is warm and charismatic, and, most importantly, is a bloody good footballer.

Okay, so he’s yet to hit the heights of his purple patch of spring 2020 – pre-penalty keepie-uppies at the Tottenham Hotspur Stadium etc – but the signs are good and now none of us will be surprised if/when he finds those levels again.

The one that races half the length of the pitch, stride for stride with Teemu Pukki, for the most glorious tap-in in the history of football against Man City, or the one that takes aim and scores to give City the lead against Arsenal in front of the Barclay.

The one who felt he had, and did have, the footballing world at his feet, and who, behind closed doors, led us, hand-in-hand with Emi Buendia, back to the land they tell us is promised (but isn’t).

The one who so enraged those 15,000 Tottenham supporters behind that goal with said keepie-uppies before nervelessly thundering his penalty into top bins.

The one who was understandably linked with moves away from the Fine City for tens of millions.

We loved that version of Todd, desperately didn’t want him to depart, but felt his exponential growth as a footballer would make it inevitable.

There was, of course, that wobble at the start of the 2020-21 Championship campaign, when he and Buendia were left out of the starting XI at Bournemouth away because Daniel Farke thought speculation around their possible departures had impacted their ability to concentrate, but that was fairly quickly resolved.

Both Todd and Emi successfully settled any differences they had with the club and went on to become central to that Championship-winning team.

And then, almost from nowhere, it all went a bit wrong.

I have no idea what went on behind the scenes and have no wish to speculate, but what did happen was that an unrecognisable version of Todd emerged – one who appeared unhappy and who, it seems, didn’t want to be in and around Norwich City Football Club.

The inevitable parting of the ways occurred and Bournemouth was chosen as his temporary retreat with a view to it becoming permanent if it worked out for both parties.

Eleven appearances without a goal was the sum of Todd’s stay on the south coast with Scott Parker declining an offer to make the deal permanently for something like £11 million.

All of which concluded in a summer of uncertainty. At least that’s how it appeared on the outside.

Several transfer rumours did the rounds, one of which prompted me to write a piece speculating on the future, or otherwise, of Todd at our football club.

I concluded that the best result for all concerned would be a renewed and rejuvenated player whose head was in the right place and who wanted to return to that happy place of February 2020 while kitted out in yellow and green.

That was the ideal scenario but was also the one that appeared most unlikely.

But, here we are, nearly three months on and there’s a smile back on Todd’s face.

The signs were positive as soon as pre-season began and the positive body language and general chirpiness in the club’s behind-the-scenes videos painted a picture of a young man who was ready to give it another go.

In the piece I wrote on MFW in June, I fell into the cliché trap and used the dreaded ‘it would be like a new signing for Dean Smith’, but as it’s transpired that’s exactly what’s happened.

While Todd hasn’t started every game, he’s clearly in Smith’s plans and has shown levels of hunger and desire far removed from the lost soul who went through the motions last season.

Ultimately, when all boiled down, he just had a stinker of a season – something that lots of young players have to go through – and the important thing is the here and now. And here and now we have a very talented player who’s gradually getting back to his best.

That it’s been a gradual process and has, as a result, occurred under the radar is no bad thing.