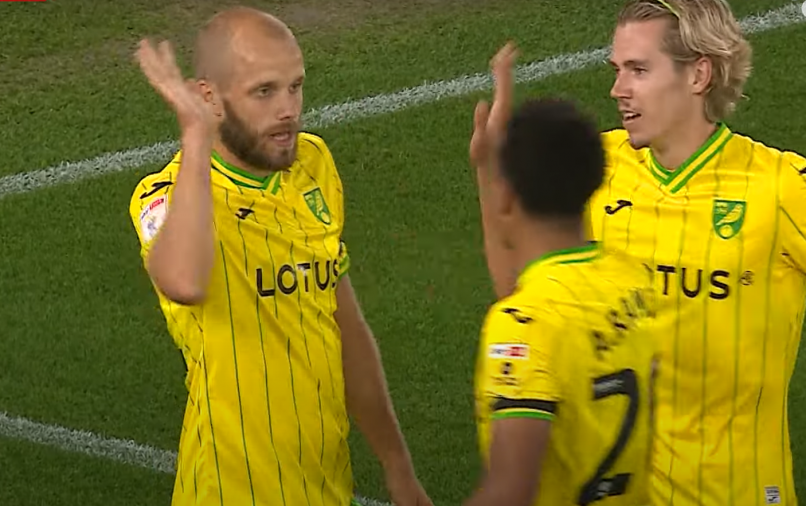 There are many different ways to win a football match; the list is almost endless. Yet Dean Smith’s City keep discovering new ways… usually inadvertently.

Last night it was… a) Race into two-goal lead while playing like the away side, b) Give ball away with alarming frequency and so invite thoroughly decent Bristol City to dominate you, c) Give sloppy goals away, and d) Hang on for dear life.

And in its own way, it was glorious.

The winning habit has indeed returned.

It was a tough old night though. The Robins were good, as we expected them to be, and won the tactical battle.

Nigel Pearson’s risk and reward approach so nearly paid dividends and probably would have done so had we not possessed a record-breaking goalscorer, whose sharpness and desire appear to be back.

Not only did Teemu Pukki take himself another notch higher in the club’s all-time goalscorers’ chart, but he also allayed fears of some, me included, that he’d permanently lost that vital half-a-yard of pace over five that set the great strikers apart from the good ones.

Thirty-two years of age he may be, but the opening half hour last night demonstrated perfectly that he’s still the main man in this division.

And thank god he is.

Without him, that could have ended up being a very tough watch, even tougher than it was. Imagine neither of those chances going on *and* being thoroughly dominated for most of the 96 minutes.

(On second thoughts… don’t imagine that. #NCFC Twitter is grim enough today as it is.)

Of course it’s been a bit of a struggle at times, and, yes, it was hard going last night but six wins from six when you appear to have reached nothing like top gear feels like a decent place to be in. And even if this *is* us in top gear, we’re still winning games of football with comforting regularity.

You get three points for a win regardless of the beauty of the football and the faultlessness of performance.

But it won’t have been lost on Dean Smith and Craig Shakespeare just how difficult his back-four and goalkeeper found it to pass their way out of a well-executed high press.

There were alarming echoes of those ill-fated Premier League campaigns where we tried (and failed) to break the press of teams who reveled in our toing and froing in our own defensive third knowing we’d eventually give the ball, and usually a goal, away.

Bristol City did a similar job on us last night, helped by the fact they were happy to risk flooding those areas with numbers and leave their back three to manage our front three.

Ultimately it was to cost them a 2-0 deficit, but even then they persisted and were eventually rewarded with a late first-half goal.

Minutes 30 to 45 were akin to minutes 45 to 65 against Coventry – painful and best observed through beer goggles or not observed at all – and the goal just before halftime, as deserved as it was, was about as sloppy and half-@rsed as you can get from a defensive angle.

Smith spoke afterwards of his players taking their foot off the throttle because of the two-goal cushion – something they’ll have been reminded of at halftime to such an extent that let’s hope they’ll think twice about repeating it.

It doesn’t take much to get found out at this level. If your level drops to, say, 98% it’s sufficient to hand over the initiative. And we did.

The second half was a little less Alamo and a bit more 50/50 but still lacked cohesion and poise.

When Onel Hernandez and Gabriel Sara joined the fray, while to suggest they added cohesion and poise would be pushing it, they did bring with them some much-needed energy and oomph.

Hernandez also added some of that old-school concept known as width on the left – something the right-footed pairing of Sam Byram and Todd Cantwell were never going to provide – and it helped. That he did so in his own inimitable way also helped ignite a subdued Carrow Road.

Referee David Webb, him of the curious decision-making, also contributed to the raising of the stadium’s temperature.

I was less incensed by his whistledom than some but there did appear to be a foul on Max Aarons in the lead-up to Bristol City’s second goal, and I’m of the understanding that any head injury should necessitate an immediate whistle.

But it wasn’t Mr Webb’s fault that Danil Sinani gave Marcelino Nuñez a hospital pass, or that the Chilean dwelt on the ball at the worst possible time before clipping the heels of Joe Williams.

Even if Semenyo had missed, it would have been a pen.

That we contrived to miss some more-than-presentable chances to restore the two-goal cushion summed up what an odd and chaotic evening it had been, although Webb’s blowing of the whistle as City were about to miss another sitter appeared more an act of spite than duty.

But, all said and done, it was another win. A touch fortunate maybe but one to store away and revisit when we have an afternoon where we have played well but haven’t won (or even drawn).

Let’s not get too sniffy about every win having to be beautiful.