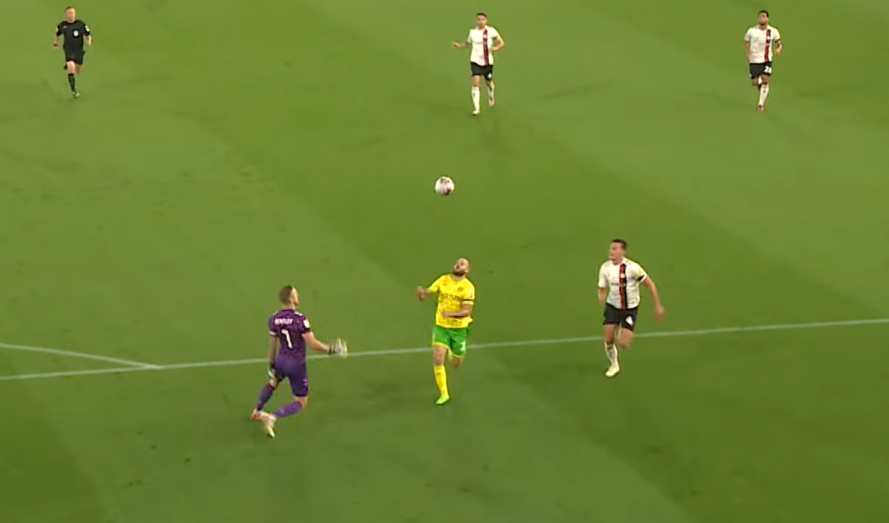 It looked an exciting game under the lights at Carrow Road at first glance but in reality, it was a gritty hard-fought game lacking in quality. This is typical of the Championship and there will be many like these this season.

Despite the Canaries winning six on the bounce there are still causes for concern among Norwich fans.

I will examine the reasons for this angst, investigate the contest’s tactical elements and try to explain why City struggled despite always being a threat going forward.

We will also look at Bristol’s approach out of possession and why this exposed some of our in-possession deficiencies, highlight Norwich’s quality in the offensive transition and, finally, explore the role of the goalkeeper in the build-up.

Bristol City were fantastic out of possession, and I was impressed with the game plan they implemented. They were aggressive, calculated, and clinical in pressing opportunities, looked to specific pressing triggers, and went with aggression to win the ball back. Norwich couldn’t cope.

This exposed City’s lack of possession, and the lack of gameplan in the build-up was evident.

Due to the excellent pressing of the Robins, all too often the ball would end up back with Tim Krul who would hit it long, normally to Josh Sargent, and, as a result of failing to win the aerial duel or the second ball, we would be back under pressure.

Norwich simply lacked the ability to knock it around the back with confidence while under pressure and maintain control of the game.

The high pressing of Bristol can be seen in their average position map above. They committed players forward and looked to play an aggressively high line. This massively affected City’s passing accuracy as can be seen below.

This was firstly due to the impressive pressing schemes from Bristol where their wingbacks were aggressive out of possession and pushing high.

Then once the pass inside came, Bristol City would collapse onto the receiver, committing plenty of players to the first pressing action. They forced numerous turnovers, and both of their goals came from transitions they had forced. This, in turn, exposed the in-possession deficiencies of City’s build-up.

In a previous analysis, I have highlighted the impact of two right-footers on the left side of defence, but another element is carrying a goalkeeper (more on this later), a centre-back and, arguably, a left-back who’s on his unnatural side in possession. Against a good pressing side, this produces a lack of control.

This comes from a lack of technical quality and confidence in a teammate’s ability to receive the ball under pressure and knowing they have the quality to produce the next action required.

There is also a lack of coherent build-up patterns as a result. The entire build-up looks as though the defence lacks understanding of where they should be passing and the required ability to think on the fly.

Bristol City’s approach unsettled Norwich, however committing the number of players forward while producing results for them left space in behind.

It also meant in the transition heavy game like this, when Bristol was unable to get close enough to Norwich players, they had the quality to pick a pass to the excellent off-the-ball mover, Teemu Pukki.

This meant City were a constant threat in the offensive transition. Pukki is one of the best off-the-ball movers in the game, constantly finding himself in space if his teammates were able to find him.

Norwich have an abundance of quality in forward areas for this division so, while Bristol did well to limit this, they had alternative ways to be a threat. This is the first time we properly got to see Dean Smith’s work in the offensive transition as Bristol afforded space. Norwich looked good in this part of the game.

In the possession statistics below, it is evident how Norwich looked to attack in this match.

This is the complete opposite of the sustained attacking Norwich have been doing recently as they adapted to how their opposition looked to defend. They looked to make use of the space provided by Bristol and played quickly. The vast majority of attacks were under 10 seconds and they still managed to produce 2.17 xG.

There is no right way to play football as long as you are effective.

For me, Bristol were tactically excellent, but Norwich under Smith are pragmatic and can find solutions to win football matches.

This is a different proposition to Daniel Farke’s Championship teams who would have an excellent plan A that would dispatch most teams.

This season Norwich will be adaptable and find ways to win. Smith has great squad depth and uses it well to change games.

Role of goalkeeper in the build-up

The role of a keeper has changed dramatically in modern football. They now need to be able to pick out a teammate under pressure due to teams now committing more players forward.

They must be able to play the clipped ball over pressers to wide areas and are expected to be able to control the ball quickly and play hard passes. This is most prevalent against sides like Bristol City who are excellent pressers. Krul struggles with this (as shown below).

These statistics show a goalkeeper who is incapable of the pass I was talking about earlier to relieve pressure in the build-up. The pass map above shows clearly that Krul is unable to play longer passes to wider areas consistently.

This lack of technical quality massively influences Norwich’s ability to beat the high press and, in turn, affects their ability to control a game.

If City can add this ability to their arsenal, quality teams like Bristol, who caused problems defensively, would be blunted as they are unable to get close to the ball. Currently, Krul makes poor decisions and puts teammates under pressure to City’s detriment.

The impressive Bristol City suffocated Norwich. This is the most open we have looked all season and it’s becoming a pattern that teams who perform the best against us are the sides who look to press aggressively and expose our in-possession weakness.

Norwich however, as they have frequently, came up with a solution to win the game. The transition threat through Pukki was evident and the first set-piece goal under set-piece coach, Allan Russel! This showed City’s pragmatism and the fact their transition is now more effective under Smith.

So, an excellent and hard-fought three points with elements to improve on, and now onto another tricky customer on Saturday in West Brom.

The Baggies are a side whose performances have been good but have been unable to pick up the points they deserved. It’s an important game for under-threat Steve Bruce.

Thanks for reading as ever. If you enjoy my analysis, then please follow me on Twitter @rbecks17