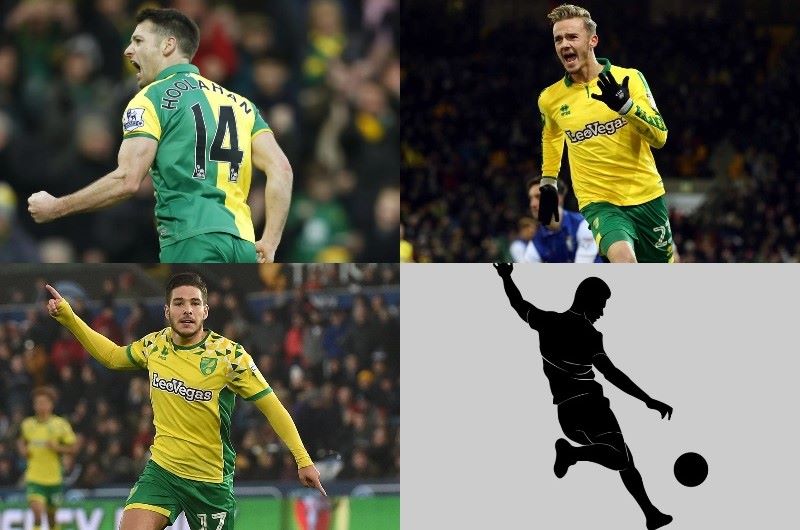 While watching a laborious City side try and break down the massed ranks of the West Brom defence, something was missing.

I yearned for someone to conjure up a little bit of magic; someone to do something unexpected but brilliant; someone to take the game by the scruff off the neck and have the confidence in their own ability to demand the ball high up the pitch and shoot or find a killer pass.

It didn’t happen and I realised my brain had been trained to look for that player because of a near unbroken succession of just such gifted talents who occupied that advanced midfield role.

My subconscious was willing the ball to be played to the guy who had the ability to alter the course of the match when it looked like it was heading only one way. Regardless of the subtleties of formation and tactics, for well over a decade we had just such an operator.

We are crying out for one now.

Ever since Paul Lambert moved Wes Hoolahan in from the cold of an unsuited, Roeder-inspired spell on the left-wing (or bench) and to the very tip of a diamond, we have had our own crown-prince of creativity.

From that moment in mid-September of 2009 through to the emergence of James Maddison for one memorable season and onto Emi Buendia, we have had someone that could win a game from nowhere by scoring or assisting when all else looked lost.

The fact that these players were all acquired for relatively small sums and went on to become international standard footballers made their appeal all the stronger, as did their clear passion for the football club and a very clear sense of giving everything they had during every 90 minutes.

For 12 consecutive seasons and the best part of 500 games, we had our own ‘cheat code’ that gave us hope and who entertained us while doing it.

So who is the heir apparent?

I believe the current squad has four potential heirs to that throne. The one guy I think we all hoped it would be but is firmly in the ‘case unproven’ category is Todd Cantwell.

A little story… I was fortunate enough to be having lunch with the then CEO of Brentford just after they signed Sergi Canos from City. While he couldn’t believe that they had been allowed to sign him for the fee they did, the reason given was that the club didn’t want to block the pathway of a young player they were convinced would quite soon become a Premier League-level player. That player was Todd.

On his day, and there have been plenty of them, he has that languid style and movement that makes the game look easy, with an ability to score as well as assist. We haven’t had many of those days since Emi left – and they were big boots to fill – but I think many of us expected him to step up.

Whatever happened in the early part of last season I’m not sure we’ll ever know and, frankly, it’s not important, but a City side with a confident Todd, feeling loved and part of it is a much better watch than one without it.

But with the jury out, who else does that leave us?

Kieran Dowell has flattered to deceive in his time with the club. His performance away at Nottingham Forest during lockdown when Emi was out made us think that perhaps, just perhaps, the ex-Everton man could live up to his early promise.

I like Dowell but he is frustrating to watch as he drifts in and out of games too readily to cement a starting place, and is perhaps more of a ‘number 10’ than our current system allows. Often the idea of Kieran is better than Kieran himself.

He can spot a pass and his finishing can be good too but at the moment he has it all to do to become a regular, let alone City royalty.

In the same bucket, I would add Aaron Ramsey. His recent performances hint at potential and, clearly, the current management team believes he can add real creativity to the front line, but for me, he is too in and out of games.

While that can be expected given his age, I suspect that inconsistency, coupled with the fact that Ramsey isn’t our player, means he’ll not be what we are looking for in that role this season.

So, to a more recent acquisition.

When Marcelino Nunez signed I am sure that the management team’s thoughts turned to a midfield triumvirate of Isaac Hayden holding, Gabrielle Sara providing the box-to-box engine room and the Chilean providing the creative spark.

So far, given the injuries to Hayden and Liam Gibbs, we have seen Nunez playing deeper, often next to Kenny McLean (who, let’s not forget, replaced the aforementioned Maddison as Aberdeen’s central attacking force) where we have seen tantalising glimpses of the Chilean’s ability to make things happen.

The joy that he plays with, his willingness to try something out of the ordinary, to shoot when necessary and, perhaps above all else, his blossoming connection with the City fans, make him, in the eyes of many observers, the most likely to succeed the line of Wes, Madders and Emi.

West Brom will not be the last team to employ two banks of four or five players and ask us to find a way through.

Perhaps there will be a tactical switch or someone will emerge from outside this group of players, but until then, Carrow Road has a ‘situation vacant’ sign up, and there is a chance for someone to join a line of very special City players.