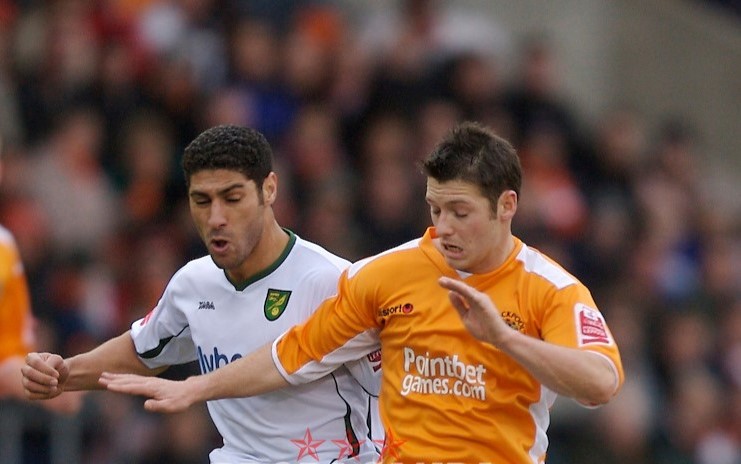 We come across many familiar faces when we (almost inevitably) return to the Championship but this being football, there are always a few new(ish) faces and, as such, offers an opportunity for a brief return to our ‘We Meet Again’ series.

So, if you’re one who enjoys footballing nostalgia, join us on a trip down Memory Lane…

Next up it’s the classic summer away trip. Beyond the Tower and Pleasure Beach, lies Bloomfield Road, home to the Tangerines – Blackpool FC.

Blackpool is more than a tourist hotspot; the team has pedigree with a famous FA Cup win (the Matthews final) and more recently a stint in the Premier League.

Canary fans certainly enjoy their trip to the seaside with seven wins in 15 visits to Bloomfield. This included a 3-1 on our last visit back in September 2014 – a win that was followed later by a 4-0 victory at Carrow Road as we marched to the playoffs and then promotion. Blackpool disappeared in the other direction.

Player connections? The one and only Wes Hoolahan was signed from Blackpool in 2007 with City keeper Matthew Gilks being part of the deal. A decade of service, 352 games, 54 goals, promotions, relegations hero-worshipped, and falling outs. The Irish Messi is a fully-fledged hall of famer. Not bad for £250 grand!

But the player connections don’t stop there.

Did you know, for example, Adrian Forbes, David Fox, and Michael Theoklitos (yes, him) all played for Blackpool?

While sticking with obscure names, Gaetano Giallanza scored twice in a 2000 League Cup clash that we won 8-3 on aggregate.

On a more topical note, lining up against the Canaries this weekend will be Norwich-born Sonny Carey, who was in City’s academy between 2010 and 2017 before arriving at Bloomfield Road via Wroxham and King’s Lynn.

And it’s not just players.

Nigel Worthington started his managerial career at Blackpool before moving south to eventually breathe life into a struggling Canary outfit.

And did you know that we have played and beat Blackpool in a domestic cup semi-final?

Probably not as the 1961-62 League Cup had an even lower profile than today’s tournament. However, it is a trophy in the Carrow Road cabinet and the semi-final win over the Tangerines (4-3 on aggregate) was impressive as they were then in the top flight – a league higher than City..

It’s unusual in this ‘we meet again’ series but we have never played Blackpool in the top-flight, be it Premier League or Division 1.

Every league encounter has been in the second tier with Norwich coming out on the head-to-heads with 14 wins to Blackpool’s 11. It was a slow start though with four losses and a draw in the first five meetings back in the 1930s.

The biggest league scoreline was a 5-1 City win on 25th March 1972 – a crucial win on the run-in to that first ever Division Two promotion. It helped arrest a wobble. Before that game we had won just one in eight, but after beating Blackpool we had just one defeat in nine.

There are no wobbles at the moment for City despite the question marks on performance levels, however a win on Saturday followed by a run of one in nine would go down very well thank you.