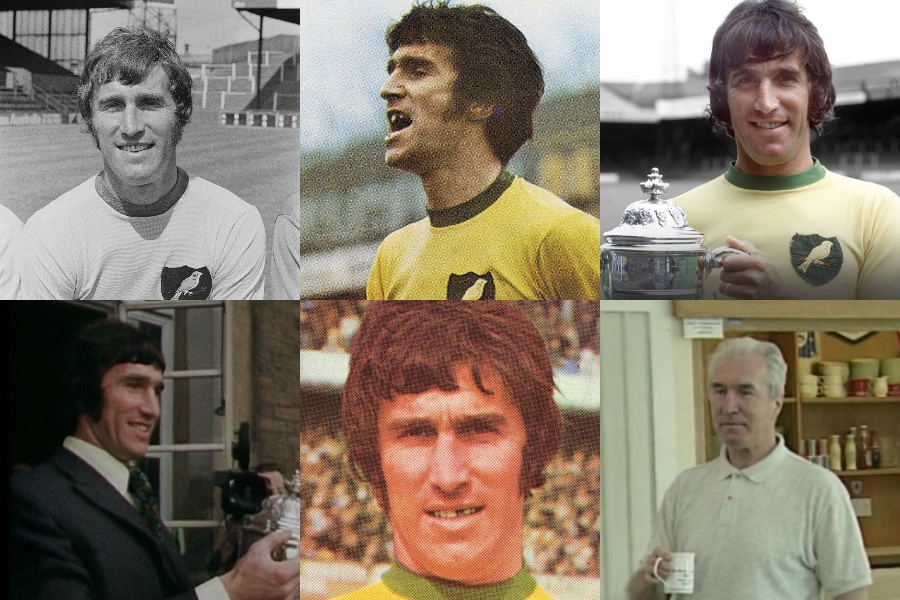 Football elicits strong emotions and forges memories that can last a lifetime. Whether it’s from a single moment of individual brilliance or a distinguished career representing the football club, certain players live long in the memory.

One such man was City legend and Hall of Famer, Duncan Forbes.

In this two-parter, and as part of the launch of Duncan’s Club – a Norwich City Community Sports Foundation project (more info at the foot of this piece) – Ed Couzens-Lake, reflects on the player who many City fans will always think of as ‘our Captain’.

I’ll pass you over to our Ed.

The devil is always in the detail.

Take, for example, a tiny and almost apologetic footnote at the bottom of one of the inside pages of the Daily Mirror dated Monday, January 8th, 1968.

It recalled one of that weekend’s FA Cup second-round matches, a clash that might well have captured the imagination of some of the more excitable parts of Essex but, as far as the wider world would have been concerned, would have come and gone as swiftly and forgettably as the newspaper your post-match fish and chips had been wrapped in.

The sort of match that, for all the ‘magic’ of the FA Cup, would have slipped past David Coleman on Grandstand as it rattled its way across the BBC’s iconic Teleprinter screen.

There and gone again.

Unless, of course, you were Harry Miller, the sports reporter who the Daily Mirror had sent along to the game.

His brief would have been simple. Score, scorers, quote and brief comment about the match.

It’s the latter of those four requirements that stands out. For, according to Miller;

Duncan Forbes. The man hewed out of finest Edinburgh granite. Doing what he did.

‘Outstanding’ came as standard to Big Duncan. It was his default setting. And yes, whilst that FA Cup second-round game in front of a few thousand frozen and desperate souls at New Writtle Street wasn’t ever going to be something worth writing home about (unless your name was Harry Miller), as far as Duncan Forbes would have been concerned, it might as well have been Scotland versus England in front of 120’000 tartan clad warriors at Hampden Park with his brief being to keep Bobby Charlton quiet.

Except, in this case, it had been Derek Trevis and Bill Cassidy who Duncan had ‘kept quiet’.

He’d become something of a fixture in the Colchester team by then, signing for them nearly seven years earlier after one of the club’s scouts had made then manager Benny Fenton aware of a young defender at Scottish non-league side Musselburgh Athletic who was better than most at stopping opposing centre-forwards from what they were supposed to be doing.

Quite an achievement for a teenager when you consider the sort of men that Duncan, 19, would have been marking.

A ‘Heilen Coo’ in football boots. Gnarly men who led with their elbows.

They’d have soon known who Duncan Forbes was. The one who helped them up off the mud and grit he’d sent them crashing down onto with a smile on his face as he did so.

Six foot two, eyes of blue, Duncan Forbes is after you. It was his trademark greeting for the opposition, a trait that led to the memorable quote from the man at The Times, who drily noted that “Forbes got his customary booking; the referee ought to take his name in the changing room rather than on the pitch thus saving time.”

Fenton had been brought up on the finer things in football at West Ham. Yet, having spent three years as a player with Colchester, he knew that you didn’t so much need a team of technicians in England’s lower leagues as you did one that was comprised of bulldozers.

He arrived at Layer Road in September 1961, a late but, nonetheless, very welcome addition to a squad that had just commenced its first-ever season in Division Four, having suffered relegation at the end of the previous campaign.

That sudden drop into football’s basement came as something of a shock to both the club and its supporters as they had previously enjoyed eleven consecutive seasons in the old Division Three South/Division Three, including, in the 1956/57* season, one that was good enough to see them finish third in the league, missing out on promotion to Division Two by just two points.

Not unreasonably, therefore, Fenton was expected to not only get them back up again but very much onwards and upwards, with promotion to Division Two for the first time in the club’s history the eventual target. First of all, however, he had to get the U’s out of Division Four and, in order to do that, he needed a touch of defensive iron added to the mix.

Duncan’s time at the club coincided with a remarkable run of ups and downs as Colchester swiftly became what we now refer to as a ‘yo yo club’, experiencing two promotions and two relegations during his time in Essex.

Of those, the first promotion was an impressive one that saw Colchester go straight back up again at the end of the 1961/62 season as runners-up, thanks in no small part to a very impressive home records that saw them win 17 and draw four of the games they played at Layer Road scoring, in the process, 78 goals out of a season total of 104, with the outstanding performance being a 9-1 win over Bradford City on December 30th.

Thus Duncan had, unquestionably, joined a team on the up and one that had no problems in scoring goals. Where they were having difficulties was at the other end of the pitch, something that was duly noted by Jack Welling of the Sunday People who, during his report on the game, was still concerned enough to write,

‘If Colchester had a weakness, it was defensive. In Bradford’s only serious spell, covering fifteen minutes of the first half, wing halves Trevor Harris and Ronnie Hunt were frequently left flat footed’.

How bad must things be at the back if you win a game 9-1 but the report of the game still points out some glaring defensive deficiencies in your own ranks?

Duncan hadn’t been selected for that match but he soon settled into the side and went on to make 270 league games for the U’s before signing for Norwich, then managed by Lol Morgan for just £10,000 in September 1968.

*Norwich finished that season bottom of Division Three (South) and had to go through the ignominy of having to apply for re-election to the football league. 46 games played, just eight won, and 94 goals conceded it was, and remains, arguably, the worse season in the club’s history.