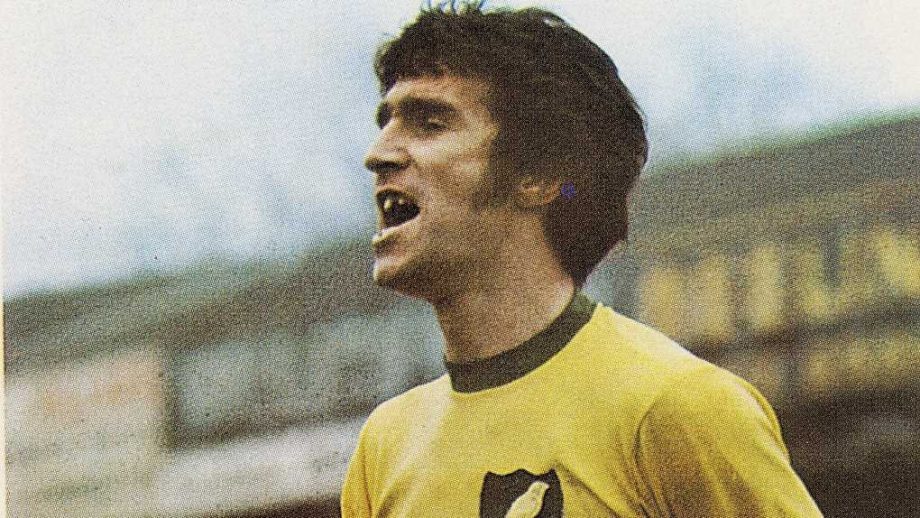 Duncan’s league debut for Norwich was in the 3-1 win over Fulham at Craven Cottage on October 12th 1968, his place in the side and the number five shirt that he went onto wear being relinquished by Laurie Brown who, after nearly 100 league appearances for Norwich saw the writing on the yellow and green wall, taking the hint and joining Bradford Park Avenue soon afterwards as player manager.

Duncan was, by now, 27. But, as the saying goes: good things come to those that wait. And his time had most certainly come. He made 23 league and cup appearances for Norwich that season, scoring, in the process, his first goal for the club in a 2-1 defeat at Aston Villa, wearing, for that game, the number 11 shirt, with Ken Mallender wearing five on the day.

By the time the 1969/70 season began, however, that number five was Duncan’s to keep. He was, along with Dave Stringer, an ever-present in Norwich’s league campaign, 42 appearances out of 42 and two goals scored (against Birmingham City and QPR).

Stringer and Forbes. The beginning.

Norwich were, by now, managed by Ron Saunders. Lol Morgan’s tenure had come to an end at the end of the 1968/69 season with Saunders brought in for one reason and one reason alone: promotion to Division One for the first time in the club’s history.

He was given three seasons to transform a side that had ended the 1968/69 season in 13th position, 23 points behind title winners Derby County – and only ten points clear of the relegation places – from the absolute epitome of mid-table mediocrity to the pinnacle of the English game.

And he wasn’t going to mess about.

Myriad stories abound about the talismanic Ron Saunders and the seismic impact his introduction to Sleepy Hollow, aka Norwich City, had upon both the club as well as some of his newly inherited players when he accepted the job as the Canaries’ new manager in the summer of 1969.

A particular favourite of mine relates to an interview he gave to Anglia TV’s Gerry Harrison who’d asked Ron about the playing squad that he’d inherited from Morgan. It was an honest and extremely forthright answer that came with a devastating punch line.

Both Harrison and the viewers were left in no doubt as to what happened next as a steely-eyed Saunders followed up the question by adding;

“I sorted them out”.

Saunders knew that, as far as the dressing room and training centre at Trowse was concerned, if he wasn’t “sorting them out” then Duncan would certainly be doing just that with any perceived fancy-dans, ne’er do wells or slackers.

Saunders and Forbes, his newly appointed captain and leader of men, were a footballing match that was made in heaven

Norwich’s push for promotion came during the 1971/72 season and, 15 games in, things were looking good. The Canaries were top, a position they consolidated after a 2-1 win over Cardiff City on October 30th 1971, a game that was marred by an injury to Forbes who not only had to go off but went on to miss the club’s next 15 league games – an absence that Saunders, usually reticent to favour any one particular player over the rest of his team, later admitted had been a real concern.

Looking back at that injury towards the end of the season, a muddy and sweaty Forbes, clad in a plain green sweatshirt talked to Gerry Harrison about the injury, admitting that, at one point, he’d even wondered if he would ever play again.

Then, asked by Harrison how he saw his role at the club when he was playing and, thankfully for all, he returned in a 1-1 draw against Sunderland on March 11th, especially with regard to his position as captain, one he’d immediately retained from Stringer upon his return to the side.

“The main thing is, you’ve got to shout at the lads, encourage them you know, keep them going. I’ve got quite a loud voice like, this helps me tremendously”.

The voice that a Dundee player, part of a team that happened to be staying at the same Portugal hotel as the Canaries had put his head out of the window after two days’ proximity with Forbes, begging him to “… keep your voice down to a roar”.

Norwich’s push for the Division Two title and promotion to the top flight famously went to the wire with the three points secured at Orient and Watford at the end of that campaign famously sealing both. Yet, amidst all of the excitement and muddy-eyed nostalgia that surrounds those matches to this day, few remember the Canaries’ last home game of that season – a 1-0 win over Swindon Town, played in front of 31,634, that came courtesy of a goal from Duncan Forbes.

The lad from Musselburgh was, at the age of 31, going to play in the First Division.

Few at the club deserved that opportunity and accolade more.

As far as that inaugural season in the First Division was concerned, there was never any doubt that Duncan would be leading the way. He may have been 31 and about to play at the highest level for the first time as a relative veteran of the game, but Saunders had no doubts whatsoever that he would thrive amongst the elite.

And he did. Duncan made 40 League and Cup starts during the 1972/73 season, his partnership with Dave Stringer as resolute as ever with, when needed, locally born Steve Govier stepping in for either one of them.

Who says you can’t go into a top-flight season with only three centre-halves, one of them a 20-year-old?

Because that’s what Norwich did during that historic season, defying the odds by avoiding the relegation that everyone had predicted would be their fate come May.

It was led by a man who redefined what it was to be a leader both on and off the pitch, and whose reassuring presence in the side at places like Maine Road, Elland Road, White Hart Lane and Anfield always led to City fans believing that, despite what, at times, looked like insurmountable odds, we always had a fighting chance.

Duncan Forbes would have neither settled for nor expected anything else.

A man who will forever be our Captain.

In later life, Duncan faced the challenge of living with Alzheimer’s disease, the most common cause of dementia.

In his memory and honour, the Community Sports Foundation has launched Duncan’s Club – a support programme for people living with dementia and their carers.

While there is currently no ‘cure’, there has been significant progress in understanding how different diseases cause damage to the brain and produce dementia, with many more research studies and clinical trials taking place and some promising advances.

It is known that leading a healthy lifestyle, including regular exercise, and maintaining social contacts, decreases the chances of developing chronic conditions.

Based at The Nest in Horsford, Duncan’s Club provides a weekly session in which participants can socialise, reminisce and engage in mental and mild physical stimulation, within a secure and relaxed environment.

The project is delivered by CSF staff and a small dedicated group of volunteers, who use a mixture of visual and audio prompts, to take participants on a nostalgic trip down memory lane.

The opportunity to share and trigger memories is an immensely powerful tool for those living with dementia, and the loved ones who support them.

More information on the programme is available on the CSF website