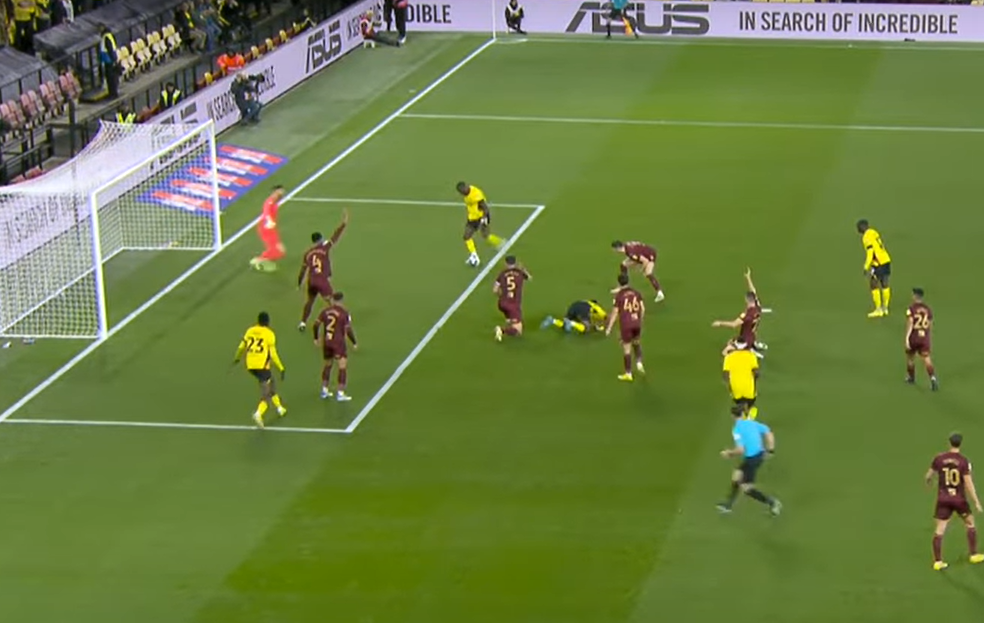 It was almost a game of two halves. Almost.

But almost was not enough. And the first was so poor, it would have been nigh on impossible for the second to be as bad.

To make it doubly disappointing, Watford are not the Championship galacticos Mick McCarthy would have us believe. They’re an okay side that contains a couple of outstanding attacking players.

But even by trundling along in second and third gears, they could have comfortably gone in with a 4-0 halftime lead. That’s how poor it was.

It was the usual … a performance lacking in energy, tempo, and precision, and one riddled with misplaced passes, missed tackles, and defensive uncertainty.

For good measure, there was also that thing that always happens when we play Watford: we were bullied. The one thing we all agreed mustn’t happen, happened.

But no one needed a UEFA Pro Licence to see the problem when the teamsheets were released.

While Dean Smith’s hands are partly tied due to injuries etc, a midfield three of Marcelino Nuñez, Liam Gibbs, and Kenny McLean, with support from Kieran Dowell, was never going to be physically strong and combative enough to control a game against a team known to be both of those things.

It was too early to start Isaac Hayden, of course, but after Gabriel Sara’s first goal and tidy performance last week, it felt odd that he didn’t get a start, especially when Dowell was afforded one.

For all the ex-Everton man’s quality on the ball, he’s not the man for the job when you need someone with mobility and who can mix it.

I’m sure Smith’s reasons were well thought through and logical to him – hindsight is wonderful etc – but that midfield looked ill-equipped for the job even before a ball was kicked.

That things improved when Hayden and Sara came on tends to suggest it was a mistake but all of the first-half travails were exacerbated by carelessness in possession.

The only way a lack of energy and oomph can be mitigated is by having and keeping the ball, but right now, for a team that Smith wants to be possession-based, we’re not very good at it. Possession is coughed up very cheaply amid the lack of fluidity.

I’ll not delve too deeply into the two goals conceded as errors were plentiful and obvious, but a common denominator for both, and many other first-half problems, was Max Aarons being the topping on Ismaïla Sarr’s toast.

It’s not the first time Max has had a tough time at Vicarage Road but, generally, what was once an upward curve is for now a plateau. That he was eventually hooked told its own story.

But while the obvious questions mark over the starting XI remain, one change made by Smith that was vindicated was Angus Gunn for Tim Krul.

Aside from the ironic penalty save (given that Krul is regarded as a penalty king), it was a performance of composure and calmness from Angus – good enough to see him retain the jersey.

Another obvious plus was the sight of Hayden getting some game time. For the 20 minutes or so when he was fresh and before everything started to tighten up, he looked like the player we desperately want him to be.

We now just have to cross everything and hope that knee doesn’t react badly to 45 minutes of high-tempo Championship football.

What he probably didn’t need was a 40-yard foot race with a fresh João Pedro but that’s what he got. It was no surprise it took him five minutes and a visit from the physio to get up.

But a fit Hayden will hopefully make a positive difference to that midfield and its ability to withstand the physical stuff while offering a more solid base from which to go forward.

To ask him to impact positively the staccato passing may be pushing it a bit, but I’m a dreamer.

A left-footed left-back will also be a blessing when either Dimi Giannoulis or Sam McCallum are fit to resume. It becomes more obvious by the game that having no left-footers in that back line badly hinders the collective ability to work that ball out of the defensive third.

For me, it’s the one area where it’s hard to get away with a ‘wrong-footed’ player. Even a right-footed left-winger has the option of cutting inside (just ask Hucks) but not so a left-back.

But there are things wrong that won’t be just fixed by the inclusion of Hayden and Giannoulis, like the lack of penetration, the scarcity of shots on goal – just two last night – and the painfully slow, deliberate build-up that invariably ends with a loose pass.

The nine-game unbeaten run was good while it lasted but that’s gone now and we’ve collected just a point from the last nine available.

“At least we’re winning even if we’re not playing well”, is no longer valid mitigation, and there are signs of struggle when faced with promotion-chasing opposition.

That Smith was angry at half-time was more than justified but his citing the lack of aggression when he picked a midfield that by its very nature lacked aggression and bite is on him. So too the seemingly muddled plan in terms of how to progress the ball through the thirds.

Last night, aside from that 20-minute spell early in the second half, we looked nothing more than an ordinary Championship side. And with the players available to Smith, that doesn’t feel right.

We have, of course, no divine right to win games at this level – every point has to be hard-earned – but right now the collective is less than the sum of the component parts. And we’re not very good to watch.

It’s a big night on Tuesday. For the team and for Dean Smith.