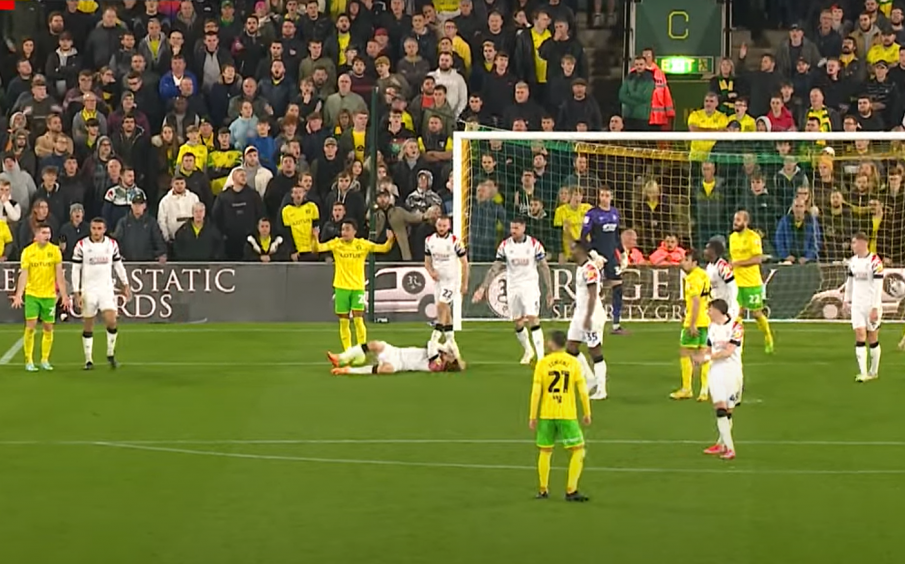 Only a week or so ago, City were nine games unbeaten. Whilst the performances were not totally convincing, City were widely expected to kick on from there.

Now, coming into what looked like the easiest game of a tough October they were without a win in five.

Dean Smith drew some criticism for his team selection against Watford, so it was a surprise to see Kieran Dowell retained in the starting line-up, but the merit of his decision was never tested as the former Evertonian was taken ill in the warm-up and replaced by Danel Sinani.

The game began slowly but an early long ball saw both Teemu Pukki and Josh Sargent rushing to close down Horveth in the Luton goal.  His sliced clearance was evidence of why he had been singled out for such attention.

City were looking comfortable, but not threatening. The defensive line looked more natural with the addition of Ben Gibson and Kenny McLean on the left and generally found it easier to move the ball out from the back.

Luton were largely dropping off, content to concede possession in order to stifle the City attacks.

City were moving the ball well at times with some nice one-touch moves yet every time they got near the Luton box, they ran out of steam.

Luton were not afraid to put some robust challenges in, encouraged by Oliver Langford’s reticence to brandish his card collection.  Aarons was clattered by Doughty and then Sargent was flattened from behind by Oneydinma.  The league’s joint top scorer fell awkwardly and for the remainder of the half struggled, his right knee seemingly the issue.

Luton offered little going forward.  Carlton Morris brushed Liam Gibbs aside but his ball across the area met no one.  At the other end, a loose ball fell to Sargent whose swiveling snapshot was straight at the keeper but amounted to City’s best effort of the half.

Towards the end of the half, City moved forward with conviction, yet again despite lots of touches in and around the area, they failed to mount a threat on the Luton goal.

Then City broke down the right. Sinani received the ball in a promising position on the right but elected to recycle the ball back inside rather than cross into the box.

The half ended with City breaking well out of defence, only to break down after a woeful ball from McLean – spoiling what until then had been a decent game for the Scot.

There was no surprise after halftime when Todd Cantwell replaced the injured Sargent. No surprise, but concern that shot-shy City were now without their biggest goal threat.

Cantwell was straight into the action, a neat touch playing Aaron Ramsey into the box. Gibbs crossed but Sinani put his shot well wide.

Cantwell was at it again four minutes later, putting Ramsey away again but the loanee’s ball to Pukki was just too heavy. Then McLean, Ramsey and Cantwell combined again but Pukki was unable to retain the final ball.

Up to this point, the City performance was looking to be on the up.

On 52 minutes, Cantwell received the ball in the centre circle. He passed it infield but well after the ball had gone, and right in front of referee Langford he was floored by a forearm across the upper body.  Bizarrely City did not even win a free kick.

City were getting closer. Neat interplay on the edge of the box between Gabriel Sara and Ramsey led to Ramsey shooting just over the bar.  City then broke forward with pace leading to Max Aarons getting wide and finally whipping in a cross, but there was no one to take advantage of it.

As Cameron Jerome warmed up, my inner monologue wondered if Carlton Morris was to be withdrawn, thus disproving the Along Came Norwich predictions of him scoring.

City moved forward but lost possession. Gibson took a heavy touch and the ball came to the former City FA youth cup winner. His twists and tricks bought him half a yard over Grant Hanley and he neatly curled the ball past a helpless Angus Gunn.

City came close to striking straight back. A Sara shot took a slight deflection and bounced off the upright and out for a corner.  City moved the big guns up and as the ball came in, from nowhere referee Langford brandished a red card.

After a few minutes, it became clear that it was Mclean who was the recipient.

Replays showed that he had raised an arm, but there looked to be minimal contact with Doughty, who seemed to make the most of it.  To my eyes, this was less deserving of punishment than the earlier incident with Cantwell which Langford ignored.

Smith made three changes. Dimi Giannoulis, Onel Hernandez and Marcelino Nunez on in place of Gibbs, Sinani, and Ramsey.

Luton finally received a yellow card, for taking the ball away following a free kick, shortly followed by Cantwell for protesting too much after another foul on Aarons.

On the sidelines, Smith was incandescent – I’m not sure if he actually received a card for his protests. But at a time when what City needed was a calm head, his protestations did little to calm the players.

For the remainder of the game, City were both hapless and hopeless. Nunez and Cantwell barely managed to retain the ball.

City came closest when Giannoulis played Pukki in. The Finn turned inside but he pulled his shot across the face of the goal.

Despite eight minutes of added time, City never looked like scoring. The late introduction of Isaac Hayden hardly increased the probability of an equalizer.

Boos rang out at the final whistle from those still remaining within Carrow Road, and with good reason.

City have a lengthening injury list, which will do little to ease Smith’s selection problems. However, his team selections seem to lack consistency, both in personnel and formation.

City never looked like unpicking the Luton defence, even with 11 on the pitch. They are attempting to play possession football, yet the players are spread far and wide across the pitch meaning the passes between them are long and risky.

I get it that the idea is to spread the play and move the ball forward quickly, but the result is the opposite.

The opposition have time to move to the destination of the ball and contest it by the time it gets there.  The best City moves came when the play was much more compact and quick one-touch moves got through the Luton lines.

More worryingly though, was the complete disintegration of the team following the sending-off.

There was no discipline, no method, no structure, and apparently no leadership. City were a shambles.

Firstly, Smith will have to do a roll call of players fit to play. Then somehow he has to fashion a cohesive, effective starting 11 from those.

Given his failure to do so up to now with, left-back aside, an almost full squad, you cannot help but feel fearful for the result.