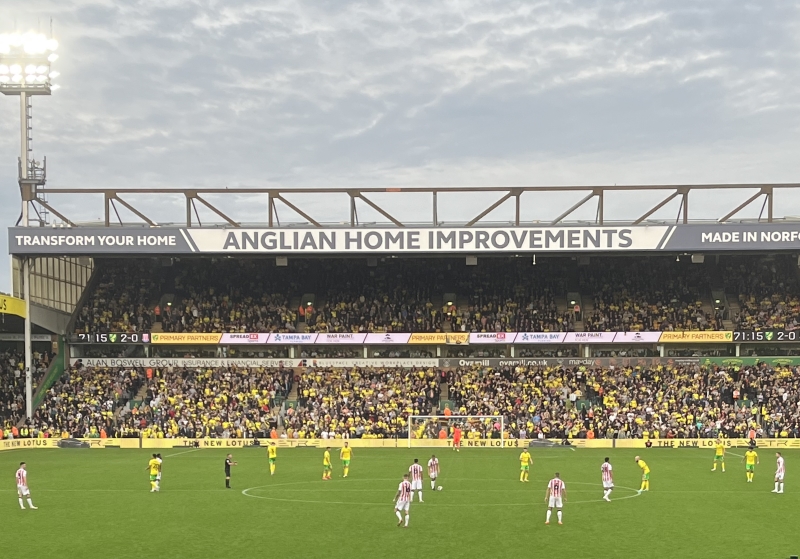 For 15 minutes it was pretty good.

In that respect, it felt like we’d been transported back to the heady days of the nine-game unbeaten run. A win but an underwhelming win. The type to which we’ve become accustomed.

But so poor has been the run we’ve been on, it was just a relief to get three points on the board. For all the turmoil around the future of the head coach and the idiotic comments of a loose-tongued finance manager, the one thing that can’t happen is we allow clear water between us and the top six.

If nothing else, yesterday’s win arrested (for now) that particular slide.

As much as I despair at the thought of having to endure another minute, let alone another season, in the Premier League, the recent release of the audited accounts makes abundantly clear the consequences of us not bouncing back to that horrible place.

Loans worth £66 million have been leveraged again future parachute payments and transfer income, rendering those sums, when finally received, unusable as we’re already benefiting from them.

And then there are of course the obligatory player sales needed to balance the books in our curiously titled self-funding model – a prospect made doubly uncomfortable when you look around the squad and ask yourself, who in there is worth a sum big enough to fill a financial black hole?

So, please forgive me for not hopping aboard the ‘defeat is a price worth paying if it means the end of Dean Smith’ train because for the reasons above we just cannot afford to lose too many more games of football this season.

Some of those bigger-pictures fears may of course be allayed if the financial influence of Team Attanasio grows over the next nine months but while the club remains in the hands of Delia and Michael then, to use a technical term, we could be really stuffed.

But, returning to football, in terms of artistic impression, yesterday’s first half barely registered.

Rather than bursting out of the blocks and making the flying, high-tempo start I would have expected the head coach to demand, it was lethargic and disjointed – the usual.

As if weighed down by expectation and paralysed by the fear of making a mistake, it was staid yet still error-ridden. And lacking in spark and vigour.

There were one of two moments of quality – there always will be in a squad that is not without it – but when you can clearly recall those few moments, then you know it’s been a tough watch.

For the record, into that category fell a lovely, slaloming run from Sam McCallum (which was finished off with a slightly over-hit pass) – a sign of potentially good things to come from someone who shows promise while clearly not yet match fit.

The other moment of quality was of course the goal – the rarity of a nicely-weighted through-ball to Teemu Pukki from Liam Gibbs, after some good work to initially win possession, and then some nifty Pukki footwork before rifling a shot that Josef Bursik could only parry.

Unfortunately, the goal did little to reinvigorate City and made no discernable difference to the mood inside Carrow Road. Stoke continued to be the better side, albeit were badly hindered by a lack of quality in the final third.

For the opening 20 minutes of the second half it was more of the same. Carrow Road groaned, fidgeted, and sighed but while there was a lead, the uneasy peace held.

Stoke continued to toil without end product; Angus stood firm, and then Marcelino Núñez and Todd Cantwell entered the fray, joining Gabriel Sara who had been brought on to replace a very out-of-sorts Kieran Dowell.

And for those 15 minutes, the shackles were removed. Free of too many defensive responsibilities, Núñez looked happier and more dangerous, and Todd chased and harried and put in the hard yards.

The bare minimum you should expect of your players is effort and desire unconfined but that Cantwell, in simply offering both of those things, stood out like a sore thumb was a sorry indictment of all that had gone before.

Todd can – as we know – also pick a pass, as demonstrated perfectly late on with a lovely pass to Jordan Hugill that ended with Bursik making a good save. We badly need this version of Todd, week in, week out.

But before then the game had been wrapped up with goals two and three – number two a flowing team move reminiscent of 2020-21, and three another nice move that ended with a Gabriel Sara tapping in from Gabriel Sara range.

For 15 minutes it was fun. Conclusive proof that the type of football that Dean Smith purports to want from his team can be exciting to watch.

But let’s not pretend everything is suddenly rosy, and as if to remind us, Stoke’s goal was the sloppiest of the sloppy and followed not long after Angus had made a fine double save.

Every win is to be enjoyed – they’re hard-earned in the Championship – but that 75 minutes of the 90 were stodginess personified should not be glossed over.

Only if we can follow this up with another win and produce, dare to dream, a good performance against QPR can we conclude that Dean Smith’s tenure will continue beyond the World Cup break.

Yesterday at least confirmed to us all that we do still have some attacking quality in this group, but there was little to suggest this management team has finally stumbled upon the elusive formula.

But it was a win, and we’ve not had many of those lately, so I’ll shush for now.