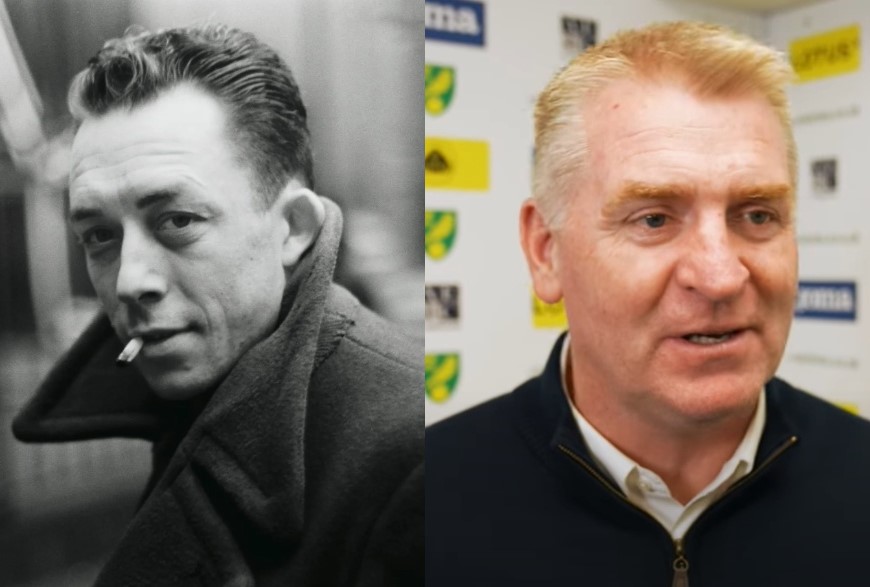 They’ve always had a way with words, have the French. Be it Voltaire, Baudelaire. Rimbaud or my good friends Maxim and Bénédicte when I worked with Publicorp on the Rue Rosenwald in Paris, somebody has a poignant expression for seemingly everything.

I’ve never known who was responsible for originating one of my long-time favourites, so I thought I’d have a quick Google to find out.

Plus ca change, plus c’est la meme chose was coined by one Jean-Baptiste Alphonse Karr in 1849 and as many readers will know this phrase is normally uttered with an air of Gallic resignation and means the more things change, the more they stay the same.

Even back then M Karr could conceivably have been thinking about a future Norwich City under Dean Smith, and that proved never more true than in our 3-1 win over Stoke City dans La Rue Carrow on Saturday.

Were there green shoots of consistency? Not really. But was there a small but tangible pendulum swing in which, for once, things went for us rather than against us? Affirmative, says I.

This centred on a combination of three small things that added up to the three goals that went down a treat with the City faithful, the first inspired by young Liam Gibbs.

Todd Cantwell injected some urgency when he and Marcelino Nunez came on for Isaac Hayden and surprise starter [it surprised me, anyway] Onel Hernandez on 68 minutes. Credit to Dean Smith for this double change as it saw City considerably up the tempo.

Shortly after this Gabriel Sara fed Ramsey on the right and his ball into Pukki saw the Finn cheekily stop it virtually dead for the Villa loanee to stroke home for the second. The Pukki of old popped up in style when it absolutely counted.

For the third – and killer – goal a lovely through ball from Cantwell for Nunez saw a decent shot pushed out by Bursik and Sara literally couldn’t miss the rebound.

On another day we wouldn’t have had that burst from Gibbs, the moment of quality from Pukki or that sublime pass from Cantwell. Or perhaps more to the point we might have had all three and received no tangible reward from any of them. It’s worked out that way before this season, after all.

Let’s not fool ourselves, Bursik’s failure to hold on to anything – or lack of desire to even try to do so – helped immensely. I can’t imagine Alex Neil being particularly pleased with that display from his one-cap England under-21 international.

When the team selection dropped several of us were less than pleased with Smith’s midfield, with one well-known MFW wag [who should surely remain anonymous] suggesting it was “as soft as a box of Turkish delight”. I’m glad to say that Alex B was wrong, even though I did agree with him at the time!

Unfortunately, bookings are becoming as torrential as yesterday’s early morning rain. We somehow collected another six on Saturday, which serves as our compulsory post-match downer.

So what was it like in the Barclay, Don H?

“The first half was the very definition of Championship mediocrity. Nothing much was happening on the pitch and the crowd were quiet.

“The Stoke fans, who didn’t look like financial directors, took the opportunity to let us know that they thought our support was flipping mute [I’m sure that’s what they were singing]. The one piece of quality in the half came with about eight minutes remaining when Gibbs made a surging break from midfield, eventually resulting in a Ramsey goal that probably stopped a halftime crescendo of booing.

“The first 20 minutes of the second half showed no real improvement. But, following the introduction of Sara and then Nunez and Cantwell, things improved greatly. Norwich started to run forward with attacking intent and looked like a team too good for the likes of Stoke. Two more very good goals followed, and the mood lifted considerably.

“The last 20 minutes showed how good we can be when playing quickly and accurately. Dean Smith should listen to the anthem and never mind the danger.”

I’m going to sign off with a couple of further quotes, one from the 1930s courtesy of the French/Algerian philosopher Albert Camus [ top left 🙂 ] who was once a promising goalkeeper with Racing Universitaire d’Alger, and the other from Norwich City Head Coach Dean Smith this Thursday.

You, dear reader, must decide who said which.

“Don’t walk in front of me… I may not follow.

“Don’t walk behind me… I may not lead.

“Walk beside me… just be my friend.”

“My team at Walsall, I got headhunted by Brentford.

“My team at Brentford got me headhunted by Aston Villa.

“My team at Aston Villa got me headhunted by Norwich City.”

Camus was an absurdist while the jury is out on Smith. I am sure that one of them knows what he is/was talking about.