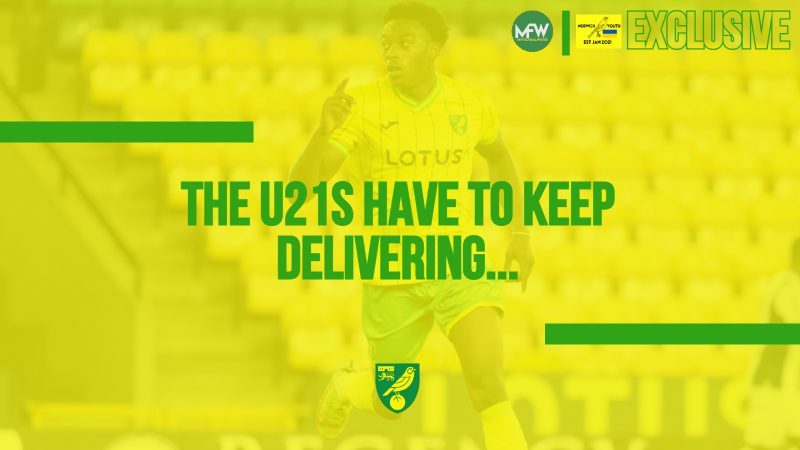 City’s Under-U21s have had an impressive start to the season, and after eight games were unbeaten after collecting 16 points.

It left them in second place, six points behind league leaders, Leeds United, with City the only team to have taken points from them.

Throughout Leeds’ Premier League 2 campaign, they have used a high volume of first-team players – the likes of Patrick Bamford, Mateusz Klich, and Adam Forshaw have all featured.

West Brom have always been a competitive team in the PL2 and are known for producing combative midfielders, as well as dynamic attackers. They pose a challenge for any team and in Taylor Gardner-Hickman they have a breakout star who demonstrates high energy levels and undoubted quality.

In the two games last season, WBA overpowered City, especially in the midfield area and one player who had a strong influence in the games last season was Quevin Castro. Castro, who was involved in the Norwich development system, is now on loan at Notts County.

But the West Brom side that came to Carrow Road last Friday, possessed more of a technical edge, meaning City had to maintain a structured shape.

Due to Abu Kamara’s absence, Norwich switched to a back five, resulting in them having to familiarise themselves with a new shape. Despite Kamara not featuring, Norwich welcomed Sean Stewart and Jaden Warner back in the defence, giving the team additional quality in the defensive third.

As alluded to above, the Canaries wanted to maximise the width of the pitch, whenever they got the opportunity.

Matos and Omotoye executed this effectively as Norwich looked dangerous in wide areas throughout. Omotoye, especially, had the beating of the full-back on a number of occasions. Tyrese linked up with Dickson-Peters across the match, and their connection has looked promising this season – despite not combining for any goals this season.

Omotoye’s career path has been fascinating over the last 22 months. From making his first-team debut in December 2020, to being back at U21s level, two years later, I’m sure he is determined to get back into the first-team picture.

He has been on loan to several different clubs in the last two years – Swindon Town, Carlisle and Leyton Orient to be exact – and although he showed some bright cameos across those clubs, he was unable to turn those promising performances into goals.

It feels like Tyrese needs to be loved again, as there’s a bright prospect with loads of good attributes. He’s an imposing, quick, and physical forward, who wants to drive at defenders to create opportunities.

Omotoye scored his second goal of the season last Friday, with a clean driven strike into the bottom left corner. He took the goal, with a huge amount of confidence – something he’ll be driven to do until the end of the season.

As mentioned above, Sean Stewart also put in a good performance, after a period out on the sidelines. The Northern Ireland U21 international, performed a disciplined defensive role, while also demonstrating some moments of attacking quality too.

The three-back formation is familiar with Stewart, as he plays that shape with Northern Ireland. He operates in the left wing-back role, meaning he has the responsibility to produce a sound attacking and defensive display.

Every time Stewart plays, he impresses me. His game continues to become more accomplished at U21s level, his positioning is sensible, while his quality from crosses is also very encouraging. He could quite easily be another player, who tests himself at first-team level (or more likely on loan), in the short-term.

However, it’s important to add that Stewart hasn’t played an abundance of football for 18 months now, which puts a question mark on the number of games he’s capable of playing a month.

The player who I was super impressed with last Friday was Ben Watt. The ex-England youth international, who has played with Charlie Patino, was exceptional against the Baggies.

Watt has spent the majority of the season playing at right-back, playing 486 minutes, whilst also contributing with two assists. He was originally on trial with the U18s last season, and Norwich decided to reward his performances with a professional contract in the summer.

Throughout the game against West Brom, he showed a real urgency to play the ball forward quickly. He continuously found his players in attacking positions, especially Omotoye. Not only did he bring a quick tempo to the Norwich midfield, but his passing was also accurate.

Watt’s ability to do the basics wellwas hugely impressive against the Baggies, as he provided an exceptional defensive display. He intercepted and pressed brilliantly well, which helped the U21s pick up a solid point.

Watt’s energy in midfield was useful too, due to the fact West Brom looked to play through the lines, meaning energy levels needed to remain high, in order for the midfield to block the forward West Brom passes.

It was a sublime performance from Watt, considering he’s barely played central midfield for Norwich U21s.

Mentions also have to go to Finley Welch and Ken Aboh, for adding an attacking spark to the game. It’s clear to observe that they were full of confidence, probably because their performances for the U18s have been remarkable this season.

Finley Welch, came on in the 60th minute, and really impressed with his ball control and passing in difficult scenarios. Fin, traditionally operates as the defensive midfielder for the U18s, however, he seemed to relish the attacking freedom he got in this encounter, with Watt playing deeper.

Ken Aboh also looked lively, as he showed glimpses of real promise. There were a couple of scenarios, in which he dribbled past two or three West Brom players successfully.

However, he’ll still be kicking himself, that he hit the post late on after his shot was attempted for the bottom left corner. Aboh’s general play has always been good, but he’s talented enough to score more goals.

It’s only right that we also mention Brad Hills. The local lad travelled up with the first-team squad to play Burnley, on the 25 October and despite not featuring in the match, it’ll have been a very proud moment for him and his family. I’m sure Brad will also see it as a very encouraging moment for him to kick on, knowing that he’s admired by Dean Smith and co.

I’ve watched Brad play on a number of occasions now, and he’s a very assured central defender. He’s successful at winning his one-on-one battles aerially and on ground level, while also being competent on the ball.

A huge element to his game is that he’s a goal-scoring defender too as he’s so strong aerially. There is a visual representation of Hills’s abilities on our Instagram page.

Theoretically, this was supposed to be Hills’s first full season, playing at U21s level, although his and the club’s aspirations may be higher, after making the bench against Burnley, and considering Lewis Shipley and Jaden Warner have played more development football than him.

The U21s also played away yesterday at Nottingham Forest, and unfortunately lost their unbeaten record in a 4-1 defeat, but don’t have to wait long to get that defeat out of their system as travel to Aston Villa on 4 November. It will be the last PL2 Div 2 game before the winter break, so City will be looking to finish strongly.