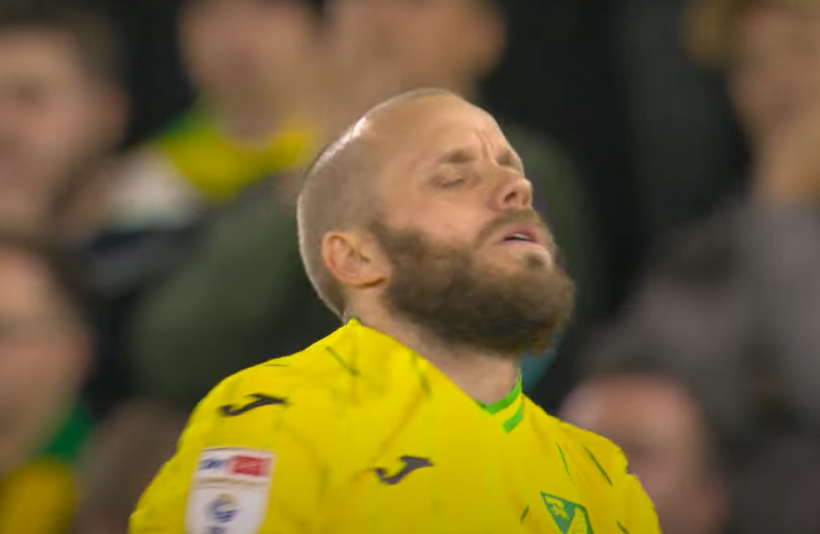 The games continue to come thick and fast in this weird, World Cup-affected season. Following a morale-boosting win at the weekend, Smith put our a team that was evolution, rather than revolution, and one that few fans would have disagreed with.

The game exploded into life with a horrific-looking challenge on Sam Byram by Iroegbenum.  At first sight, it looked like a straight red, but with the benefit of a TV replay, it looked like the referee probably called it right with a yellow.

In contrast to so many recent games, the passing was quick and progressive. The full-backs, Sam McCallum in particular, were pressing high up the pitch as City flooded forward. McCallum played in a decent cross, only for Gabriel Sara to head over.

After 10 minutes, City made a smooth move forward. Todd Cantwell had McCallum outside of him. Initially he moved infield, taking several QPR players with him, before playing the call wide. McCallum’s cross was met with conviction by Sara but keeper Jieng made the first of a number of good saves to tip the Brazilian’s shot over.

Not to be outdone, Angus Gunn then made a similarly good save at the other end to deny Chair, as QPR hit back on the break.

That was an isolated moment though, in an opening period when City were dominant and it looked like a matter of when, not if, they would score.

Teemu Pukki seemed to have a succession of chances. Sam Byram played a long ball forward to Aaron Ramsey deep in the QPR half. His cutback was met by Pukki whose shot was goal bound until Jieng intervened.

Then five minutes later City broke up a Rangers’ counterattack. The ball was played to Pukki who cut inside superbly to leave the defenders trailing.  His initial shot was blocked but his follow-up hit the inside of the post.

To be hypercritical, had he squared the ball, Ramsey would have had a tap-in – but who am I to criticise the decision-making of a born scorer like Pukki?

From then on QPR gradually got to grips with City. They moved their press higher up the pitch and restricted the moves out from the back. That said, other than a few wild shots, they showed little going forward and the half appeared to be petering out.

Then on 44 minutes, Cantwell won a ball deep in the City half, burst through the midfield and was bearing down on the QPR goal with only the keeper to beat. Chair caught him and they tangled arms, resulting in Cantwell going to ground.

The referee gave nothing.

To be fair, Cantwell looked leggy by that point and went over almost gratefully, but we’ve all seen these given – and if it had been, it was a straight red.

Those hoping for more of the same from City were disappointed as the second half began. Rangers had clearly learned their lessons. Now they pressed with intelligence, content to let Grant Hanley and Ben Gibson have the ball, but blocking the outlets with a line of four attacking players.

To their credit, Hanley and Gibson were still trying to move the ball more quickly than of late, but time and time again whenever they worked the ball to either fullbacks or the midfield, the receiving player was closed down quickly and the ball inevitably ended up at Gunn’s feet.

To me, watching from afar, it seemed that the gap between the back four and the rest of the team was too large, especially compared to the first half.

The fullbacks or Gibbs/Hayden were receiving the ball deep in the City half, with the remainder of the City attacking players almost nowhere in sight. As a result, the game stagnated and the home support, for the first time in the evening, became restless.

Perhaps the closest City came to scoring in the early part of the half came from an audacious lob by Cantwell 20 minutes into the half. The ball was headed clear from a corner and Cantwell initially appeared to just loft the ball into the area. However, it quickly became clear it was dipping under the bar and Jieng had to scramble to touch it over.

QPR made the first changes, bringing on Chris Willock. He almost immediately scored with a shot from distance. Gunn got his fingertips to it so it will go as a save. Whether he altered the trajectory of the ball is up for debate.

Before I upset the keepers’ union further, as the ball came back off the post, QPR crossed the ball in for what seemed a certain goal. Somehow Gunn got down to it and beat the ball away double-fisted from behind the goal line.

The onlooking Krul must grudgingly realise that he is set for a protracted period on the bench.

Smith made changes of his own. The excellent Cantwell was taken off, along with Sara who had had a bright first half but faded – along with many others – at the start of the second. Onel Hernandez and Marcelino Nunez came on, followed by Max Aarons and the omnipresent Kenny McLean, as City swapper full-backs. Kieran Dowell also replaced Isaac Hayden who was clearly tiring.

QPR went into defensive mode and City once again began to press. A Dowell through-ball found Hernandez whose powerful shot hit the keeper’s side and went over.

Then a decent spell of possession ended with a good ball by Aarons to find Pukki. He cut back but was off balance and shanked his shot well wide.

As the half drew to a close, City forced a succession of corners. From the final one, and with the last kick of the game, Hanley hit the post with a rasping back post shot.

How you view the game depends on whether you are a glass-half-full, or half-empty person. The latter will have seen a City side, once again, good for 20 minutes but then falling short for the remainder of the game.

The half-full brigade will have seen City move the ball much more quickly than of late, weather a strong QPR start to the second half before moving forward to nearly win the game.

For me, there was some evidence of green shoots of recovery.

The side looks more balanced with a proper left back, a right midfielder instead of a miss-played striker, and 4-2-3-1 instead of 4-3-3. But some old problems persist.

Without the presence of Josh Sargent, whenever Gunn is forced to play long to beat the press, it is almost inevitable that the ball is coming straight back.

Better? Yes.  Good enough? Not yet.