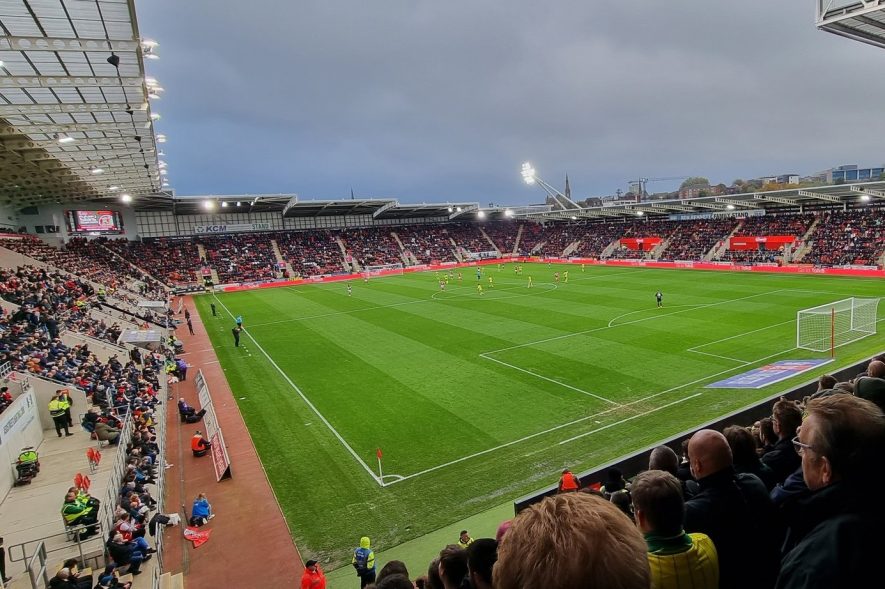 Wins in Rotherham don’t come easy. They never have.

And in recent times, Paul Warne or no Paul Warne, any point there is hard-earned.

While to the watching world, the Millers are not considered Championship hopefuls, anyone who’s made the trip to Millmoor or the New York City Stadium will know exactly what I mean.

On the pitch, they battle like you wouldn’t believe and seldom take a backward step. In the stands, they roar and growl and snarl. A warm welcome never awaits.

So I’ll take a bitty 2-1 win there all day long. Especially one that contained some good individual performances and a few spells of the football we’ve been awaiting all season.

But it wasn’t about beautiful football or tricks and flicks. It was about matching Rotherham in the toe-to-toe battle and managing a game and an atmosphere that grew increasingly feisty and tetchy as the afternoon wore on.

At Bramall Lane, in not dissimilar circumstances, we didn’t manage it well (what is it about South Yorkshire?), but yesterday we did. And I’ll give you two words:

In Sheffield, his match fitness was clearly at the lower end of the scale. So much so, after an hour he was blowing from where the sun don’t shine, and so it was no coincidence that the final half hour was when City found themselves under the pump.

While I’m sure the Colney conditioning team will be telling Dean Smith that Hayden is yet to reach his optimal level of fitness, there’s now enough in the tank to endure 90 high-octane minutes.

That he was still covering the ground and making tackles in injury time was a sight for sore Canary eyes.

This was the Isaac Hayden we’ve been waiting for. A dominant force in the centre of the pitch who provides a shield in front of our two centre-backs while offering a rock-solid platform from which the rest of the midfield can operate.

It’ll never be eye-catching. He’ll seldom hit a raking 40-yarder or an eye-of-a-needle pass to release Pukki in the channel, but he’ll scrap and harry and win balls he shouldn’t. And when teams look to hit us on the break, he’ll be there to get a foot in or intercept.

A player’s player. Usually appreciated more by those he plays alongside than by those who watch from afar. It’s a dirty job but someone has to do it, and we’ve been missing that person for a very long time.

It’d be daft, of course, to get too giddy over a scrappy 2-1 away win over a team that’s 17th in the Championship, but when they’ve been few and far between of late, it’s only right that we pluck out some positives and even offer credit where it’s due to the head coach.

(Before anyone screams ‘hypocrite’, it is okay to be over the moon with a City win and yet still believe a more innovative and progressive coaching team could make this group of players better).

Smith’s decision to leave out Todd Cantwell after his bright and breezy display against QPR was a brave one, and one that saw him take a considerable amount of pre-match flak.

A decision that met with a gentler response was Josh Sargent being spared the wide-right shift in favour of a more central role where he was free to get close to Teemu Pukki. Not for the first time, it was a combination that showed enough promise to be considered going forward.

In order to accommodate a front two and not get overloaded in the centre of the pitch while still playing a four, it was necessary to resurrect the old Paul Lambert diamond, and it had a nice balance.

With Gabriel Sara and Kenny McLean in the role of Hayden’s outriders, it was necessary for both to tuck in and so the width had to come from the full-backs; hence the importance of having a left-footed left-back and a right-back willing to make good use of that space.

Sam McCallum and the recalled Max Aarons both fulfilled their brief well, and it was good to see some appetite and oomph back in Max’s game after a fairly miserable run of form. His linking up with Sara, especially early on, was one of the bright spots of the afternoon.

And McCallum’s ability to whip in crosses with that more-than-tidy left foot is another string to the bow and will hopefully pay dividends going forward, especially when Sargent is playing centrally.

Sara, the horror show of that blind and loose crossfield pass aside, is starting to become more effective too, and is showing one or two of the touches we’ve come to expect (but have rarely seen) of a Brazilian midfielder.

And Aaron Ramsey too has started to add productivity to his promise and Smith will argue that his match-winning tap-in was justification for picking him ahead of Cantwell in that number 10 role.

So, a win and a solid performance in a game that was incident-filled and, yes, enjoyable.

If we can beat struggling Middlesbrough at home next Saturday – by no means a given – one could even argue that we head into the World Cup break in decent shape.

Let’s also not forget that we’re yet to beat a team in the Championship’s top nine.

The ship may have steadied but the uncertainty will only subside when we start beating those sides near and above us. Wins against the division’s big boys are what will turn the tide.

But for now, let’s just enjoy that winning feeling.