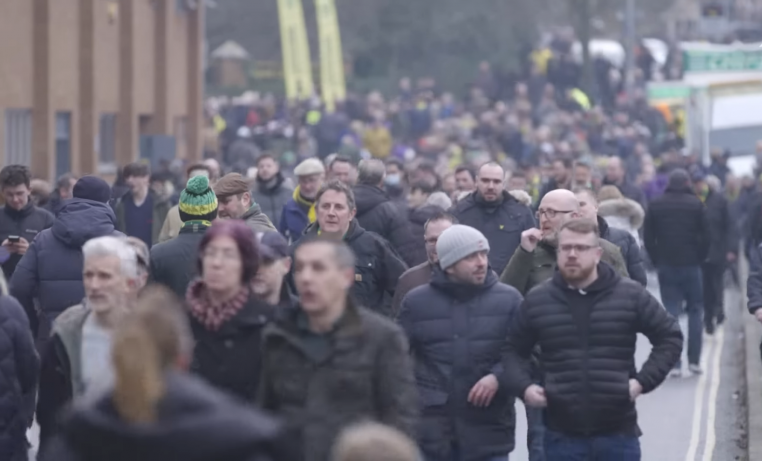 As we are surely all thoroughly mentally exhausted by considering matters both on and, particularly, off the Carrow Road turf, I thought I would turn to the Posse to provide a bit of light relief.

Or to be strictly truthful, Posse member David C, better known to MFW types as Cutty, turned to the rest of his fellow sheriff’s men and suggested they offered their thoughts on how things might pan out in what will surely go down in Championship history as one of the most open anybody-can-beat-anybody-else campaigns in a long time.

My four horsemen, who are not connected to but more disconnected from their NCFC boardroom equivalents, enthusiastically leapt at the chance for some shooting in the dark, and here is what they came up with.

Alex A failed to entirely shake off his elven cloak of understated disinterest but cheered up enough to say:

“Here we are more or less at the halfway point in the season and we find ourselves in fifth place, which on the face of it isn’t too bad.

“However closer examination of the actual numbers shows that while we are nine points behind Burnley at the top of the table, we are only nine ahead of Wigan in 22nd!

“I always felt that October would be a defining month for NCFC, but I really didn’t expect it to be as bad as it turned out.

“There is now so much disconnect between the Board and the fans whereas only two years ago things were superb. I no longer look forward to home games.

“Yes, DS has had to contend with injuries to key players, but most are back now. However, our play if anything is worse and there is a growing feeling of discontent among the fans.”

Meanwhile, Alex B points out that are too many clubs in the shakeup at the end of the first half of the season for any concrete predictions, but that didn’t stop him from taking a quick look at some of our rivals.

“Coventry could be a real dark horse with games in hand and a manager [Mark Robins] that knows how to get the best out of his players.

“WBA are another club that were expected to do well and are finding form under a new stewardship. They could have money available to strengthen in January.

“Watford experience more twists and turns than a corkscrew. A novice manager was never going to work so enter Slaven Bilic. A few Prem clubs are looking at their forward line and keeper so much could change in January.

“Michael Carrick has started well at Boro [I noticed that last week – Martin] and Steve Gibson might, at last, have got the final piece of the jigsaw after Warnock and Wilder never really got them going.

“Sunderland, Luton, Blackpool, Rotherham, and Huddersfield have all changed managers this season and a little run of form could see any of these make it into the top six, while QPR and Millwall usually fall away after Christmas.

“Norwich need a change and that will be discussed on many platforms but Dean Smith’s record of a 28% win rate at City is one of the poorest of the lot.” ***

Article originator Cutty sees the competition in the league as hot and getting hotter.

“Burnley currently have 41 points, which equates to a possible 90 points at season’s end. Their 3-0 win against Blackburn Rovers is indicative of their form with 40 goals scored and only two games lost so are definitely an automatic promotion team.

“Sheffield United have 38 points, the same 11 wins as Burnley, 35 goals scored, and only 19 against so promotion beckons for the Blades while Blackburn seem a reasonable tip for a play-off place despite a poor GD of plus two with 24-22.

“The next six [including Norwich] down to Preston on 31 points don’t have a fag paper between them and I would also include the three teams down to Reading in 12th on 29 points as possible playoff candidates. That’s 12 clubs fighting for promotion!

“At the bottom, Huddersfield are in trouble and the other two relegation spots could go to any of the next eight including Rotherham in 16th with 26 points, just three above the danger zone, and also three points below my potential promotion contenders. That’s nine clubs fighting to survive. Competitive isn’t in it!”

Bernie Owen is nothing if not pragmatic when he says:

“I have always been a believer in giving the Championship ten games to settle before panicking or gloating. Well after 10 games and 20 points on the board I should have been gloating. But performances are also part of the deal, and we were not putting teams to the sword and often hanging on in there to claim a win.

“The last batch of ten games has seen a return of nine points. A run of current form only ‘bettered’ by Wigan who have managed seven. Performances have been consistent – we haven’t become worse as the season has progressed but have been consistently flat.

“Where do we go from here? Doing the same will see us gently slide away. Burnley and Sheffield United seem to have enough about them to make a push for automatic. Can anyone spoil the party for them? Coventry with a return of 22 points from their last ten games could be the season’s surprise.

“We have to up our game and consider if Smith is the man to get the needed response [I’ve considered. He isn’t – Martin] The next three away games at Swansea, Luton and Preston don’t look too appetising. The next three at home see us entertain Blackburn, Reading and Watford. By then the window will be open and we could either be in the top six or lower mid-table.”

*** Thanks to the Posse as always. They’ll be back next week to look at just how bad Dean Smith’s record is alongside previous Norwich City managers, and I’ll give MFW readers a heads up: it doesn’t make pretty reading.