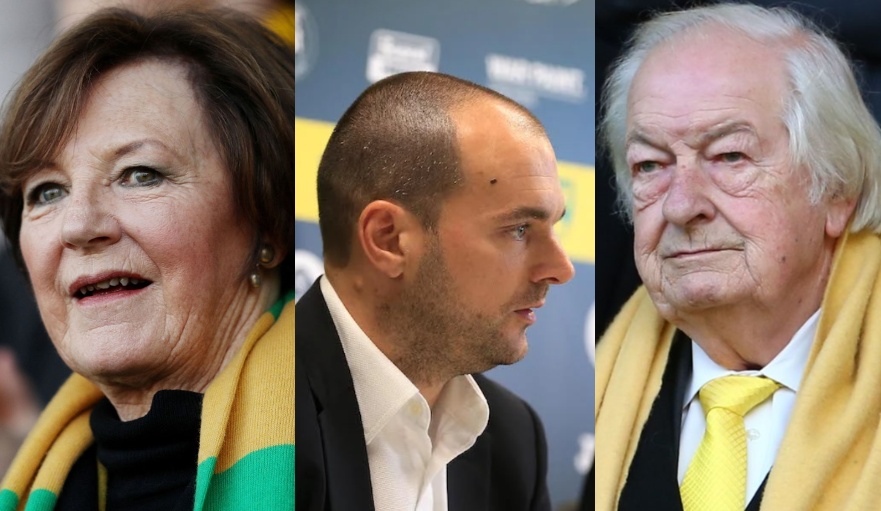 The World Cup is upon us. Domestic top leagues are paused and we are left with a few weeks of reflection.

The headline act has to be the fact that Dean Smith has utterly failed to connect with the City fans. It may be easy to blame this upon the often turgid football his team has delivered, but perhaps a more in-depth look might reveal more about why he has yet to be loved by the Norfolk crowds.

There is a lovely line in Blackadder Goes Forth, where Baldrick says words to the effect of:

In other words, how did we get to a situation where the fans are so unhappy with the manager?

I first followed City in 1978. Very precise? Yes, because I was bought the World Cup 78 Sticker Album, which came with the previous season’s Football 78 Album, and a packet of free stickers for free. Inside I found, among others, Everton’s Bob Latchford and City’s Graham Paddon.

A few playground bartering sessions saw me secure a few more of the City squad, but other than my bemusement as to why I couldn’t find England in the World Cup Album, my interest in sticker collecting waned. Instead, I began to collect City related articles from the back pages of the Evening News and stick them in my album, covering all the other teams.

My blood had turned yellow and green and I never looked back.

It will surprise many younger readers to realise that in 1978, City were still relative newcomers to the top flight. Those who seem to feel that we are entitled to be there and stay there should remember where we came from.

In those days you had to guess which three matches were on that evening’s Match of the Day and the clue was usually an in-depth piece on one of the teams on the Saturday lunchtime’s Football Focus.

I recall one such piece about City. It may well have even been prior to the famous Justin Fashanu goal. The presenter described the City crowd as one of the most intelligent in the league – they understood their football.

He described how City, under John Bond, had taken inspiration from Ajax in the way that the club was run. Every team, from the youth set up to the first team, played the same style of football, thus ensuring continuity as young players came through the club and progressed to the first team.

Of course, this ran not just to players. When John Bond left to join Manchester City, he was replaced by his able assistant Ken Brown, and when he left, Dave Stringer stepped up. When Stringer resigned, Mike Walker took over – although if memory serves me correctly, he had only been at the club a few months.

This run of success culminated in our greatest run in the league, and games in Europe and was largely founded upon nearly a decade of continuity and identity.

When Walker was tempted by Everton, City attempted to keep the continuity by once again appointing his deputy John Deehan, but by then, key playing assets had been sold. The fans weren’t happy as a result and the Club descended into chaos as discord broke out between boardroom and fans.

The 14 years that followed saw some of the lowest points in my Canary memory. From the moment Martin O’Neil quit, we had a succession of managers brought in from outside. Every new face saw a change in approach. Only Nigel Worthington offered the faithful any hope.

We had some great years under Paul Lambert, counterbalanced by possibly the worst years under Chris Hughton. Alex Neil offered brief hope but alas, no. We failed again.

When CEO David McNally left, followed by Alex Neil, and subsequently Jez Moxey, we were promised a reset. And a reset we got.

In came Stuart Webber. And he bought in you know who. The club was transformed.

Why? Because we were sold a vision. It was almost back to the future.

Webber told us the Club would have an identity; a style, one that would run through the club and all the teams would play to the same style.

Moreover, we were told that while the faces may change, the style would go on. Work was in place to identify replacements for the managerial team, even for Webber himself, such that continuity would be assured and the Club would continue to move forward.

We all bought into this. And it worked. We were promoted – a season too soon we were told. We needed a ‘little miracle’ to stay up, but it didn’t happen. We held a review, lessons were identified and we came back stronger, stormed the league, and promotion was ours.

And this, to me, was the Baldrick moment. When we went from there not being a war on, to there being one.

At the start of the 2021-22 season, we abandoned those principles. The system that we were promised would endure was changed. We moved from our 4-2-3-1 possession-based system to a 4-3-3, trying to be more physical, hit on the counter, and be more pragmatic.

Everything that the Club had been set up for had changed.

The killer blow was that the Club were unable to recruit players of sufficient quality to make the change to the new system stick. And as the lower echelons had so long been preparing for 4-2-3-1, we had no suitable players coming through the system who could help out.

Yet all was not lost. There was, we believed, still a master plan.

It seemed that our favourite German had reached the end of his powers and could not make the team perform. But fear not, we had been told that there was a succession plan. Those of us that thought the Farke was a spent force had faith that Webber had a list of names ready from which to choose his successor. Coaches that fitted the model.

And then Dean Smith was appointed.

It is a fairly safe bet that Smith was not on that list. For starters, he was still employed when Farke was unceremoniously dumped in a manner that still irks. It wasn’t classy. It didn’t seem to treat him with the respect that he deserved.

In the past, when ‘outsiders’ have come in, it has been because they saw City as a step up (Lambert) or were departing a club on the cusp of chaos. In both cases, there was good reason for the incumbent to be able to readily disassociate himself from his previous club.

Not so lifelong Villa fan Dean Smith, who barely had time to pause for breath on his journey from the Midlands.

Now we had someone in charge who, not only wasn’t on the succession master plan but also clearly had loyalties elsewhere.

None of this would have mattered had the team improved, even if that had only amounted to a few memorable performances in an unsuccessful relegation battle.

But that didn’t happen.

After the new manager bounce, it was straight back to the same performances. The same dismal football, and an even earlier relegation than the previous campaign.

To put it simply, by the start of this season, Smith had shown the City fans nothing that they could unite behind. Even then, all was not lost. A squad of this quality should win promotion easily, right? Then, with his own players finally in place, Smith could win the hearts of the Canary faithful and go again in the Premier League.

And then the season began.

Like Farke previously, it took a game or two to get going. However, readers of my match reports will be familiar with my opinion.

Even when we were winning, we were not convincing. There was no style, no character. No flair.

Let’s not pretend that under Farke, everything smelled of roses, but at least it felt like the club, the fans and the players were all working toward a common purpose.

Whereas now, robbed of what we deemed to be our identity, this is not the case.

Although some have criticised him personally, it is nothing to do with Smith’s character or demeanour. These are just convenient conduits along which fans vent their frustrations; frustrations which could be alleviated by some barnstorming performances.

There was some evidence that the change in direction 18 months ago was justified, but on the pitch we have nothing other than the odd 20 minutes per game where we play well, which only amplifies the feeling that we should be doing better.

And off the pitch, we have worse than nothing. We have a particularly inelegant spat between some officials in the club and the local media, resulting in an official information vacuum, while the club’s own team rearranges the chairs on deck with a series of glossy videos.

The exposure of new shareholders Mark and Mike Attanisio to the Talk Norwich City team only highlights the fact that the club has ostracised the mainstream media.

It’s easy to sit behind a keyboard and lob bricks at the club. I could be totally wrong in my thoughts, but the perceived silence from NR1, as a result, will only lead to something filling the information void.

At the moment, that is discontent. I may be over-egging it, but It feels like we are in 1994 all over again, and the complete meltdown that followed the year after could follow.

So how does the Club recover?

It needs to rediscover that sense of identity, of continuity; the one that did so well for us in the 1980s and 1990s. The one that looked to have transformed the club under the stewardship of Stuart Webber.

It needs to genuinely engage with us, the fans, at all levels. And I don’t mean by producing slick videos by Club management. The Club needs to reopen itself to outside scrutiny. To face the awkward questions. To rediscover its identity and reestablish a path forwards.

Could the arrival of the Attanasios be the trigger for this reset?

Perhaps, but they are currently in an observation phase before deciding whether to fully commit financially to the club. They have already promised changes are afoot but those expecting a subsequent money splurge in order to fund a run in the Premier League may be disappointed.

In the meantime, the current City regime has it in its power to at least begin to heal things off the pitch.

As for on the pitch? Well, reverting to popular media again, in the words of Dr. Evil in Austin Powers, throw me a frickin’ bone here!

If the team begins to convincingly perform on the pitch, one senses the crowd would fall into line behind the team – the opening period against Middlesborough showed this.

And with this, the changes made 18 months ago to our style, and 12 months ago to the leadership would be vindicated, thus buying the Board some time with the fans prior to the Attanasios’ next move.