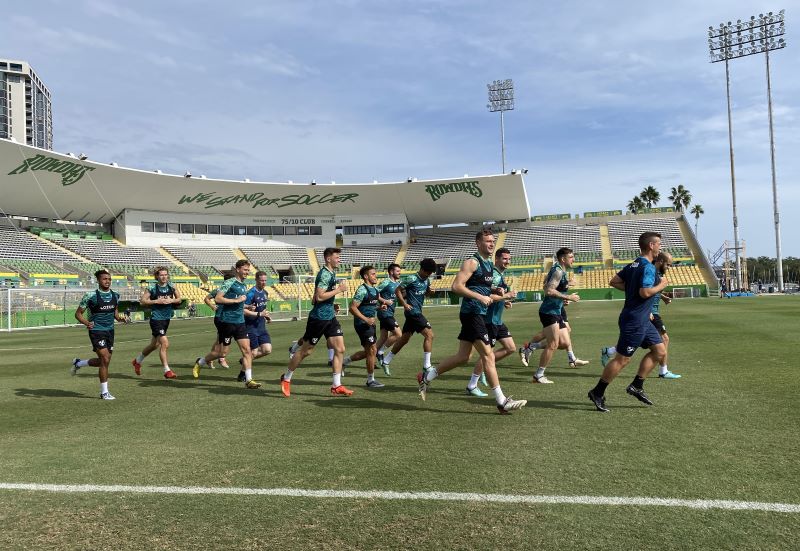 Yesterday, between fifty and one hundred Norwich City fans travelled from across the US to Al Lang Stadium in St. Petersburg, Florida.

Two weeks prior, the club announced they would hold an open training session “allowing football supporters in the area a chance to meet the Norwich City players” at the home of the Tampa Bay Rowdies. The date for the session would be November 25th, also known as Black Friday (or the day after Thanksgiving), and also known as the busiest travel period of the year. Details of the event were to follow.

Unfortunately, I was due to be eight hours south in Key West visiting family. Seeing my dilemma, my kind wife convinced me to cut the vacation short so that we could attend. Plans were made.

Then silence. Not a word on times or logistics from the club.

I called, but no one answered knew. I used the site’s contact form – no reply. I emailed and received a “not my department”. I messaged via Facebook and my wife did too. Still silence. Many on social media were experiencing the same and were aggravated.

Finally, 48 hours prior to the session, on the eve of Thanksgiving, it was confirmed.

I can’t help but think better communication from the club would have allowed more fans to attend.

But those gripes aside, it was fantastic to see these players in the flesh.

They looked fit, happy, and focused. The training session lasted 90 minutes and consisted largely of limited aerobic exercises and a couple of intra-team matches. There was no sign of set-piece training or complex ball skills. I suspect this was more spectacle than rigorous skills-and-tactics training. Some players (who I thought to be fit) were missing. Perhaps a week of Florida heat has taken its toll.

While I hope they return, the southern states are too hot for prolonged training outside of January and February. The stadium had zero shade. It reminded me of a lower-tier baseball field, with the main stands surrounding the corner of home plate. Large parts of the stadium were without stands (or shade) at all.

As the whistle blew to conclude the training session, a round of applause rang out from the ‘outfield’ seats.

“That’s better than Carrow Road”, declared one (not to be named) player.

It reminded me that while I am certainly unhappy with the executive board, and others with the manager, we should remember to target our discontent accordingly.

One person did receive a loud resounding boo. A cheeky Villa fan skulked forward to have his memorabilia signed by Dean Smith, who was first to greet the fans along with Craig Shakespeare.

After showers and changing, the players trickled out. Todd Cantwell first, then Grant Hanley, and then followed Kenny McLean, Marcelino Nunez, and Teemu Pukki.

At this point, my children were frazzled. While I would have waited for Tim Krul and Onel Hernandez, no one appeared to be orchestrating events on any schedule.

The club had stated, “an open BBQ lunch and refreshments will also be available after the training session”. What they omitted was that players and sponsors would eat first, while fans waited. We decided not to wait and vacated the stadium, driving the two hours home.

The only other point of note was the lack of any visible presence from the owners or the Sporting Director. Through binoculars, I believe I saw Neil Adams in the last row of the stands watching on. He was the only person on the Executive Board I recognized.

Was it worth the trip for the club? Who knows. Perhaps in sponsorship dollars and team building.

As for me, well, my boy met Pukki, and there’s no price tag I can put on the joy this gave him.