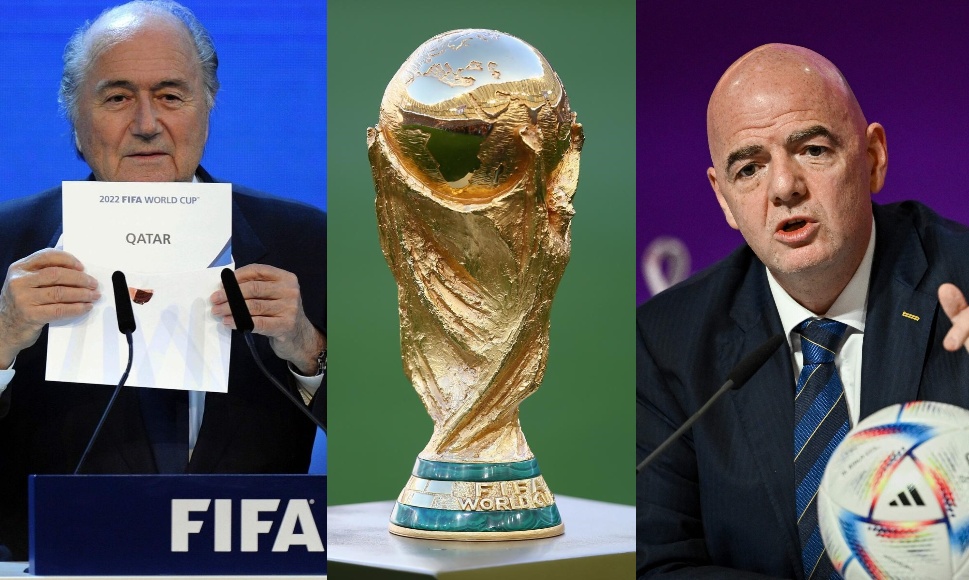 We’re still in the group stages of the World Cup but already the pre-tournament concerns that Qatar would revert to its standard approach of oppression of minorities and strongarming journalists, and that FIFA would simply roll over and do nothing about it have been shown to be totally accurate.

A Danish film crew filming a short preview piece in a public place was descended upon by Qatari police who threatened to smash their equipment despite them having a permit, the One Love armband has been banned despite original assurances that it could be worn without repercussions and Iranian fans protesting against their own oppressive regime have reported secret police filming them in the stadiums with the full collusion of the Qatari authorities.

Meanwhile, the corrupt former head of FIFA Sepp Blatter, having no doubt trousered a big old wedge for the award of Qatar’s vanity project, now has the nerve to say that it was a terrible mistake. His successor, Gianni Infantino, then took subservience to new depths in his bizarre pre-tournament speech in which he praised Qatar, a country in which migrant workers have died in their thousands in the last decade for its treatment of them while accusing European countries in general of being racist and oppressing them.

Then, of course, we had a member of FIFA’s technical study group praising Cristiano Ronaldo as a “total genius” for the way that he conned the referee into awarding Portugal a penalty against Ghana as if such dishonesty was some sort of skill to be learned.

Of course, there will be plenty who choose to ignore the backdrop and say that we should only concern ourselves with the football, but whatever the quality on display at this World Cup, it should never be forgotten that this is all happening in a country with an appalling human rights record and where being gay is an offence punishable by up to three years in prison, and that this World Cup is serving to legitimise that in much the same way that Newcastle United is being used to sportswash the Saudi regime.

However, whatever the situation in Qatar, it shouldn’t blind us to the fact that there are plenty of people in the UK who are quite happy with the idea of LBGTQ+ people being flogged or worse and who still have antediluvian attitudes towards women in football.

I had hoped that after the Lionesses had secured the European Championship in such impressive style, we would see more change but judging by the reaction to ITV fielding an all-woman panel for the Saudi Arabia v Poland game. These are just a few of the comments I’ve seen on Twitter:

“Sadly, this is the road they’re going down these days, all in the name of diversity to keep the do-gooders happy. Not 1 of them has played top-class football, and suddenly they’re experts talking about it.”

“No offence but women should stick to women’s football only.”

“Can’t wait for their in-depth insight considering between them all they have about as much experience of the game at the top level as my 8-year-old nephew.”

The chauvinism is one thing, but the sheer pig ignorance on display is another. To suggest that “none of them has played top-class football” when Eniola Aluko has 102 England caps and Karen Carney has 144 is quite remarkable, but sadly it is far from an unusual response.

If someone is talking sense about the game, why should their gender be an issue? Anyone who listened to the excellent Emma Hayes during the Euros last year couldn’t fail to be impressed by her tactical acumen and ability to interpret the game, yet there are those who would prefer the Danny Murphy school of stating the bleeding obvious simply because it’s coming from the mouth of a bloke.

That’s not to say that all female pundits are good, just as not all male ones are, but to discount someone’s opinion simply because of their gender is pathetic.

Leaving that issue aside, it has been interesting that this World Cup has thrown up a new generation of analysts who are showing up the likes of Murphy, Alan Shearer and Martin Keown, with current or recently retired players like Andros Townsend, Vincent Kompany and Nadia Nadim bringing their experience to give some real insight instead of sounding like bar room pundits.

For too long the former group has relied on lazy cynicism, cliches, and an implied attitude that current players are simply not as good as they were, but the newcomers are offering real insight into modern tactics that their elders appear not to understand.

It’s just a shame that the Women’s Super League isn’t taking a break as Hayes would have been a great addition, but at least women are being represented and allowed a voice, and I have huge admiration for Alex Scott, who has recently come out as gay for wearing the One Love armband on screen while presenting.

It’s sad that a World Cup in the modern era should be a celebration of diversity, but FIFA is yet again shutting its eyes and holding its nose instead of making a stand, or at least allowing the participants to do so.

In his speech, Infantino said, without a trace of irony: “Everyone is welcome. This was our requirement and the Qatari state sticks to that requirement.”