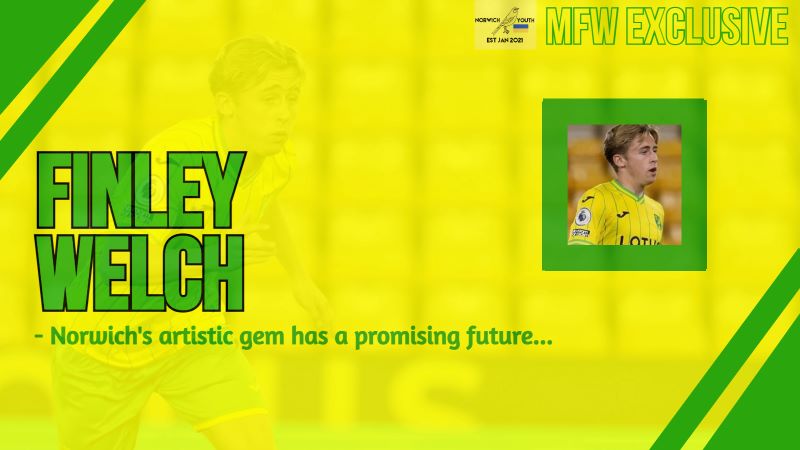 City’s Under-18s have been thoroughly enjoyable to watch so far this season. Each player in the team brings their own personality to the table and collectively they have produced some good matchday performances.

One player in particular who has shone is central midfielder, Finley Welch.

We saw glimpses of his flair last season but not consistently as he was playing in a more defensive role. Then he was often the singular pivot, meaning there was an emphasis on him being disciplined, and steady on the ball.

However, this season he’s been unleashed and part of that is down to the consistent performances of Uriah Djedje, who has tended to be the more conservative of a double-pivot, meaning Welch has been given license to express his technical abilities.

Throughout the U18’s 2021-22 Premier League South campaign, Welch managed just one assist but this season is a different story. With only a quarter of the U18’s season played, he has already accumulated three goals and three assists in ten games.

The U18s have been an interesting case study this season, as there have been lots of encouraging performances that haven’t produced results to match. The most recent example was at home to Aston Villa which ended 1-1. In that game, they recorded 29 shots on goal – more than double the amount of Villa – but were trailing for long periods before Welch’s decisive penalty earned them a point.

Welch is the leader of this young Canaries team. He has the armband this season, has produced some pivotal moments and has recorded a goal contribution in every U18 Premier League Cup game (3), which was almost enough to send them through to the quarter-finals. Unfortunately, Man City snatched that spot, after defeating Norwich 3-2 courtesy of a winner in the dying moments of the game.

But there’s more to Finley Welch, than just his goal contributions, one of which is his ball-carrying abilities.

He has always had this trait in his game due to the fact he played futsal at a respectable level. As a result, he’s confident with the ball at his feet, and instead of dribbling laterally, has a tendency to progress the ball forward and dribble past opponents.

For the U18s, this has been a massive asset to the team as they have a tendency to get caught out playing from the back at times, so feeding the ball to Welch has been a useful option.

With the security of his central defensive midfielder, Djedje, Welch likes to drift to the flanks at times, and a high volume of his progressive dribbles start from wide areas.

A stereotypical central midfielder in a 4-4-2 shape is disciplined, combative, and produces low-risk passes in possession but Fin is the opposite of that; often passing in tight spaces, dribbling past players, and playing on the half-turn.

Moreover, he is effective at winning free kicks. City’s method of playing out from the back means that the two central midfielders must remain concentrated. 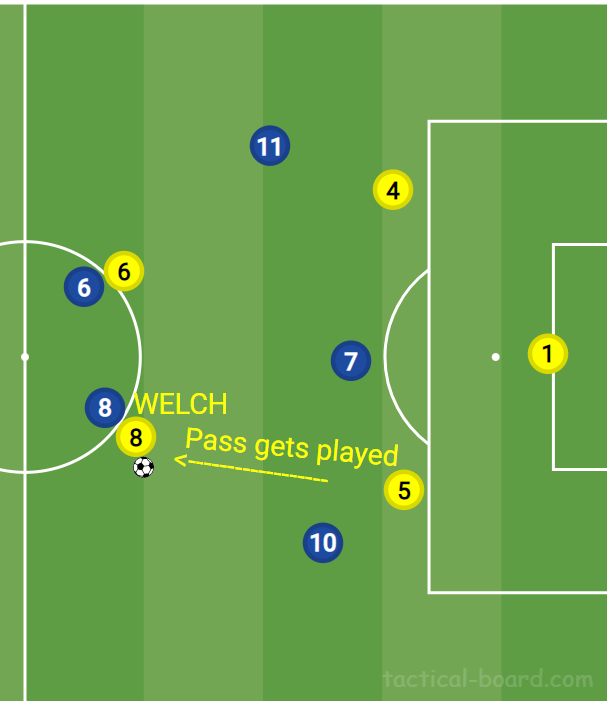 This diagram shows the ‘No.5’ playing the ball into Welch. Whilst the pass is getting played, the opposition (No.6 & No.8), press aggressively to win the ball. It often leads to Welch screening the ball, and winning a foul. Credit: tacticalboard .

The volume of fouls that Welch wins for the team is incredible, and how he retains the ball is even more impressive. Due to his small body frame, he has a wonderful ability to turn quickly, which wins the team an abundance of fouls.

From an opposition’s perspective, Welch is one of the players they know they need to contain in order to gain a positive result. The diagram above illustrates the risk that the opposition take in attempting to stop City from progressing up the pitch.

Essentially, the midfielders press high, almost man-marking Welch in order to stop him from turning and moving the ball up the pitch. The plan is to try and force Norwich to play elsewhere, and avoid using Welch, as he’s the player that connects the defensive and midfield thirds.

The phrase ‘pressure reliever’ is a fitting term to describe his responsibilities for the U18s. He is often the player to win a foul after a mistake in transition from the team.

Another quality area of his game is his pass execution. He is competent at playing short accurate passes and long-distance accurate passes. Similarly, when he performs dribbles and turns, he’s comfortable playing passes in difficult situations.

While it’s unrealistic to compare a Norwich City legend, the way he glides past players reminds me of prime Wes Hoolahan. He’s also composed and calm.

With most of the U18s squad filled up with first-year scholars, having a player that’s already played a season at that level helps the development of that squad.

With the academy setup, always looking for consistency on and off the pitch, Welch is the perfect role model to demonstrate this.

Finley Welch on the ball, against Chelsea. Credit: fleetphotos.

For a man of small stature, he is a tenacious midfielder. With an emphasis on being aggressive off the ball, it makes him a player who’s willing to do both parts of the game.

Off the pitch, Fin is a well-respected member of the dressing room, and it’s understood his fellow teammates enjoy playing alongside him, and respect him as their captain. It’s easy to interpret that on the pitch too, as the U18s have a fighting spirit, and work hard for one another.

In terms of his future, I imagine it’s likely that Norwich will offer him a professional deal. This season, in particular, he’s expressed himself has performed consistently for the team and has proven himself a great leader.

The next step for Fin is to get himself into, and then eventually establish himself, in the Under-21s team.

There’s no midfielder like him in the academy. It’ll be exciting to watch his career blossom.