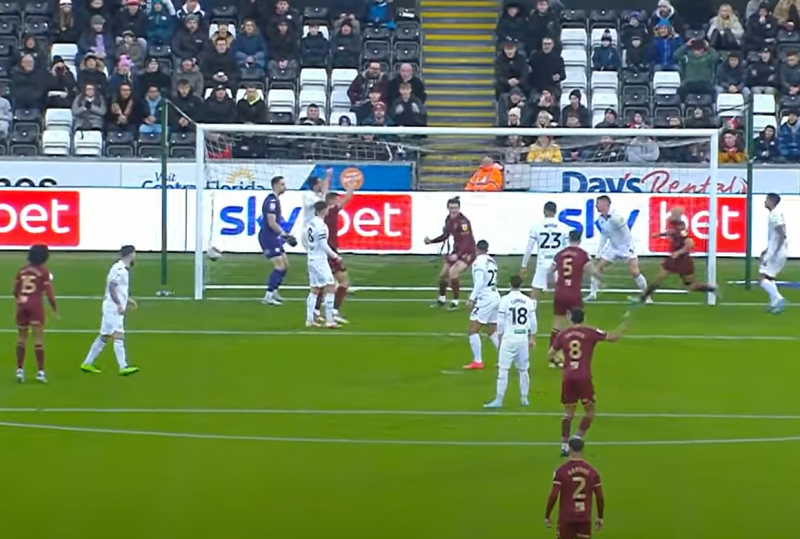 It’s been a funny few weeks. A winter World Cup. Normally feverish excitement in the country has rarely raised above tepid. I fail to get excited by England at the best of times nowadays and this tournament has done little to change that.

With one exception. That display against Wales. For me, it was a microcosm of City in the Championship.  On paper, superior players up against a well-drilled opposition who are dangerous enough to hurt you.

And what gave me the most hope was the way England approached the game. They stamped their authority on the Welsh with an aggressive high press. Wales rarely got moving as a result, and we know the rest.

That is exactly what I expect from a Dean Smith team – particularly after his confession that even after a year in charge, we have the same flaw. We don’t win the ball back quickly enough.

Dean Smith surprised everyone by including Danel Sinani in the starting eleven. Josh Sargent also made it but Aaron Ramsey, Todd Cantwell, and Marcelino Nunez were all missing presumed injured. (As it transpired, Todd was available but not fit enough … apparently. Ed).

And from the off, I was pleased. City immediately and aggressively went after Swansea in numbers.  Within seconds Teemu Pukki was through on goal but delayed pulling the trigger a fraction too long and his shot was saved for a corner. That was cleared for a second corner. This one evaded everyone in the area and came to Pukki who gleefully smashed it into the top of the net. What a start.

From the restart, City continued with the aggressive approach, but Swansea gradually worked the ball forward. A cross into the box was not fully cleared and San McCallum defended the second ball for a corner, which was cleared by Grant Hanley.

Swansea pressed high too, quickly closing Angus Gunn down whenever the ball was put back to him.  They also worked hard to cut out the wide channels where Max Aarons and Sinani were working.

City were able to carefully move forward, but when the moves broke down, Swansea were quick to counter. Ben Gibson was forced to bring Patterson down 40 yards out, earning a yellow for his efforts.  Manning then played a cute free kick which was lashed goalward. The shot deflected off Hanley and Gunn did well to grasp it in a scramble on the line.

Aarons found a way to break the stranglehold, running the ball half the length of the pitch before playing through to Pukki. Trapped in the corner, the Finn played it off the defender for a corner.

Swansea played patiently forward once more, but City by now were dropping off and sitting deep. The defensive lines stifled the Swansea attack and they were forced all the way back to the keeper.

By now, Swansea were clearly in the ascendancy but City packed the middle of the box. Every ball played in was beaten away by Hanley or Gibson, or claimed easily by Gunn.

When City were able to break, they did so with pace but the final ball was always lacking and they failed to fashion another serious attempt on the Swansea goal for the remainder of the half.

The second half, if anything, was even more one-sided. Swansea moved forward in waves. City disrupted the lines, cut out the crucial passes and crosses and when they didn’t, Gunn was there.

Sam McCallum was having a difficult afternoon at left-back. Not necessarily just in the defensive sense.  He was struggling with the Swansea press. Too often he over-committed or was caught in possession leaving the City left flank exposed.

On the right, Aarons was doing a slightly better job, but frequently he and Sinani were hemmed in by four Swansea attackers.

On the hour, City broke free from this stranglehold on the right. The ball was switched crossfield to the left where Sargent played a ball to Pukki. Initially, he went the wrong way but the Finn recovered well.  The ball was moved infield to Gabriel Sara but he could not get a shot away.

The ball went to the right – no way through. Back infield. And then back. Back all the way to Angus Gunn. Thus ended City’s most promising spell of possession in the half.

Moments later, a superb ball found former City loanee Kyle Naughton in acres of space on the Swansea right. City once again squeezed Swansea out. Swansea came again, This time a great cross from the left.  Hanley initially cleared it but the ball came back again and was met by Naughton. His header was downwards (morning Vicar – thanks Chris Sutton for that gem!) and as it bounced up, Gunn was there to tip it over.

Smith made changes. Unsurprisingly Dimi Giannoulis replaced McCallum. Liam Gibbs came on for the flagging Gabi Sara, Kieran Dowell for Sinani, and a welcome return for Adam Idah in place of Pukki.

The changes were mildly effective. Giannoulis looked marginally more comfortable than McCallum, although he was involved in a heart-stopping moment. Swansea sub Oko-Flex took him on on the edge of the box and was fouled. Play continued momentarily and Dimi made slight contact. The Irish winger made an outrageous dive in the box to try and win a penalty but the referee brought play back for the earlier infringement.

Manning elected to shoot from the subsequent free kick and Gunn comfortably tipped over.

Gibbs also did well as the game drew to a close, showing great determination to win a ball in midfield, then tried to play Sargent through on the left, only for the ball to go out for a throw.

A mere four minutes were added on, which City saw out in the same way as the preceding 90, blocking a cross, blocking a shot, clearing the ball.

There is an ancient Indian Parable about three blind men and an elephant. Each holds a different part of the animal and attempts to describe it. One holds the tail, one a leg and one a trunk and they offer vastly different descriptions of the creature.

Were those men to assess the shape of the City creature, the one that held the defence would say, “This is a mighty creature. Strong, muscular. It suffocates opponents and squeezes them out”.

The man with the midfield would say, “This creature is lame, it is weak, it is porous. It allows other creatures to swarm all over it”.

The one with the attack would say, “This creature is a fluffy little kitten. Very few teeth, not at all threatening although occasionally catches you with a sharp nip”

I am of course taking a sideways swipe at Smith’s “We’ll come back from the break as a different animal”.  If this was one of those books split into three where you match different heads, bodies and legs, the City animal would most definitely be a peculiar beast of unintended parts.

Swansea were compact. The interchanged passes sweetly, moved through the thirds well. The lack of a killer final ball had as much to do with City’s resolute defence as it did with Swansea’s lack of threat.

By contrast, City in attack were spread out. The midfield were never close enough to the front three to impose a press – with the exception of the first 60 seconds. When a City player had the ball, the other midfielders were spread far and wide. I hesitate to suggest it, but some were clearly hiding from the ball.

I don’t have stats to hand, but I imagine the average pass length for the Swans was much shorter than City’s.

City got the early goal. Had they, not, they may have approached the rest of the game differently. Who knows.

Is this a different shaped animal? Possibly more resolute, but the only real difference I could see was that they took three points.

I just get a feeling that that statement could be Smith’s “you must have missed my tenure as England manager” moment.