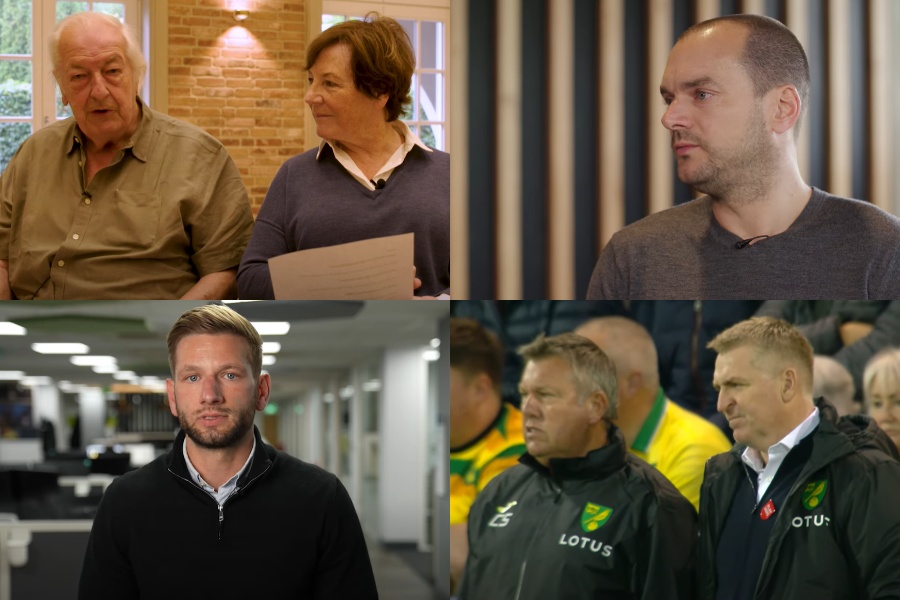 This is the first time in a long while that I’ve been tempted to write anything for MFW about Norwich City.

I’ve consciously made the effort to insulate myself from the swirling vortex of opinions that follows on from being a fan of a club struggling on and off the field, mainly because football isn’t worth the strain on your mental health on top of all the other pressures life brings.

It will also be one of the shorter pieces I write.

On a personal level, 2022 has been tough after losing Dad. And on a football level, Dad was my mentor in the madness that is being a lifetime supporter of Norwich City Football Club.

Yesterday was one of those days in a long lifetime of following the club when everything changes. There have been a few over the years!.

Sitting in the biting cold brings a certain focus to what’s been coming for months – the final bitter argument in a relationship that both sides could have agreed was over a long time ago and saved a lot of rancour along the way. Staying together for the sake of the kids etc.

I wasn’t one of those who decided they hated Dean Smith the moment he was appointed, but there were plenty who did.

I was one of those prepared to give him a bit of slack until he had a fully functional squad to pick from. But, I also knew the writing was on the wall with stuttering performances scraping results and a league position that apparently belies our true quality.

Blackburn were the perfect counterpoint for the occasion – potentially dangerous, but chaotically defying their own erratic performance metrics to somehow occupy a playoff place. Scruffy, awkward, and as desperate as us for a win; aided by a ref with no sense of control.

It was never going to be a classic.

An early own goal finished the game as a contest as City lost their way and fully demonstrated their most worrying trait – a complete inability to grab a game by the scruff and force the agenda.

What unfolded was entirely predictable.

Living in King’s Lynn means our match day routine is a bit of a slog – over an hour’s drive, to park well away from the ground so we can avoid the worst of the traffic, etc.

The result is that at the end of the game, there’s a long hike out of the city to the car, the long haul home (and not listening to Canary Call) – usually arriving home a couple of hours after the game ends.

This means I miss all the early heat from social media.

As I’d sat there in the South Stand in subzero temperatures, my cohort had debated what was wrong with the quality of the squad, the team selection, and missing players; the apparent lack of tactics and the wonder about why players, despite all the problems on display, couldn’t just take responsibility themselves.

All perfectly normal for football fans. But, as I said, the dam broke.

Very early ‘Deano out’ (we initially thought Delia out – it works either way) rang out and precipitated the full pantomime effect as the game went on.

We’d also discussed the reasons why some of the post-covid gaps in the stands were bigger than they had been – an evening TV game, freezing weather, cost of living, train strikes, etc. People voted with their feet before, during, and as the game drew to a close.

All of this is and has been normal in my long experience but what shocked me most was what awaited me on arrival home – Dean Smith blaming the fans.

Football is cyclical. Fortunes rise and fall. Joy and despair are bedfellows, and, worryingly, it’s our turn to find ourselves on a very steep downslope on the rollercoaster.

But one thing is constant…

The moment a club and manager turn on the fans there can only be one outcome.

I won’t turn my back on the club I’ve supported for more than 50 years – they won’t deny me.

My grandkids are desperate to go to their first game and asked for City kits for Christmas. They won’t be denied either. A new generation will begin their journey on 8th January with me bursting with pride alongside them.

But when Dean Smith blamed the fans, he took people like me for granted – the majority who will renew their seats in February and give unconditional support, and I’m not having it.

He also took for granted an owner who is past her sell-by date, and knew his sporting director has been more interested in being up a mountain in Nepal this week than wondering if the head coach has lost the plot.

It was a man speaking who knew there was no connection between the management of the club and the fans, and therefore felt no need to maintain it.

Life is too short to bear grudges but a lifetime is also what it means to be so embedded in support that you can’t sit back and not say what’s wrong.

That’s what the Snakepit and Barclay, and all around me did yesterday.

My dear old mum moved into a home a few weeks ago because life got too difficult without Dad. Sometimes things have to change forever because they no longer work.

And it’s time Deano found a clearer way of asking for the sack.

Me? I’m not going anywhere – it’s my club and you won’t take it away from me, but the board needs to book itself a taxi.

See you on 30th December.