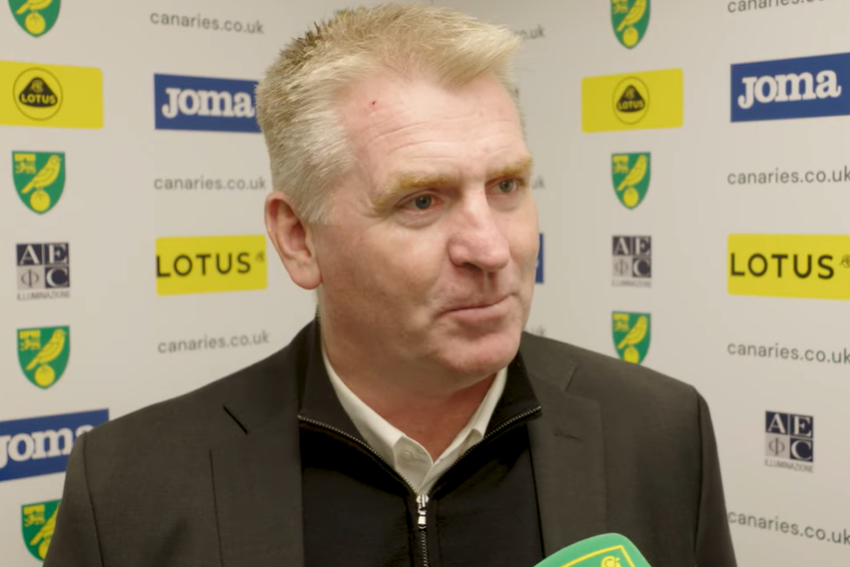 Dean Smith has long been able to speak a language that is used only by a privileged few in the way that an adherent of the dark arts might use certain words during an important ritual to sacrifice a goat in order to ensure some evil spell proceeds along the correct lines.

Geezer Butler once told me that words such as tetragrammaton, ipsissimus and magi might well be used and while the devotees of the left-hand path will know their usual, everyday meaning the High Priest can bring them alive to the point whereby they take on a sacred context all of their own.

Smith is fluent in a tongue, variations of which are spoken by the select few in every footballing nation on earth, called Managerese***. He has become increasingly adept at it since his early studies at the Mike Bassett Academy in Walsall, West Midlands.

Managerese speakers are encouraged by Football Club Directors to use these linguistic skills in order to frustrate, obfuscate and proffer thin excuses for poor onfield performances to the unwashed peasants who know nothing about the game and are largely regarded as the enemy. Otherwise known as the Loyal Supporters, these Untermensch are considered an unwanted nuisance by clubs such as Norwich City FC.

Once their tithe, known as Season Ticket Revenue, has been paid into the Club coffers, anyway.

Managerese Rituals are known as Press Conferences, held with regularity both before and after football matches, recent examples include Blackburn Rovers [home], a fixture which was notable for a 2-0 defeat and all the wrong things for Canary supporters.

Before the Blackburn game and referring to the spawny 1-0 win at Swansea, Smith bestowed this gem upon the faithful:

“Defensively, it was what we wanted. They’ve had one big chance through Naughton. They could have had another hour against us and still not scored.”

And immediately after Blackburn – where the matchday ritual involved an ill-fed goat and many headless chickens – we were treated to this insight:

“I understand frustration and disappointment, but leave it until the end of the game, because otherwise it will just play havoc on players’ minds as well.

“There’s a lot of players out there that have won the title twice for this club and they probably don’t deserve some of the stick they got at times today.

“I know how it works. I know there is a narrative around me and the style of play. That was vociferous. It was not nice. It was not pleasant.”

Managerese is very much employed as a useful tool for the bamboozlement of the great unwashed, of course.

Take the current Todd Cantwell situation. The Dereham Deco seems to have become the Dereham Dobbin. Smith claims he is fully fit and raring to go. which is strange as there was no sign of him in the matchday squad once more on Saturday with a clearly unfit Marcelino Nunez considered above him in the pecking order for a spot on the bench and a late cameo.

Cynics might suggest this is because Todd has been sold and thus wrapped in cotton wool to ensure the January receipt of £750k plus extensive add-ons from an as-yet unidentified club in the Uhlan Bator Major League. Or perhaps the Christmas toys are out of the pram. The situation remains as clear as mid-Norfolk mud.

From mud to grit, or rather lack of it, and not just from those in Yellow shirts on the Carrow Road grass.

Fan consensus was that Norfolk County Council did absolutely nothing to prepare the pavements around the ground for pedestrians and the approaches were lethal. Said Council speaks their own version of Managerese too, of course, offering this standard example on their website:

Some footways in the pedestrian areas of central King’s Lynn, central Great Yarmouth and central Norwich are [also] treated as priority.

Just to pick up on a couple of points from Gary’s article yesterday, firstly the “let’s ignore the ball boy and pile in anyway” incident. There is plenty of footage out there for those who haven’t seen it. Will we be charged by the EFL? I’ve no idea. Should we be, together with Blackburn keeper Thomas Kaminski who, probably unwittingly, instigated the whole thing?

I’ve got my own ideas on that one and I’m pretty sure you will have too.

Gary suggested a crowd figure of 18,000 which I would imagine being a pretty educated guess. Football fans do not need to employ Police crowd-counting techniques for accurate attendance estimates. We just instinctively know, especially on our own turf.

But my clocks all say Sunday, Dec 18, 2022, 13:25, and I cannot source the official attendance figures anywhere. Nowhere online and not even in my Sunday paper, which would normally comfortably have time to print the figure after a 17:30 kick-off.

Are 6,000 peasants on the missing list, Mr. Webber? Abducted by space aliens and/or Christmas shopping? I think we should have been told by now.

Reading this “I was there” view from the indefatigable Don Harold will not lift the mood of the reader:

“Wow, what a shocker. After about a month of exclusive access to the players, Smith and Shakespeare put out a team that does that!

“We were promised that the team would come back as a new animal and it seems to have returned as a mangy old cat, half crippled and very confused. The players don’t seem to know what to do other than play the ball across the back until they lose it. They don’t look fit. This is not surprising, as when I look at S&S I’m not filled with confidence that they spend too much time studying the latest fitness techniques [you naughty boy, you! – Martin].

“The crowd has turned. I don’t know how long the present regime will last, I fear they’ll be there until we can’t get promoted. I do know that the Carrow Road atmosphere will be unpleasantly toxic till then.

“Anyway my philosophy has always been that you shouldn’t let the football get in the way of a good day at the football. The company of friends and the pubs of the Fine City ensured that my mood on going to bed was much better than when leaving the ground.”

To end with I have this week learned that an On the Wall City Brick is for life, not just for Christmas, which in my case is just as well as there’s been no update on mine from NCFC’s Phil Gray and the marketing team. Maybe I’ll get some news on it in time for Christmas 2023?

*** Geezer, who is a renowned Villa supporter, also told me that Managerese is probably derived from the Old French dialect known as lesBalloques Venerables, and that its use was considered more acceptable from Smith in Birmingham as he is a local lad and could get away with most things to this very day as far as the Villa Park faithful are concerned.

Over to you, Geezer mate: