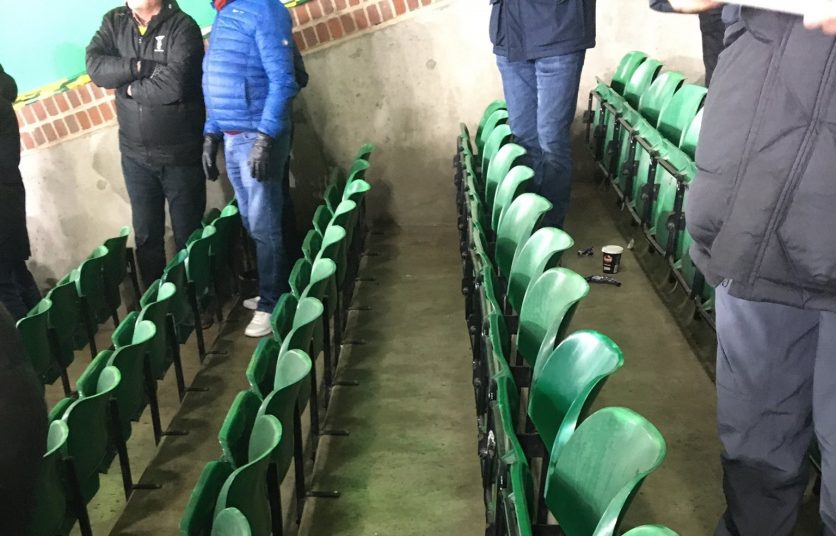 It’s just not fun anymore, is it?

But then it wasn’t exactly a barrel of laughs for much of the time between 1995 and 2008, barring a couple of years under Nigel Worthington.

So why, despite sitting fifth in the table – which we’d have killed for in most of those seasons – is it all so miserable?

For the first time since I bought a season ticket just shy of 35 years ago, on Saturday I thought long and hard about whether to haul myself out into the cold to go and watch Norwich.

In the end, I did it for three reasons – habit, to see my mate who I’ve been sitting (or standing) with for all of those years, and the faint hope that maybe, just maybe, we’d see Dean Smith’s ‘different animal’.

Thousands of others chose the opposite, with whole families who sit near me, and who live in Norwich (so no trains to catch), opting to watch it in the warm at home, in a pub, or not at all. [see header image].

A few hundred more left at halftime, an unprecedented walk-out given we were only 1-0 down and would have gone third with a comeback win.

Belief, already at a low ebb, drained away from fans after Blackburn’s 3rd-minute goal quicker than Stuart Webber can don his crampons.

Here are three of the main reasons Norwich fans are so unhappy.

Smith got pretty much a free pass last season, despite failing to improve a side that was already rooted to the foot of the Premier League when he arrived.

Back in the Championship, we hoped to see some of the ‘total football’ his Walsall side apparently played, or the hard-running attacking of his Brentford side.

I have some qualms about his spell at Villa, who were in freefall in the Championship until Britain’s most expensive footballer returned from injury and propelled them to a 10-game winning run – aided by the likes of Tammy Abraham, Tyrone Mings, and John McGinn.

So what did we actually get? A complete mess of a team with no clear ideology, no identifiable patterns of play, no embedded system, and no consistency of selection in the attacking areas in particular.

Our laughable attempts to beat Blackburn’s press drew jeers, and not because Norwich fans wanted the ball lumped forward, but because they could see four players knocking the ball about, gradually getting hemmed in with their colleagues motionless 30 or 40 yards away.

This is a poorly-coached side, especially with the ball, with many of our two-time title winners regressing rapidly and others barely getting a kick or, in Todd Cantwell’s case, getting more joy from delivering Christmas presents than playing football.

Much is made of Smith’s lack of connection with the fans, but would you really give a sh*t that he doesn’t give it the Farke-style ole’s if he was producing more fluent, attacking football? I wouldn’t.

It’s what got Daniel Farke through a difficult first season, and the start of his ultimately triumphant second – and it’s what ensured there was never a single Farke out chant inside Carrow Road even through one and a bit disastrous Premier League campaigns.

Smith has no goodwill in the bank, either through results, performances, or in engaging fans with a clear vision, or any vision at all.

This is probably the first time in his managerial career he’s had to deal with the kind of hostile chanting that greeted him on Saturday, and his ill-judged post-match comments to Chris Goreham spoke to that lack of experience.

While most fans had Smith down as a nice bloke underperforming, for many there are now Roeder levels of dislike.

He should have been gone by Sunday evening. Which brings us on to…

The breakdown in Stuart Webber’s relationship with many fans and the local media appears to be at the root of a them and us mentality within the club, which may well have fed into Smith’s clumsy comments.

When there is a pervasive atmosphere within an organisation that everyone is against them, it’s probably no surprise when it seeps out in a moment of frustration.

Throw in the finance director, of all people, taking a pop at the fans, and Webber and co’s antipathy to the paying customer could not be more clear.

It’s also a far cry from the way he breezed into Carrow Road promising and delivering, openness, transparency and honesty.

For example, in an interview with Along Come Norwich, he said: “We have to be really open-minded as a club, and I’ve said this to the board, ‘Let’s strip it all back – anything goes, let’s be open-minded, let’s interact with the people who matter – the supporters out there.’ They’re the stakeholders in this and we have to listen.”

Yet when the club did listen, over the BK8 debacle, he could not conceal his disdain of being robbed of maybe £3m by woke crusaders. It turns out £3m would have made no difference to our survival hopes.

Then came the reaction to the Everest interviews, when his words could have been more carefully chosen, the extreme umbrage taken at the subsequent local media reporting, the angry exchanges with fans outside the ground, the so-called ‘breach of trust’ surrounding the breaking of the Attanasio story, and the shutters came crashing down.

“We don’t need the media” is the refrain from inside Carrow Road, and not just from Webber himself. Well, yes and no.

You can put out your video Q&As via club channels direct to fans, but it smacks of propaganda and allows no follow-up questions to either vague or – in Anthony Richens’ case – inflammatory answers.

You can publish your accounts and have your AGM without the media but, unless you’re a shareholder, you’re a second-class fan with no right to hear answers to the challenging questions journalists might ask.

Those journalists who have dared to criticise the club in any way, shape, or form become non-persons, with Webber behaving like a poundshop Xi Jinping.

I spent more than 20 years working in communications and PR, and you antagonise or shut out the media at your peril. Even if you disagree with them, you work with them, you build (or rebuild) relationships – one day, you’ll need them on your side.

Webber has isolated himself, and by proxy the club, from the fans and the media, and that road only goes one way.

When Michael Bailey, so careful with his words, says that removing Dean Smith will not fix the club, it’s clear what he’s referring to – the thin-skinned autocrat who has been given complete control of the football club despite admitting a year ago he was ‘ready to walk away’.

The Stuart Webber of 2017 would hate the Norwich City of today.

The futility of life in the Premier League as a Norwich City fan, and the legacy of gloom from last season has undoubtedly spilled over into this.

That’s probably partly true for the players too, given many of them are the same ones subjected to sarcastic chanting at times last season, with a smattering of boos at the end of season lap of appreciation.

Given eight (I think) of our players are out of contract, several others are simply not good enough for the Premier League, and the cost of buying those that are, there’s little appetite among some fans for a re-run – a deep ennui about our position within the football pyramid itself, at least under the current ownership.

Personally, the sinking feeling of a goal conceded is no longer there, and I celebrate our goals with much more restraint than those heady days of 2018/19 when anything seemed possible.

I do still want promotion, but mainly to safeguard the short-term financial future of the club and not for the dubious ‘thrill’ of taking on the best on the pitch. And not with Dean Smith as manager – that really would be an exercise in futility.

Defeatist? Maybe. But realistic too.