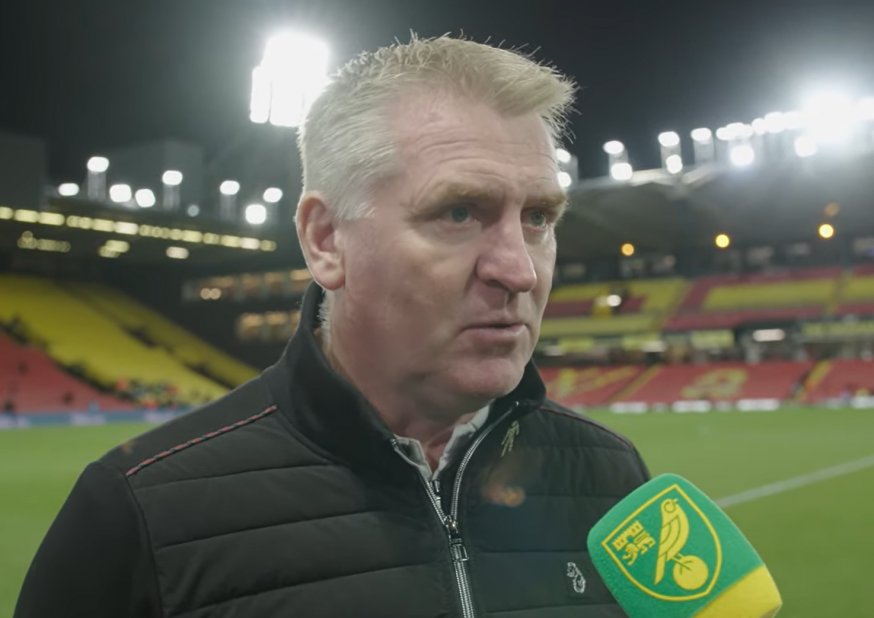 I’m slightly reluctant to submit yet another article, focusing on our much-maligned Head Coach and add to the hostile narrative theory. But I’ll try to remove any emotive vitriol and hopefully dispel the notion that those of us calling for change are rabid maniacs, who are out for his blood.

So I’ll channel the spirit of Mick Dennis and start with some positivity.

I’ve never met Dean Smith. People I work with who have met him assure me he’s a genuinely decent guy. Friendly, unassuming and polite, and wholly undeserving of personal abuse.

The accusations that he’s a clueless, footballing ‘dinosaur’ are also well wide of the mark and possibly stem from a preconception that only young or foreign coaches have the tactical nous to develop a clear game plan and philosophy.

Anyone who has gained their pro license and managed in the top tier possesses a far deeper understanding of the game than those of us watching from the stands. Furthermore, his approach of involving the players in the development of tactics and promoting on-field problem-solving is considered to be progressive in coaching circles.

It’s easy, but slightly unfair, to pull apart quotes from post-match interviews. What someone chooses to say publicly is often far removed from what they genuinely believe or may admit to in private conversation.

“We were cr@p, Paddy. The players clearly aren’t responding to my methods and I’m surprised I’m still in the job”.

While that level of honesty would be refreshing, it would also prove to be career-limiting, so a bullish defence built on deflection and a reliance on spurious statistics are perhaps understandable.

But, for the record, I have never wanted Norwich City to lose a football match, and to avoid any doubt, I want Dean Smith gone.

My reasons are simple and devoid of emotion.

I don’t enjoy watching my team play football under his stewardship and I don’t believe he will deliver the results needed to secure promotion.

As Matt Ware highlighted, the challenge of playing in the Premier League, under our current operating model, is not something to be relished. However, the financial implications of missing out are enormous and the prospect of returning to the wilderness years of Championship mediocrity (or worse) is something no Norwich City fan wants.

Yet, despite his apparent credentials, it’s increasingly difficult to envisage Dean Smith on the City Hall balcony.

My view is that Smith was genuinely stung by the criticism that he lacked a defined playing style. In response, he chose to revert to and stick with what felt comfortable; his preferred playing style and a tried and tested hybrid formation (that could be described as either 4-3-3 or 4-1-4-1, depending on the phase of play).

There is logic in lining up and persisting with a formation that you’re comfortable with. From a coaching perspective, it allows you to focus on the finer tactical details and provide absolute clarity on the requirements of each role.

The fundamental problem is that he lacks the players to make it effective. Furthermore, his approach of placing the onus on the players to find solutions has led to the team looking disjointed and lacking cohesion.

There are square pegs in round holes and they’re being asked to make decisions that don’t come instinctively.

In the circumstances, a more prescriptive coaching style would surely be more appropriate, or better still, devise a formation and way of playing that better utilises the talent you have available.

It may sound ridiculous to suggest that professional footballers are unable to adapt their game, but consider Teemu Pukki. The insistence on playing the Finn as a ‘9’ is understandable, bearing in mind his goal-scoring record. But he was signed specifically for his prowess in specific attacking situations.

Pukki thrives playing off the shoulder of a defender, anticipating and receiving balls in the channels between centre-back and full-back, using his pace over short distances. His effectiveness and attacking threat is significantly reduced when chances are principally created from the wings.

Josh Sargent’s potential and form, make him another shoo-in for the starting XI but it’s clear that he’s not a natural winger. In Smith’s preferred formation, he should surely be starting over Pukki as the attacking fulcrum.

Of the club’s contracted wingers, two are out on loan, meaning Onel Hernandez is enjoying a surprising renaissance, albeit often from the bench. The popular Cuban looks comfortable in the role he’s being asked to play, but the long-standing issue of his end product remains his Achilles heel.

In midfield, Isaac Hayden’s experience has added some protection to the defence when out of possession, but as a single deep-lying pivot, his lack of pace and creativity hinders progression into the attacking thirds. Liam Gibbs offers more in possession but has been exposed without the ball.

As for the remaining spots in the starting XI, only Aaron Ramsey and Kenny McLean seem to have gained Dean Smith’s confidence; the former adding slightly more consistency than the other creative options and the latter providing experience and on-field leadership.

But the reality is we haven’t got a truly settled core and this year’s Barry Butler award is rapidly turning into a one-Josh race, despite him being played out of position.

The players look increasingly devoid of confidence and ideas and it can be no coincidence that City currently have the unwanted accolade of committing the most errors leading to goals. You can blame a hostile crowd but ultimately it’s the coach’s role to create the right environment for the team to play without fear.

Smith is throwing different combinations of pegs into the holes and switching them around at the 60-minute mark to try and effect a change. As a result, there’s no consistency in our attacking play.

Ultimately, his reluctance to deviate from the formation and gameplan, and tailor it to the squad’s strengths is costing us.

That lack of flexibility was horribly exposed at home to Middlesbrough. With City dominating the opening 20 minutes, Carrick tweaked his midfield and completely nullified the space afforded to Ramsey and City’s attacking threat.

And yet Smith failed to respond.

He should be, and is, better than that, but as the pressure grows, and the wagons circle around Colney to mute any dissenting voices, he’s projecting an air of belligerent stubbornness.

Like all of us, I desperately want my team to be successful and I want to enjoy going to Carrow Road again so I’d be thrilled if he turned it around.

My head and my heart tell me it’s simply not going to happen.