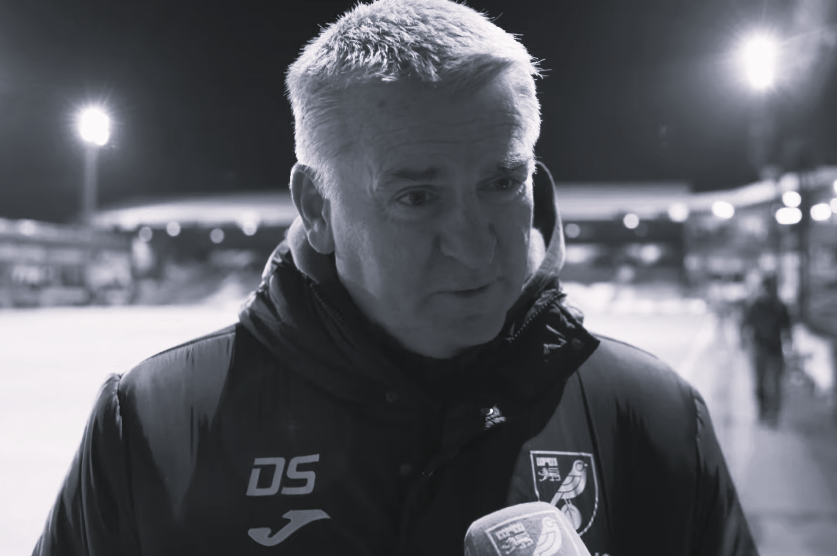 As I write, Dean Smith (as far as we know) remains in situ. Whether he will be by the time I finish this piece… who knows.

But if he is and, more importantly, if he is still here on Friday when we face Reading, then no one wins – unless, of course, you’re a stubborn, cornered sporting director who currently perceives getting one over the City fans as a win.

For every other party – the football club, those who are employed by it, those who love it, and, crucially, Dean Smith – there are no winners if he stays.

With his every passing word, it’s becoming abundantly clear he is not enjoying his time here – why would he? – and I suspect, deep down, he never has. At no point has he looked comfortable in the role, nor in the dugout, and now the dissenting voices are vociferous and loud, it must be miserable.

Equally, he’s a professional and with that comes professional pride and a CV that needs to be as unblemished as possible. There’s also the small matter of a contract that would need to be honoured by the club if it’s they and not he who calls time on his tenure.

But either way, last night’s humbling looks and feels like the final straw. The sight of fighting in the City away end only further magnifies the unrest and the need for decisive action to be taken to – at least in the short term – arrest a slide that’s pitting City fan against City fan.

It’s been the grimmest of seasons, but last night felt like a new low.

If so, another sorry indictment of this increasingly rotten (and rotting) regime.

Talking of which, any decision to relieve Smith of his duties will require Webber to admit he made a mistake in appointing him in the first place – not something the Webber of 2022 appears particularly comfortable in doing. But a misjudgement on such an industrial scale also brings into question his own position.

Let’s not pretend these things are easy though because they’re clearly not. Wind the clock back 13 months and most agreed Webber’s decision to pull the trigger on Farke was the right one, but where it went awry was when Smith was chosen as his replacement. Not only did it appear rushed, it also veered away from the Club’s masterplan.

It didn’t work and it can’t continue.

We compete reasonably well and have, so far, remained free of those bruising Premier League-style thumpings that became our schtick last season because, on paper, we have better players than many opponents but, as a unit, there’s absolutely no pattern or cohesion.

Smith and Craig Shakespeare may give the players the freedom to problem solve on the pitch, which in a different time and place may be considered brave and bold, but that only works when you have players equipped to do so. And they’re clearly not.

While I have no doubt they are all working very hard on fields of Colney, there’s precious little evidence of it when crunch time arrives. It’s becoming increasingly shambolic. In the heat of battle, the thinking becomes muddled and the pre-match messages lost.

It’s a group of players bereft of belief, void of confidence, and without direction. That the coaching team has failed in its most primary of tasks is no longer up for debate.

But also, for this group to be so fragile that it shrinks rather than grows when faced with opponents who are down to ten, says an awful lot about its own lack of cojones.

Technically blessed some of them may be but, as we well know, it takes more than ‘tekkers’ to win games of Championship football.

Some of that steel comes from within, which is why recruitment is crucial – ie. signing the right type of character – but part of it comes down to how the players are prepared, fired up, and motivated. The Classes of 2018-19 and 2020-21 would have, as the saying goes, ran through brick walls for Daniel Farke.

I don’t see this lot running through wet paper bags for anyone anytime soon.

Yet, as we’ve discussed on these pages many times, the removal and replacement of Dean Smith would be only part of the reset needed. The problems run way deeper than a dysfunctional coaching setup.

But his has to be the first domino to fall. That one of the dominos to follow should be the sporting director is a major problem and is why Dean Smith, after several weeks of it being clear his race is run, is still here.

What a bloody mess.