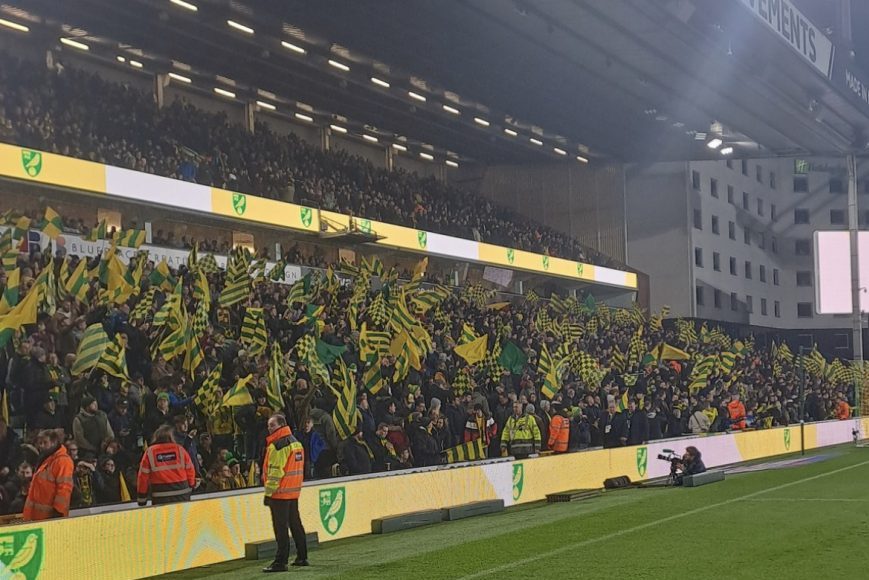 Well, the atmosphere was much improved. I’ll say that much. And there appeared more energy in the team’s performance.

But in terms of productivity, the removal of Dean Smith alone was never going to be enough to get a tune out of this group. Renewed effort and vigour can only get you so far.

Allan Russell and Steve Weaver did all that was asked of them and there was always going to be a limit to the impact they could make over the course of three or so training sessions, but there’s no escaping the fact it was another of those frustrating, slightly underwhelming Carrow Road evenings.

Had it been a Smith and not a Russell in the dugout, the boos would have echoed… again.

The revival, if there is to be one, has to start somewhere though, and there were some good moments when there appeared a greater sense of freedom in the players, but there was also much to be improved upon. Just as there has been since the start of the season.

Russell’s impressive outing at the pre-match presser continued through to his post-match duties, and it was clear that in between, certain key messages had been drummed into the players – notably the need to take one or two fewer touches to get the ball into the strikers.

He spoke pre-match of the need to get Reading’s defence turning back towards its own goal and stayed true to his word, with through balls from deep to try and get Teemu Pukki free in the channel very evident early on. So too the requirement for both full-backs to get crosses into the box.

That all of the above occurred against the backdrop of a bouncing Carrow Road made a for a far more pleasant experience for everybody.

Old habits die hard though and you can’t teach a killer instinct. Neither can you coach a winning mentality. And both were needed to see out a game that was there for the taking.

Alas, this is where we are right now, and is why we no longer reside in the playoff places. That we’re still seventh after losing nine of our 25 games is a little bit daft in itself.

We can, of course, forget the automatic places – they’re long gone – but such is the sheer stupidity of the Championship, we remain well and truly in the hunt for a playoff place. Yet we seem so far off.

While, in terms of overall quality, this group is probably not as supremely talented as we have been told (or would like to believe), it does have enough quality to make top six but, as we’ve discussed many times, it takes more than ‘tekkers’ to succeed in the Championship.

It takes a big old dose of what Luton displayed on Boxing Day when down to ten men, and the type of resilience Reading showed last night, to be woven in among the silky passing and flowing football.

We’ve shown in spells that we’re capable of the latter. But the former?

Only if Russell and Weaver, and whoever follows on a full-time basis, can somehow embed a ruthless, hard-to-beat, and resilient mindset into this group, will this season end the way we all want it to.

For now, the fragility is there for all to see, even if it did take some questionable refereeing to assist Reading on the night. A second and third goal for City would have rendered his blunders meaningless. A 1-0 lead in almost any circumstance is flimsy.

Quite where we do go from here is in the hands of Stuart Webber, and what he can’t afford – for both his own precious CV and for the sake of his employers – is another screw-up on a Dean Smith scale.

I, personally, don’t have any strong feelings over who it should be although I’m never a fan of any appointment that smacks of sentimentality, or which is made borne of familiarity.

I’d be very happy for it to be someone who’s never before set foot inside Carrow Road but who could bring with him (or her) a freshness and energy that swept through the place upon Webber’s first, rather more successful, appointment.

But, whoever it is, there’ll be plenty of fans who will be unhappy with the appointment. That’s life. But we all need to give the new coach a chance, and not write them off before a ball has been kicked.

In the meantime, we have to just be patient, trust Webber to get this one right, and join in with the beat of that drum again against Watford on Monday.

A very Happy New Year to you all.