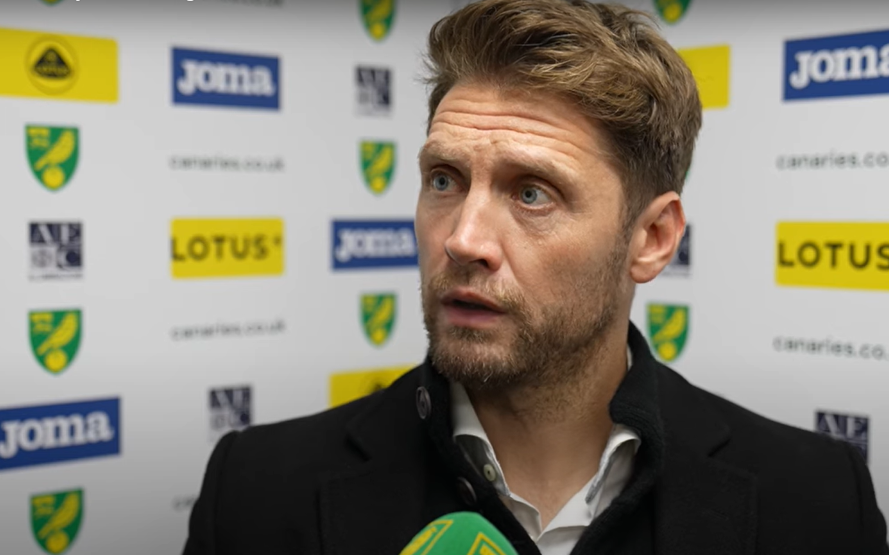 Friday night’s official Carrow Road attendance was promptly announced as 26,218 and by every account I’ve heard, the occasion was very much enjoyed by one and all.

Yellows supporters enjoyed the sight of their team getting the ball forward a little earlier than of late, Max Aarons rediscovered his ability to cross the halfway line and there was a kind of low-level feelgood factor inside the ground which had been absent for such a long, long time.

Given a fair wind and a more, erm, aware referee than David Webb we might even be sitting in fourth place this morning but so tight is the table we are seventh – albeit that Burnley and Sheffield United have bolted and are surely in the top two to stay and we are only three points ahead of QPR in 13th.

Interim bosses Alan Russell and Steve Weaver have made all the right noises and certainly have reintroduced some confidence into our shrinking violets from what we saw the other night.

It’s too early to tell but there seems to be a groundswell of opinion that Russell and Weaver might be worth a punt between now and the end of the season, not least here on MFW where Steve Cook and Gary G [together with many of you lovely readers] have raised no objection to this at the first opportunity, and I’d like to add my name to the list herewith.

We won’t spend Jack in January, the playoffs would now be a bit of a bonus, and Russell and Weaver have shown more personality in 48 hours than those who shall not be named exhibited in over 12 months.

Give ’em a go, says I. Particularly when I see the links to people such as Scott Parker, David Wagner, and that retired Swiss furniture maker who coaches Old Boys of Bern every other Tuesday morning and also sells programmes in French, German and Italian at the Wankdorf Stadium*** every matchday.

Is my real reason for taking this stance Bruceophobia?

While suffering from this nasty condition in a very severe manner, I honestly wouldn’t mind giving Allan and Steve a chance. I’m kind of channeling Dave Stringer and Mike Walker here rather than Gunny Snr or Peter Grant, of course.

It was great to hear heartfelt tributes to Pele from both Alan Russell and Royals’ manager Paul Ince. Russell said he was lucky enough to spend a whole day with the great man and said: “Most people who are real legends are kind and humble. He [Pele] definitely was.”

Ince added: “When I think of Pele I think of Gordon Banks and that header. It is the most iconic moment in football.”

Christoph Zimmermann was also warmly welcomed back to Carrow Road. Wish I’d been there Zimbo, you were bleedin’ marvellous for us!

So there are lots of reasons to be cheerful – over to MFW regular Don Harold for his thoughts from the Upper Barclay:

“Everything felt better last night. On the way to the ground, everyone was upbeat and looking forward to the match, which was the opposite of how it had been for quite some time.

“The attacking team picked by the previously anonymous coaches suggested different things were going to happen, but the first-minute opening up of the midfield culminating in Grant Hanley fouling on the edge of the box gave me a familiar feeling of pessimism.

“However, we were more attacking and at least we gave the ball away in their half rather than the edge of our penalty area [Ha! – Martin].

“The second half was good, sometimes very good. We always looked to get forward and dominated throughout. Adam Idah scored a cracker and we looked as though the long-awaited home win would come. However, something clumsy happened too far away for me to see [a refereeing error with Kieran Dowell the unfortunate victim – Martin] and Andy Carroll scored the penalty to give Reading a draw.

“Everything was better. The crowd were buoyant throughout [kudos to the drummer) and the players played with more confidence than they had for a while. However, the fact that Angus was kept quite busy suggests there is a long road ahead.”

Being NCFC there has to be a little sting in the tale, in this case these somewhat hypocritical musings in Zoe Webber’s programme notes:

“Their [Russell and Weaver’s] goal will be to unite the fanbase and give the team a vital lift in the remaining months of the season.

“We believe that this can be done.

“With your total support, we are convinced that our objectives can still be achieved this season.

“We have a passionate and loyal fanbase, and we want to reward this by asserting ourselves and dominating matches, particularly at Carrow Road.”

If that’s an olive branch, you can bet the folding in Mark Attanasio’s moneyclip that it’s thickly coated in birdlime.

I will leave you good MFW readers and writers with my best wishes to one and all for a Happy New Year. We need one.

I shall also leave you with a word conundrum.

I don’t use an ad blocker and have been followed everywhere for the last six weeks by enticements to sample Delia’s Canary Catering.

One of the headline catchphrases used repeatedly is:

Book a 3-course meal at Delia’s. Fine dining at the heart of Norwich City Football Club.

Does this refer to the physical location of Delia’s Bar and Restaurant or does it describe the raison d’etre of Norwich City Football Club for at least one prominent individual for more than 20 years?

*** Don’t even think of complaining to the management about profanity – Young Boys of Bern really do play at a stadium of that name.