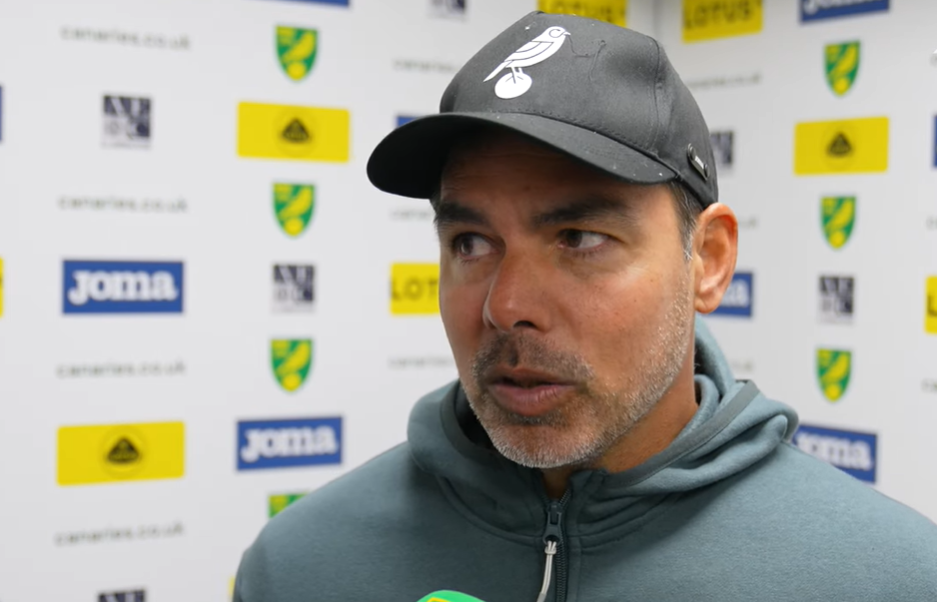 So the start of a new era at Carrow Road.  Having only held one training session, it was always expecting a lot from David Wagner to have much of an impact on City but, as they say, it’s the hope that kills you.

From the off, there was a lot to like. While City weren’t quite into a full gegenpress, they were noticeably sharper and quicker to close Blackburn down. As early as the third minute, City nicked the ball but Gabriel Sara couldn’t quite guide the ball in behind the Blackburn defence. From this, Blackburn broke quickly and Grant Hanley was forced to concede a free kick.

In the fourth minute, City won the first of 20 corners. Sara took it and there was a clash between Hanley and Wharton – the Blackburn man receiving lengthy treatment before being replaced.

City were at times producing slick football, with some neat turns and flicks getting them moving forward quickly, yet all too often Blackburn were back in numbers and stifled the final pass.

On 15 minutes, Sara laid the ball off nicely, Max Aarons had his fullback one-on-one and won a corner from his attempted cross. The ball was swung in and a powerful Hanley header was tipped over by Pears.

The resultant corner was blocked for another corner. This time Nunez took it but it didn’t beat the defender at the near post.

City continued to pressurise Blackburn in their own half. Dimi Giannoulis won the ball but Aarons had his shot blocked, and then on 20, a neat Adam Idah flick put Onel Hernandez away on the right, whose cross was cleared.

At the other end, Tim Krul was showing his rustiness with some wayward kicking going straight out of play.

Blackburn won a corner which was easily cleared. It was all pretty comfortable and as City moved out from the Blackburn corner, Kenny McLean played a great ball across the field to Giannoulis. He then put Hernandez away who cut the ball back to Teemu Pukki. Somehow the Finn managed to put the ball over from close range when it looked easier to score.

Carrow Road was quiet. Not the library silence of recent weeks, more the hum of conversation as the fans that were there made their initial verdict on Wagner’s team.

And then Hanley made a huge error.

He received the ball on the left of the area and as Dack pressured him he hit a weak backpass to Krul, failing to spot the onrushing attacker.

Krul did well to recover and block the effort but Dack was able to roll the ball to Vale, who sidefooted home. To be fair to Hanley, Andy Omobamidele had a chance to track Vale but was statuesque, but the City captain cannot escape the ultimate responsibility for the goal.

City tried to hit back with a neat move on the left by Pukki. Hernandez cut back into the box but was easily dispossessed – the story of the Cuban’s afternoon once again.

As the heavens opened, Nunez had a shot deflected over, from the corner. City had two more shots blocked. Blackburn were the epitome of a team parking the bus, filling the area with bodies.

As the half drew to a close, Blackburn broke through Brereton Diaz. He cut back inside Omobamidele but lashed his shot well over.

The second half was more of the same. Pukki won the ball in the middle with a flicked header, and Giannoulis made a run and won a corner. It was played to the near post but Idah’s header went up in the air, rather than flicked across the box.

On 52 minutes, Carter was booked for timewasting at a throw-in. Strange for him to receive a card so early in the half when, as the game went on, many more blatant efforts passed unpunished.

After 56 minutes, Wagner had seen enough. Off went Idah, Hernandez, and Nunez, with Kieran Dowell, Jordan Hugill and Danil Sinani the replacements.

It was all City now, like a defence v attack training game. Pukki got the ball in the box but was blocked every which way he turned.

On 63 minutes, City moved the ball well up the pitch. Aarons got on the end and burst into the box, forcing Pears to tip the goal-bound effort over for the tenth City corner. It fell to Sinani who had a free header yet somehow ducked under it and the ball hit the back of his neck and harmlessly wide.

Five minutes later another good move. Sinani played a clever ball through the middle to Pukki, who was through but wide, and his cutback just eluded Hugill.

Another corner. Two half-shouts for a penalty. Then a high ball hung up to the left. Sinani played it back in but Pukki’s flick at the near post went off the outside of the upright.

Then City lost possession playing out from the back. For a moment, Blackburn were 4 v 3 but lost the ball initially. When they won it back, Hugill committed a foul leading to a Blackburn free kick.

The resultant ball in was dangerous dipping and curling but somehow it was met by Hanley who tucked it off the post for a corner.

The remaining 12+5 minutes contained another eight City corners. Hugill had a powerful header tipped over by Pears and McLean hit a weak shot through a crowded box. Omobamidele also had a weak header, and Sinani a shot deflected wide from a Hugill knockdown.

The final corner, number 20, was met by Hanley and headed wide as the referee blew his whistle.

So it’s proven that, despite the positive energy exuding from David Wagner in the pre-match club publicity, he’s not a miracle worker and will need more than one session to reverse City’s woes.

There were improvements – a positive and attacking shape, a more effective high press but while at times there was some faster, slicker football, in general City were still too slow and most importantly, too predictable.

Of the subs that came on, only Sinani made a real impact. He played some intelligent balls through toward Pukki whereas, all too often, City opted for the predictable wide ball to Aarons.

Wagner now has a week to work with the players. With Josh Sargent and Todd Cantwell missing, he has the potential to add quality to the match-day squad, but the real test will be whether he can use the time to meld the team into a cohesive unit for the first time in 18 months.