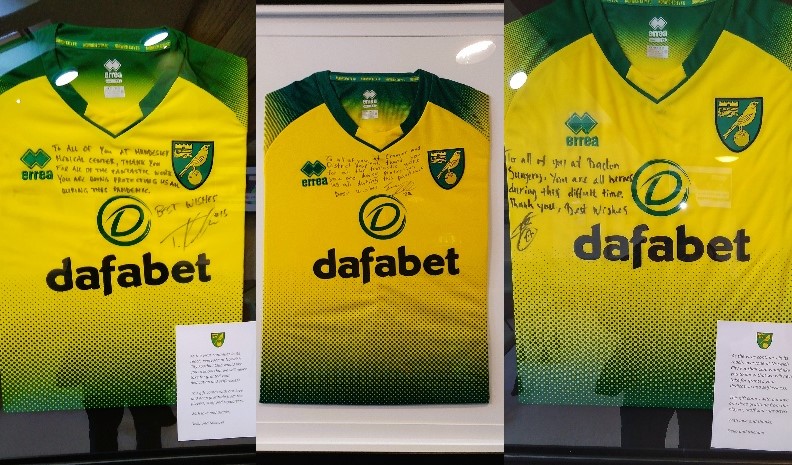 What do popular TV historian Neil Oliver, actor and enthusiastic amateur archaeologist Tony Robinson of Blackadder and Time Team fame, and Martin Penney of MFW “I always make sure to blame the Board before it blames me” infamy have in common?

We all love a bit of the jolly old British history, that’s what, and discovering the odd long-lost enigma is always a bonus for all three of us.

I am delighted to say that just before Christmas I blew both the affable academic and the guy who is never afraid to conceal his personal political views*** from his television audience straight out of the North Sea with my discovery.

I discovered a football club whose empathy with its supporters and the local community at large was once so genuine and natural that it did not even feel the need to issue a press release concerning the doing of a particularly touching deed.

Let me take you, dear reader, back to the Covid-dominated dark ages of 2019-20 secure in the knowledge that whatever happened as recently as last week is history.

The Club had officially announced that older and vulnerable supporters would be given a telephone call by a player or a member of NCFC staff to see if they were okay, if they needed anything the Club could realistically help with, and how they were coping on a personal level.

I drew the long straw and got my call from the nice guy that is Phil Lythgoe, who I had actually met a couple of times before. I didn’t tell him that as it would have taken too long and he most likely would not have remembered me anyway but we had a laugh and I must admit it put a bit of a spring in my step for a while.

I’m sure many MFW readers of a similar vintage would have experienced the same thing and I’d love to hear who you spoke with!

What I discovered can seemingly be traced to the goodwill of somebody I have often cast as the Queen of Mean, one Delia Ann Smith CH CBE [b.1941].

In late November, I went for a blood test at Mundesley Medical Centre and noticed two framed Norwich City 2019-20 match-ready shirts on the waiting room wall. Quite when they were put up I do not know, but they weren’t there in the summer. I didn’t want to waste the receptionist’s time by asking, so just requested permission to take my photographs.

Both bear the following message:

“As the virus continues its reach, everyone at Norwich City Football Club would like you to know that we will never take for granted your dedication and selflessness.

“This gift comes with our love and deep gratitude from the players, staff, and supporters.

“With love and thanks, Delia and Michael.”

The bold type to highlight the word supporters is mine. At that time it was freely acknowledged that we would wish the medical staff all the best as well.

The shirt on the left of the triptych is signed by Timm Klose and the one on the right is from good ol’ Tetts.

But our right winger just might be throwing up a conundrum all of its own.

Bacton is a small satellite surgery to Mundesley and is not by any means always open. Maybe the practice manager thought the Tettey shirt would be better off at Mundesley where many more people might see it.

However, there is also a Bacton in Suffolk, not too far from where Delia and Michael live. Was the shirt originally intended for my neck of the woods in the first place? I doubt I’ll ever know and I’m certainly not rude enough to ask.

The one in the middle resides at Cromer Hospital and is very obviously from Teemu Pukki. MFW commentator 1×2 says that many Finns have excellent spoken English and our Teemu is certainly no slouch in the written department either. Neither are Timm or Alex, of course – and having seen the originals close up it is definitely spontaneous and “all their own work”!

The caption under the GOAT’s shirt is slightly different and introduces an anomaly in time that Tony Robinson would have feasted on [but I don’t care]:

“This football shirt was kindly donated by Norwich City Football Club to the staff of Cromer Hospital recognising their contribution during the 2020 Covid-19 pandemic.”

At the end of my anything-but-thorough investigations, I am left wondering about one thing. All good historical finds should leave you that way of course.

I have lived toing and froing between North Norfolk and the City for over 20 years now and cannot think of any particular connection with the area that Delia might have. One or two high-profile restaurateur pals maybe [sorry Mr. Blackiston but I prefer Mary Jane’s to No.1 Cromer – probably my working-class roots showing again] but beyond that, I’m not so sure.

If that is indeed the case, just how many of these signed shirts were sent out across the supporter catchment area? Humongous amounts?

And without a single puff from the PR popgun – that I can recall anyway.

So the good times when we all really felt part of something special weren’t that long ago, now were they?

I would love to have run this article past the Club to both find out a little more about the shirts and also to show that MFW tries to offer the spirit of giving credit where it is due but I freely concede – and sincerely hope – that they will have more important matters on their collective minds right now.

*** Tony Robinson’s politics are not for me, but Neil Oliver is my type of guy if this recent quote from breakfast TV is anything to go by:

“I’ll be honest. I don’t know what’s happening in Ukraine. I don’t understand it either [but] I do know that I don’t trust Putin, or our government, or Europe’s governments, or the governments of North America either. I certainly don’t trust any of them to tell the truth”.

Dedicated to a real man of musical mystery. Every time he picked up his white Strat you never knew what was coming, although Stevie Wonder did here!