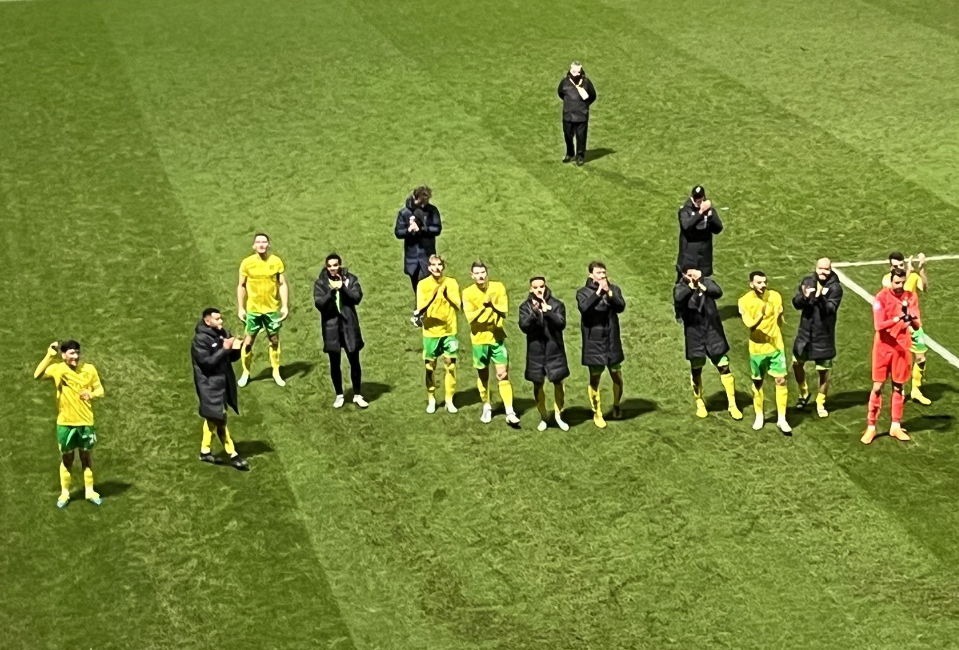 What a difference a week on the fields of Colney can make. Wow.

Obviously, it’s important to not get too carried away – just three points – but so gloomy and miserable have the last 14 months been, sod it. Let’s dream.

It was the type of performance we’d spent the last year and a bit yearning for – the type where the technicians are given licence and freedom to create; where the whole team plays two ticks quicker than is comfortable; where there’s intensity in every area of the pitch; and where there is a shape and structure in which every player is comfortable.

I’m sure, if asked, Dean Smith would say he wanted his team to play in that exact same way but, for whatever reason, he just couldn’t deliver it. In almost every metric, his Norwich City team was the antithesis of the one we watched yesterday.

It goes without saying that David Wagner will have trickier days ahead, and it’s also fair to say Preston didn’t make life as difficult for City as we had anticipated, but there was nothing not to like about that performance.

Even the odd wobble at the back feels like a price worth paying if it means the team is playing on the front foot and is unafraid to commit numbers forward.

And let’s not forget, Wagner didn’t play this safe. Not one bit.

Would anyone reading this piece have opted for Tim Krul in goal ahead of a fault-less Angus Gunn? Would anyone have given the previously leaden-legged Kieran Dowell the nod ahead of any of the other attacking midfield options?

And I’m not sure too many of us would have given the left-wing berth in the starting XI to Onel Hernandez.

But all three delivered – even if Krul did have a couple of nervy first-half moments with the ball at his feet. When it mattered, in those opening moments of the second half, he stood tall.

Dowell, so often on the periphery and struggling with the intensity of Championship battle, was front and centre of all things good and offered that priceless commodity that’s a must for all good teams – goals from midfield.

Onel continued to do Onel things but this time with extra men in the box – the big difference being his crosses didn’t have to be precise and could instead (to use an annoying phrase) be played into an area. Also, his high-energy, hard-running style is well-suited to the tempo that Wagner wants this side to play at.

He and Dowell couldn’t be more different, but both brought their own qualities to yesterday’s party.

So, kudos to Wagner for including names most of us wouldn’t. That, Boris Johnson, is what it really means to get the big calls right 😀

But it’s one thing selecting personnel you think can play the style of football that you want, it’s another to get your key messages so embedded that in the heat of a Championship maelstrom, those players deliver them.

Against Blackburn in the FA Cup, those messages had just started to seep in and there were a few promising signs amid much of the stuff we’ve watched all season, but a week at Colney, which included a return to the double training sessions, has rejuvenated what looked a tired, jaded and struggling group.

The issue of fitness may still be one – you can’t make a huge difference in seven days – but with sports scientists and conditioning teams on board who measure the players’ metrics on, I believe, a daily basis, it’s hard to believe they were quite as unfit as they appeared.

Maybe it was more a state of mind, and the sharpness and zip we witnessed yesterday were being stifled by muddled thinking and a general lethargy borne of a lack of motivation.

Who knows. But the difference was stark, and his intelligent use of subs to ensure the energy levels stayed high was nigh on perfect.

And amid it all are some big names reborn. Teemu Pukki looked to have rediscovered that lost yard of pace that we assumed had gone forever and, in a flash, the Max Aarons of 2020-21 has returned to us.

While some of the flak the Scot has copped has been disproportionate, he proved yesterday that there is another level there for him to step up into. While it remains vital that we bolster the centre of the pitch with energy and muscle alongside him – Gabriel Sara did it well yesterday – McLean looked at home in the role of our deepest-lying midfielder.

Wagner clearly likes him, as does every coach he plays under, and if he performs as he did yesterday for the rest of the season, that position is his.

There were no losers in yellow, it was the epitome of a team effort, but the biggest winners were the 996 City fans who made the trip to Deepdale. Heroes all, and who were deserving of both the performance and the ovation they were given by the players at the end of the game.

Of all the good things that happened yesterday afternoon in Preston, the sight of those players, backed discreetly by their head coach, clapping the fans is the one that will endure. A togetherness, between players, management and fans not seen since Daniel Farke’s final day at Brentford – 434 days ago.

Not for the first time, I’m leaving the final word to my Dad.

“There’s something really likeable about Wagner … he just feels Norwichy”.