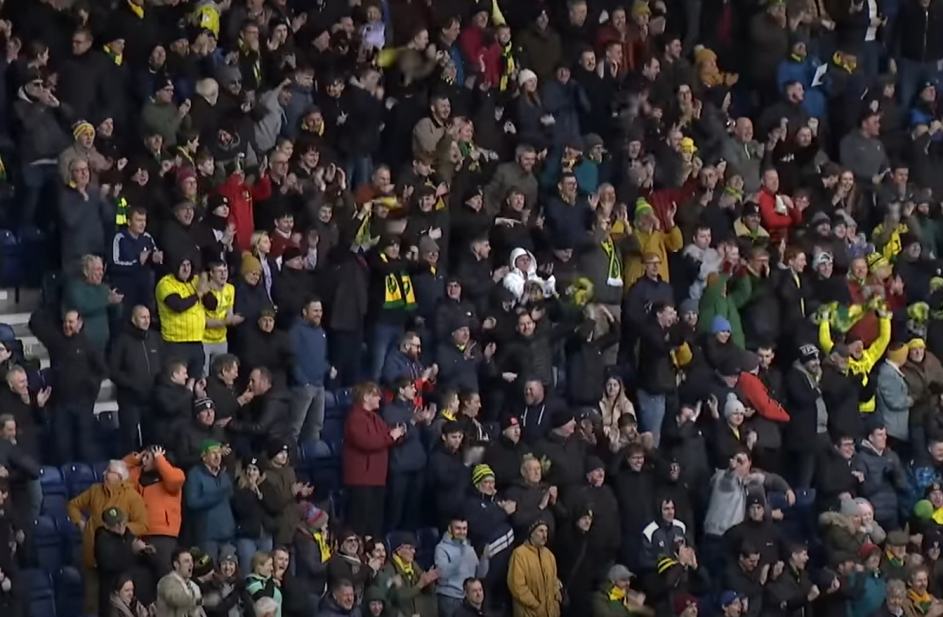 As I write this, I’m having to reach for a metaphorical book of superlatives, unused for quite some time now.

Spoiler alert. In 90 minutes, David Wagner delivered more from his team than Dean Smith managed in what was a miserable last 14 months.

Towards the end of our last promotion campaign, when Emi Buendia was out injured, Kiernan Dowell replaced him on the right and put in the sort of performance that hinted that all would not be lost in the absence of the mercurial Argentinian.

In the following two seasons, that player has been absent, hamstrung by systems that do not play to his strengths. But Dowell’s performance yesterday epitomized Wagner’s approach to his first game in charge. Dowell and City played with a natural freedom.

No one looked out of place or lost. No one had a bad game.

The evidence was there from the off. City were playing quick, tight passes. Neat interchanges and moving the ball quickly with an intensity not seen for many a year. Once they had drawn Preston in, the play was switched quickly across the pitch exposing the PNE’s back line.

As early as five minutes in, Dowell floated a superb ball onto the feet of Onel Hernandez, who found the overlapping Dimi Giannoulis to cross into the ball, claims for an apparent handball going unheeded.

Then Dowell clipped the ball to Teemu Pukki, who returned the favour only for Ledson to tackle back.

It was largely one-way traffic. When Preston got forward, City defended with an intensity that nullified the threat before it developed – Hernandez more than willing to use his pace and physicality in City’s own half.

This intensity was mirrored at the other end of the pitch. Preston were simply unable to clear the threat and the Norwich pressure built and built.

The breakthrough came on 13 minutes. Max Aarons cut inside from the right, playing the ball to Hernandez in the box. He couldn’t get a shot away and the ball was bobbling in the area. As Gabriel Sara went to ground, he swung a foot at the ball but his effort was blocked, only to arrive in the sights of Pukki who swept the ball home.

Only a minute after the re-start, Grant Hanley played the ball forward to Hernandez, who was fouled near the corner of the box, five yards out. The ball was initially cleared but Aarons showed great determination to keep it live. Kenny McLean backheeled it to Aarons as City worked it around the box before Dowell fired a delicious shot into the top corner.

At this point, it was valid to recall that City were 2-0 up against Preston at home too, albeit in much less convincing style. The players were clearly determined not to let lightning strike twice and they continued to pour forward.

On 20 minutes, McLean played a great ball to Aarons who in turn put Pukki in behind the defence. His cross beat everyone, but City kept the ball live, Pukki had a shot blocked, Dowell slipped before McLean hit a superb shot seemingly destined for the top corner.

There was still room for some nervy moments. As Hanley played out from the back, he just squeaked the ball to Giannoulis. The Greek international then ran half the length of the pitch to clear City’s lines and ultimately win a corner.

Giannoulis was involved again on 28 minutes. This time he played the ball to Josh Sargent – who was playing the Marco Stiepermann role in Wagners 4-2-3-1. Like the much loved German, he played a superb ball to put Pukki in behind the defence. As he drew three defenders across to nullify his threat, the Finn had the presence of mind to cut the ball back for Dowell to tap home into the empty goal.

Preston responded with a double substitution and formation change that seemed to breathe a bit more solidity into the worryingly porous midfield and a greater threat up front. For the remainder of the half, they made more of a game of it.

In this they were helped by Krul… a woeful chip out landed with Cannon but McLean was quickly across to spare the Dutchman’s bushes. Moments later, another poor Krul ball out and again McLean saved the day. Preston eventually worked the ball to Diaby on the right but his rushed cross sailed harmlessly over the bar.

Preston had two options at halftime. Keep it tight and avoid further damage, or come out all guns blazing. They chose the latter option and made the opening minutes of the second half uncomfortable for City.

A ball was flicked behind the City defence for Delap to run through on goal. Krul was out quickly to smother the chance.

City broke back. A Hernandez backheel put Giannoulis free on the left. His cross found Sargent who had so much time to control the ball and measure his shot but managed to blaze over.

Hernandez came forward again. His cross again came to Sargent who turned and shot, but his effort was deflected for a corner.

Preston broke back. It was more like basketball than football.  This time Cannon hit the ball well but somehow Krul touched the ball onto the crossbar, now fully redeemed for his first-half gaffes.

As the ball bounced out from the corner, deep in his own half Pukki flicked the ball over the defender’s head. He caught up with the ball on the halfway line and tore forward, Woodman doing well to keep his subsequent shot out.

After such a chaotic start, City then re-imposed themselves on the game, building pressure once again and denying Preston the ability to break out.  A number of chances came and went.

Sargent seemed to be having one of those afternoons. Whenever the ball came to him in crucial areas, something seemed to conspire to stop him from getting a decent effort away. On 66 minutes he had his clearest chance when McLean put him through, only for the keeper to save from the luckless American.

With Wagner preparing his first substitutes on the bench, a rare Preston attack saw McLean blocked in his own corner at right-back. His audacious back heel found Aarons who played a booming ball forward towards Pukki, who was the only City player forward.

Pukki ran the ball forward, turned to half-shield the ball before twisting the defender inside out to get through on the keeper. It looked like his touch was too heavy but he stretched out his left boot and toe poked the ball into the net.

Danil Sinani, Liam Gibbs and Adam Idah came on for Dowell, Pukki and Sara, all of whom had played well. Sara looked busy, neat and played some attractive balls through the Preston ranks.

In return, Preston brought Robbie Brady on. His first touch was to foul Idah and earn a yellow card.

McLean then did superbly well, powering forward towards goal. With Sargent one side and Idah the other, he elected to shoot but his effort was straight at Woodman in the Preston goal.

Wagner then brought Jacob Sorensen and Marcelino Nunez on, with the Dane slotting in at right back – another position ticked off in his efforts to be an entire team in a player but most importantly a very welcome return from injury.

City had more chances as the game drew to a close. Just before the final whistle, a beaming Stuart Webber left his seat behind Delia and Michael, to emerge at the touchline as the final whistle went to deliver a hug to his man Wagner.

The German marshalled the entire squad into a line in front of the City fans, applause and enthusiasm flowing both ways.

So how did he do it?

Somehow City looked so much more cohesive and comfortable than they have since the last promotion.  Even when Smith played 4-2-3-1, the players seemed stifled, unsure and underconfident.

Wagner gave them the freedom to attack and move forward. This left vulnerabilities. There will be teams that exploit this in the future, but certainly, at this level at least, City showed that they have the ability to hurt anyone back in equal measure.

How this develops over the coming months will be fascinating, breathless and exciting. Long unused words in my match reports for sure.