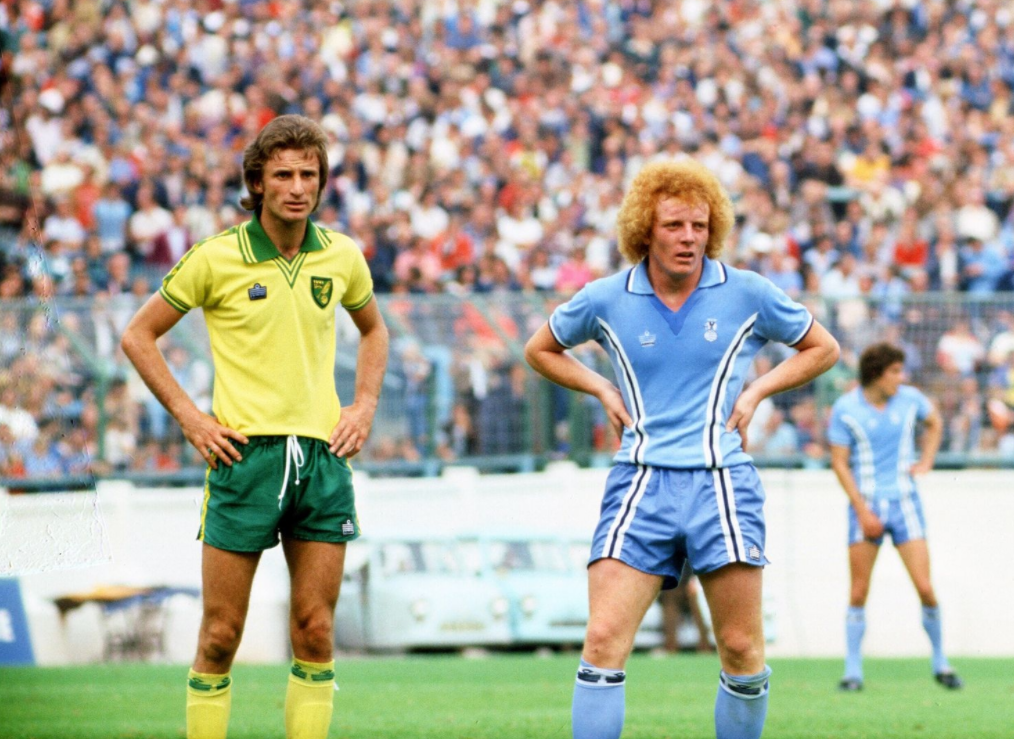 Next up for Norwich, a team that plays in sky blue but isn’t Manchester City. FA Cup winners in recent memory, once top-flight regulars and Premier League founder members, Coventry City fell on hard times and, prior to returning last season to the CBS Arena, spent eight homeless seasons bouncing around the lower leagues.

But the Sky Blues, under the stewardship of ex-Norwich striker Mark Robins, have a brighter, more secure future to look forward to with businessman Doug King finally taking on the 85% stake in the club once owned by the controversial SISU Group. And with their short-term future at the CBS Arena also assured, things are starting to look rosy for the Sky Blues and their fans.

All of which adds up to a tricky incoming Saturday lunchtime for Norwich.

We have a long history of meetings with Coventry dating back to 1908 and a first meeting (and Norwich win) in the Southern League. We both progressed into the Football League and then, in the 1930s, up together into Division Two.

Talking about those pre-war years, the 1930s certainly began with a bang for James Kerr’s Canaries. The 15th March 1930 is a date etched in our history. It’s the day we recorded our record victory – hitting double figures for the first and only time in our history. Coventry were the victims we put 10 (ten), with the final score in that Division Three South fixture, 10-2.

It was bizarre. We had lost 2-0 to that same Coventry side only three months earlier in the FA Cup. They had also beaten us 3-1 in the earlier league meeting and finished two places above us.

In the 1933-34 season, both Norwich and Coventry were challenging for the title and more importantly the single promotion spot that came with it. The two met at The Nest on 21 April 1934 in what was then the biggest game in Norwich’s history – a win and they would reach the heights of Division Two for the first time.

We held our nerve that day and got the job done, winning 3-1. In the end, Norwich were worthy champions, finishing seven points clear of Coventry.

As the saying goes, to ostracise somebody is to send them to Coventry, and from the beginning of the 2019-20 season, the Coventry football team had been sent to Birmingham to play their ‘home’ fixtures at St Andrew’s.

For 106 years Highfield Road was Coventry’s home ground. A classic compact, tight ground deep in residential Coventry, and Norwich hated it. Between October 1938 and October 1981, we lost on every visit – 19 defeats in a row (not even a draw).

The run finally ended, ironically, in the 1980-81season when Norwich were relegated with full-back Greg Downs scoring the only goal. Downs would later join, and win the FA Cup with, Coventry.

When we visited Highfield Road the following season, it was in front of England’s first all-seater stadium – an innovative idea back then that’s now standard practice these days in the top two divisions. An idea before its time, but the seats were soon removed having been blamed for a lack of atmosphere and a limited capacity.

For the record, Norwich had reverted to type – losing in front of the seats.

Coventry had developed a reputation for being survival specialists. I lost count of the number of times during the 1980s and 1990s that the Sky Blues pulled off ‘a little miracle’ – on many occasions retaining their place in the top-flight on the final day of the season (I later read this happened ten times).

For Norwich fans, 1984-85 will spring to mind, as this time we were the victims of Coventry’s late winning run, to pip us by a point, albeit in controversial circumstances after they won their final three fixtures long after we had finished our season. Never again would this happen in English football.

In 1996-97, Coventry needed to win at White Hart Lane in another battle against the odds. Of course, they pulled it off, winning 2-1. With a forward line of Dion Dublin and Darren Huckerby, the Sky Blues really shouldn’t have been in that position and the following season they finished 11th with Dublin winning the Premier League Golden Boot.

Both, of course, would go on to represent Norwich with distinction and both are members of our Hall of Fame.

As a footnote, the Tottenham goal-scorer on that dramatic final day was another Norwich Hall of Famer – Paul McVeigh.

Turning the clock back to the opening Premier League season 1992-93 and, unusually for both clubs, the first meeting that season, on 26 September 1992, was the day’s big game – a top-of-the-table clash!

Another Norwich forward and Hall of Famer with links to the two clubs was Craig Bellamy. The exciting Bellamy made his breakthrough at Carrow Road, scoring regularly in the Championship. A big move was inevitable although City fans would have been disappointed that it was Coventry who signed him.

At £6.5 million he was the Sky Blues’ record signing but one that never worked out. Bellamy scored eight goals in his single season with Coventry but 2000-01 ended, finally, in the club’s relegation after hanging on in the top flight for 34 years.

They haven’t been back since.

Our meeting on the final day of the 2010-11 season was a memorable one as it was a time to honour and celebrate Paul Lambert’s promotion heroes. It was also a chance to mock poor Sammy Clingan on his first return to Carrow Road since swapping Norwich for Coventry following our relegation to League One. The 2-2 draw did little to dampen the party atmosphere.

Since that wonderful afternoon in the spring of 2011, the Canaries and the Sky Blues have played each other five times – three in the league and once in each of the cups – with Norwich winning four, including a 3-0 win back in September, and drawing one.