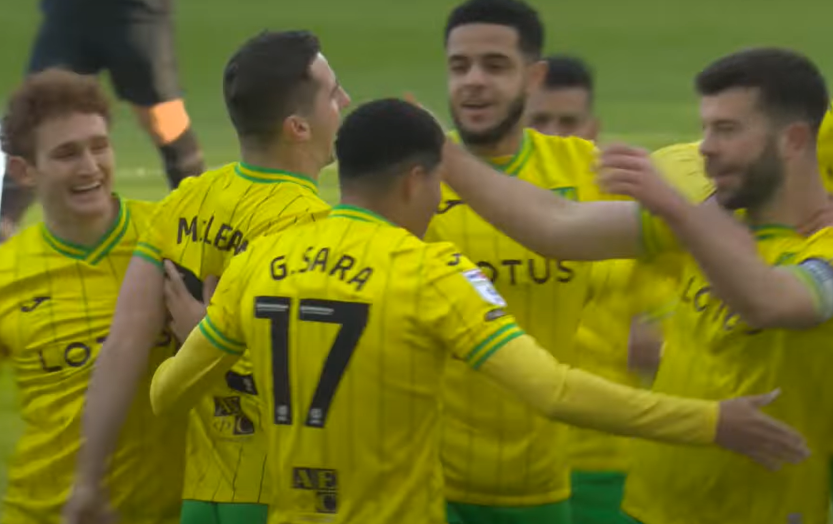 The planets aligned for me this week. Not only was I in the UK and not working, but there was an away game within striking distance AND easily available tickets.

As a result, I got a break from Canaries TV over sketchy hotel internet connections or the ‘wisdom’ of  Andy Gray on Bein sports. Instead, I had the full 4K surround sound Wagnervision version as I travelled to the CBS Arena, along with 2700 other noisy, vocal City fans, including Darren Huckerby spotted among our numbers.

City were unchanged from the previous weeks drubbing of Preston and the mood among the City fans was buoyant.

Coventry began the game with a short spell of possession but City began to turn the screw after that.

Gabi Sara had a shot blocked before City forced two corners in quick succession. The second, flicked on by Kenny McLean at the near post, landed in the centre of the box and big Grant Hanley appeared to bundle the ball home. It was later confirmed as an OG by Michael Rose.

That was on 6 minutes. Two minutes later the whole ground, fans, police, and stewards all rose as one and celebrated the life of little Amber Sheehy – taken so tragically one week ago – with a minute’s applause.

Good work on the right by Josh Sargent, a clever back heel to Kieran Dowell who in turn played it to Onel Hernandez on the left side of the box. His first touch was poor but he recovered, beat two men before slotting home, despite the keeper getting a hand to it.

Coventry briefly threatened, but their shot was straight at Ti mKrul, but then City continued to pour forward. It really felt like they could score every time they approached the Coventry box.

The full-backs were in prominence once again, Dimi Giannoulis playing the ball to Sargent, luckless last week, only for his shot to be well saved by the keeper.

The American’s frustration was not to last too long though. Sara played a superb through ball to Teemu Pukki. He was well wide of the goal but had the presence to cut the ball back and Josh rifled home with glee.

To say that the visiting end was in raptures wouldn’t be an understatement. The chants of ‘It wasn’t our fault’ were just beginning to gather pace when Coventry struck back.

A ball in from the right was headed back across goal. From the opposite end of the ground, we could see the yawning gap between City defenders, and Jamie Allen had plenty of space to pick out the top corner.

City were visibly shaken, and missed passes suddenly became the order of the day.  Krul was guilty of a couple, as was Giannoulis and it was no surprise five minutes later when Coventry got a second back.

Norton-Cuffy outmuscled Giannoulis on the Coventry right. His cross wasn’t fully dealt with and again landed in a gap between defenders for Palmer to blast home.

City nearly struck straight back. Pukki played in Hernandez who had the whole goal to aim for but somehow side-footed a curling Cabot over the bat from close range.

It was Coventry’s turn now to apply the pressure. Giannoulis was having a torrid time against Norton-Cuffy, time and time again he was turned, outmuscled or simply beaten for pace. Coventry were pressing high, trying to stop City from playing out from the back and our back four sank deeper and deeper into their own half.  The interval couldn’t come soon enough.

As the teams emerged, it was no real surprise to see Sam McCallum on as a replacement for Giannoulis.  It isn’t the first time the Greek has been pulled at halftime after being unable to cope with a direct, pacy winger. City set out with more resolve and looked to exert some semblance of control on the game.

In the opening passages, both sides wasted opportunities with shots that went harmlessly wide. In contrast to the end of the second half, City were much more adept at dealing with the Coventry press.  Sara was prominent, dropping deep, fetching and carrying, and then winning the ball back if possession was conceded.

Whatever tactical nuance David Wagner employed also meant the threat of Norton-Cuffy was diminished. It wasn’t just that McCallum kept him quiet – which he did whenever the ball got to him – but City also cut off the supply to him.

Increasingly, Coventry were forced to rely on long balls into the channels rather than the more constructive build-up of the first half.

The game was settled on 65 minutes.

Again, good work by Sargent, this time on the left to play McCallum through. His cut-back left Dowell with plenty to do but he made himself space before smashing home his third in two games.

From then on, Coventry were spent as an attacking threat. City were able to pass the ball with ease, going around and through the Coventry press. They weren’t content with four either. Pukki had a golden chance to make it five when through one-on-one with the keeper but Wilson got a foot to it and put it out for a corner.

City controlled the rest of the game, mopping up any Coventry attacks. Hanley put in one superb tackle late in the game on Gyokeres, conceding a corner in the process, but largely it was incident free.

Pukki went off late in the game with cramp – unsurprising given the amount of running he had done. At the final whistle, the away end was bouncing with glee at another three points.

It was never going to be an easy ride. After the game at Preston, the entire division got a glance at how Wagner wants his City team to play. Mark Robins made a decent stab at countering City, pressing high and effectively.

The nature of the way City play out from the back, and the fact that they are only two weeks into the new tenure meant they were always make mistakes. Largely they got away with them.

What is incredible is the transformation in some of the players. Sara was superb – a complete midfield performance. Dowell was once again a revelation. In a few short weeks, Onel has gone from headless chicken to bird of prey.

The poop deck has well and truly cleansed of the Smith era.  Whilst HMS P*** the League might not be at the head of the pack, she is ready to sail once again and has her guns trained squarely upon Wembley.