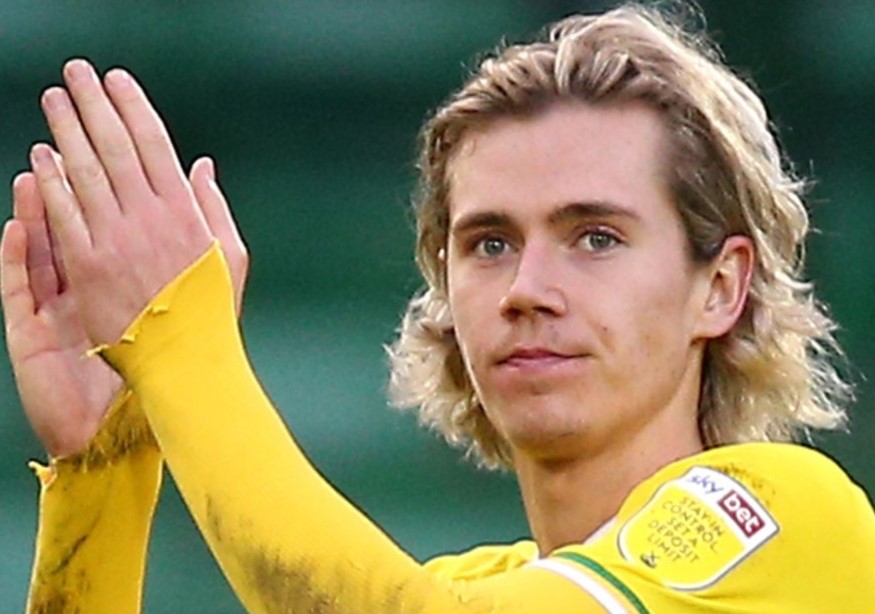 It was a moment we could scarcely believe but also the moment we dared to believe.

It was 19 September 2019. The two previous home games of that Premier League campaign had been hugely encouraging: a triumph over Newcastle and a narrow defeat by Chelsea. Now the Champions, Manchester City, were strutting about at Carrow Road.

But our City pilfered a shock lead with Kenny McLean’s header from a corner and ten minutes later, the moment arrived.

Emi Buendia, facing his own goal not far from our area, controlled a high ball, flicked it over his head and spun around to race away from his marker. A quick, stabbed pass to Marco Stiepermann was weighted so that the German could run with it without taking a touch. When Marco did play the ball, it was to slide a pass into the run of Teemu Pukki. The Finn advanced in the inside right position. Three Man City defenders stretched their legs in pursuit.

From the back of the Community Upper stand (where my wife and I have our season tickets), it was apparent that nobody had tracked the supporting sprint of Todd Cantwell. Teemu had seen him though. Of course.

As Teemu reached the penalty area, he angled a pass across towards the goal area. Todd greeted it just wide of the far with a left-footed tap-in. He jogged in triumph towards the corner flag at the junction of the River End and the Community Stand, did a daft dance, thumped the flag in exultation and made an old man high above it all very happy and a bit smug.

The previous season’s Championship title had appeared to be reward for doing things correctly and adroitly. The innovative, parsimonious recruitment, the detailed coaching, the exhilarating style, the electrifying performances … all wondrous, and all played out in front of raucous, united support.

At home, there were flags in the Barclay. At away games, the odd shout of “get rid” was always subsumed into a cacophony of encouragement as Daniel Farke’s methods bemused opponents and beguiled the football world.

So that Todd moment the following September promised so much – and Todd’s departure this week is a good time to take stock of how those promises vaporised.

I don’t know why Todd’s own potential dissipated. But there are some known factors.

As a kid coming through the academy, his parents took him out of the system for a while because he was getting so upset by defeats and setbacks that they thought it was unhealthy. More recently, there was a family bereavement that devastated him. And some of our fans – a small, young minority – appeared resentful that their peer had prospered.

I tiptoe around that last point carefully. Anyone who points out that an element of our support is more destructive than supportive provokes vilification. My own continued attempts to stop Dean Smith being depicted as a pantomime villain – an unnuanced and unfair portrait, I maintain – caused two charmless individuals to call me a “pedo” on social media this week (and the Americanised misspelling upset me more than the puerile insult).

But, as Dale Gordon explained when I was talking to him for one of the Tales From The City books: “You always seem less appreciated at a club where you’ve come through the ranks than when you go somewhere else. Some locals have seen you as a kid and see where you are now and, for some reason, they prefer the players who have arrived from elsewhere.”

He didn’t think it was particularly a Norwich thing. Nor do I. But it is a thing.

Todd wasn’t the only one not to fulfil the promise displayed in that magnificent 2018-19 promotion season, though. I had such high hopes of Stiepermann, for instance. He had much more physicality than most who play in the “Number 10” role yet he struggled in the Premier League.

And the whole playing-out-from-the-back shtick stopped working. I loved it. It epitomised what I believe about the beauty and efficacy of passing rather than hoofing, but fairly recently I chatted with a Premier League coach who said our problem in the 2019-20 season in that division was the predictability of our style.

Our “identity” was so clear and consistent that, by tweaking specific elements of the “gegenpress” (counter press) he deployed against us, he achieved two easy wins.

There were lots of those for opponents. That September triumph over Man City was despite having 10 first-team squad members injured and there were only three more wins after that.

The 2020-21 Championship charge was played out during Covid. It was weird and unsatisfactory.

My wife and I live 115 miles from Norwich and the journey to and from home and away games is part of the process for us. After a defeat, we process it on the drive home. After a victory, we wallow in it on the journey. In 20-21 we watched games on an iMac in our study and, afterwards, went to the kitchen to put the kettle on … it wasn’t the same.

And when we did have crowds to merge into and with again, last season in the Premier League, Daniel had changed the system. He’d ditched our identity. Milot Rashica was our out-ball option. Josh Sargent was a blunderbuss, with the emphasis on blunder. Billy Gilmour was the only player who wanted to pass out but made me nearly pass out by unerringly giving the ball to opponents.

I thought Matt Ware expressed an astute observation in his MFW piece about why supporters thought things were all a bit sh*t this season under Smith. I had argued that discontented supporters were conflating disparate complaints. Matt added an element to the list of grievances: our Premier League experience had been so miserable that the prospect of going up was twinned with the fear that it would bring only another abject season of defeat after defeat.

My hope was that Smith’s flexible and pragmatic approach to games might succeed in the Premier League (although, obviously, it didn’t in the second half of last season). I believed this season was a work in progress. The coaching of Smith and Craig Shakespeare, both widely admired, had fine-tuned Sarge’s finishing and were getting a fine tune out of Aaron Ramsey. I could see what a fit Isaac Hayden would offer.

I understand and accept all of that was a minority view. The accepted narrative – that it was all a Smith and Shakespearean tragedy – is now the established wisdom. The case for the prosecution has been enhanced by what David Wagner has achieved.

I am in lunar orbit about what Wagner has orchestrated (do you see what I did there?). The second half at Coventry, when calm control was established, was probably even more impressive than the frenetic opening movement that day.

Will any of it work in the Premier League? Let’s just get there and find out. Playing in the Championship only makes any sense if we are striving to get out of the division.

And it is surely possible that if there is to be another moment like that one in September 2019 it will be a prelude and not a futile peroration.

Either way, good luck Todd. Your talent is immense and extravagant. You were, and are, one of our own.