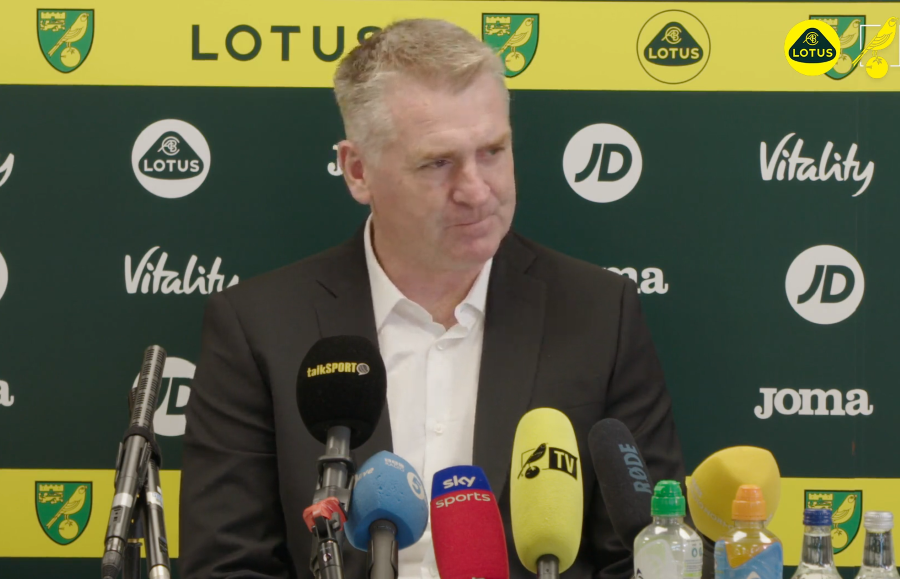 The ambition debate is not an unfamiliar one to Norwich City fans.

From Premier League season to Premier League season, especially since Stuart Webber’s arrival at Carrow Road, the Canaries have been ridiculed nationally for failing to ‘have a go’. Little effort has been made to understand the nuances of City’s model, and it’s a sentiment that’s inspired abundant frustration in Norfolk.

When success is found at Championship level that model is heralded, but at the top table – where City are front and centre and the world is free to judge – it doesn’t hold up. Never mind the faux passion that railed against Super League proposals and the plight of clubs like Bury and Bolton Wanderers, hungry neutrals want a football feast and Norwich just don’t satisfy their tastes.

It must be said that under the Daniel Farke regime, little effort was made to communicate the ambition at Lotus Training Centre. Webber was signing international players and bringing in household names, while those around him were playing down the ambition this showed. Farke referred to the disadvantage his self-funded club was burdened with at almost every opportunity and the club’s internal top-17 goal was not made public for months.

The City sporting director did eventually produce some fighting talk of his own, but the real turning point came on Wednesday afternoon when Farke’s successor finally put his new club’s ambition into words.

“Mine and Craig (Shakespeare)’s job is to keep us in the league this season, and that’s firmly what we believe we can do,” said Dean Smith. “If I thought it was a risk then I wouldn’t have taken [the job]. We’ve got 27 games left in the Premier League, there’s a lot of points to play for, and we’re just off the back of a win.

“I’ve seen how progressive this club has been, there’s enough quality, and that’s the biggest thing. Our aim is to stay in the Premier League, and if we can do that I think there are great building blocks and, hopefully, we can build on them.”

Perhaps what Norwich needed was a man to whom the Premier League was familiar, whose last 87 league games have been in the top division and who isn’t ready to give up that status just yet. Perhaps what they needed was simply a passionate speaker, whose targets weren’t hidden and whose statements were clear.

Of course, Smith must produce results on the pitch as well as in the press room, but nothing on his CV suggests that he won’t do so.

The ex-Brentford manager arrives in NR1 with more pedigree than the large majority of men who’ve gone before him. He boasts a history of promotion, Premier League survival and a huge hand in the development of England’s most expensive ever player.

The great City coaches; Mike Walker, Paul Lambert, even Farke, were on the up when they led the Canaries, hitting the peak of their managerial careers as they sealed the job.

That Smith was seen as the non-big-name candidate ahead of his appointment now seems bizarre in itself – Norwich have gone from hiring an unknown coach from the German fourth division to acquiring a man who contentiously lost the Aston Villa job, and yet some, charmed by the bright lights of Frank Lampard, preferred a more glamourous character.

Whether City’s new head coach can produce the type of performance they need at home to Southampton remains to be seen, but this is a great opportunity for him, and he’s certainly addressed fans in the right way.

Among the managerial search, what’s been lost by the masses is the fact that three wins from three matches against the Saints, Wolves and Newcastle would equal the Canaries’ points total to their games played – the fight isn’t nearly over yet.

Norwich have known that all along, but they needed somebody to say it.